CULTURE 【Tasty China】Fight the frost with these spicy winter dishes

【Tasty China】Fight the frost with these spicy winter dishes

The inevitable has finally arrived, and the bitterly cold winter is here. While it may be a tall order to even leave your house these days, eat you must. Luckily, China’s array of spicy cuisine offers just the kicker to defrost your icy veins.
The chilli umbrella hosts quite the variety of heat, which can broadly be found in three provinces: mala(numbing spice) from Sichuan, ganla (dry spice) from Hunan and suanla (sour spice) from Guizhou. Seasoned masochists of the Chinese culinary bent will likely be familiar with the first two; the third is an underrated but diverse world of sweetness, spice and... Lao Gan Ma chilli sauce.

One of China’s most well-known culinary exports is the uniquely numbing spice of the Sichuan pepper found, unsurprisingly, in Sichuan dishes. These punchy plates are less gut-busting on the Scoville scale than their Hunan cousins, but the humming mala buzz will test your tongue in other ways altogether. 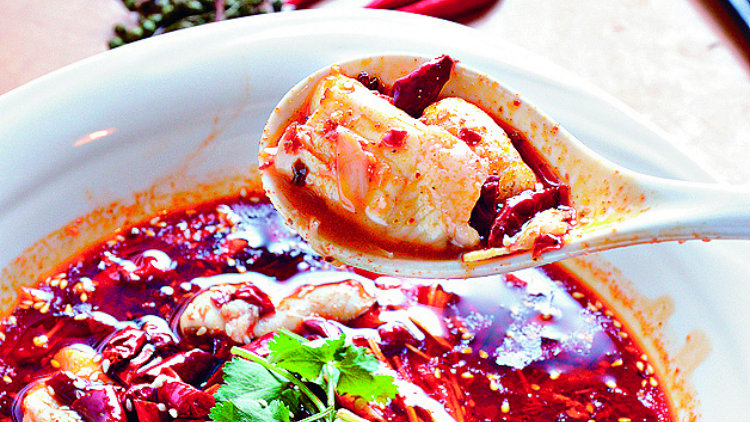 Thin slices of fish are served in a large bowl full of oil, chillies and bean sprouts. Don’t let the oil intimidate you – pick up the slices of tender fish and the oil glides back into the bowl. 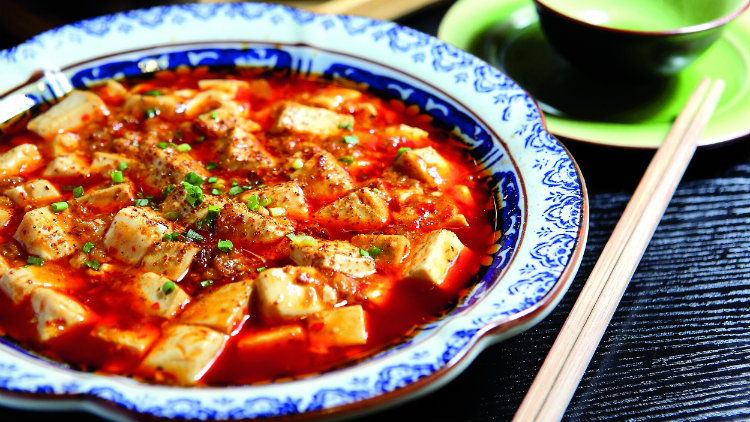 A classic that’s at home on pretty much every Chinese menu but originates in Sichuan. Cubes of soft tofu are simmered in a sauce of soy paste, ginger, garlic and, of course, Sichuan pepper oil. The resulting stew is fiery on the eye and the palate, but it’s generally mild enough to be enjoyed by the spice-shy as well. When it’s not served with the traditional minced pork, it’s also a standout vegetarian Chinese dish. 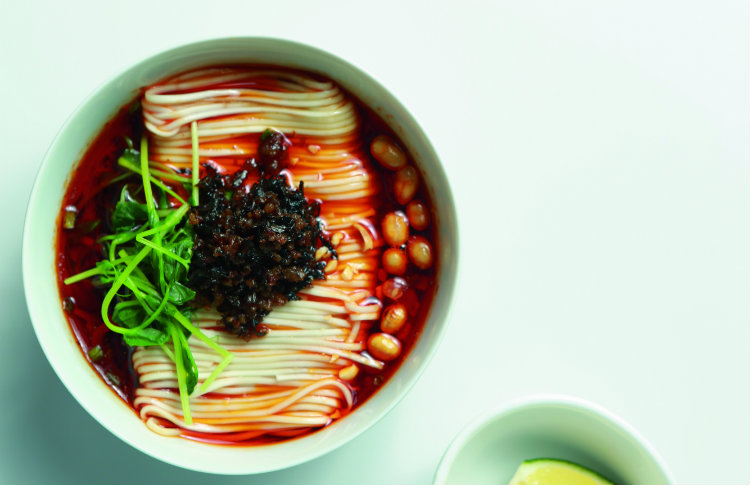 Thin, hand-pulled noodles lay in a shallow bowl of chilli and Sichuan pepper oil, which is topped with a smattering of peanuts and fermented chilli paste. You’ll sometimes find it served with preserved vegetables or minced pork as well, but generally this is a delightfully simple dish.
If you can’t handle the spice... try yuxiang qiezi (鱼香 茄子), another Chinese-via-Sichuan classic that varies hugely but is typically a gooey delight of sticky, sweet braised aubergine, coated in a thick sauce of soy, sugar, vinegar, garlic and ginger.
Get it at Zhang Mama, the supreme champion of hole- in-the-wall Sichuan joints.

The real mofo of Chinese spice, Hunan’s fiery food has even been credited with fuelling the political energy of its most famous agitator, Chairman Mao. Heavy on the fresh chillies, Hunan dishes will have you sweatin’ like the Sahara, no matter how chilly it is outside. The Hunanese are big fans of smoked or cured meats, so expect a salty tang to your spice. 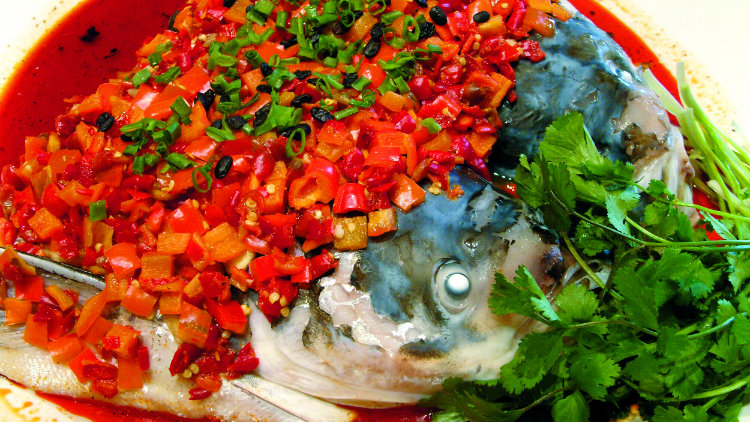 A giant freshwater fish head is steamed to a gelatinous finish, and then topped with truckloads of fresh, dried and pickled chillies. Some soy sauce and fermented black beans are thrown on for good measure, but the main event here is the spicy triple threat. 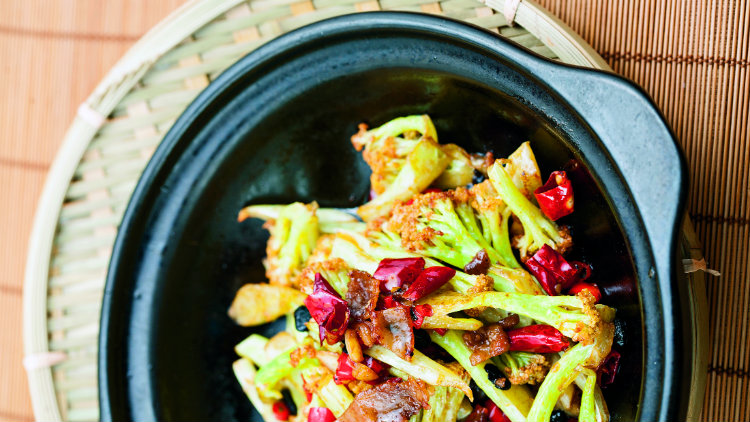 Dry-pot cauliflower is another one of those dishes that is now pretty ubiquitous across Chinese greasy spoons, but the original hails from Hunan. Fresh cauliflower is tossed with chillies and cured bacon; the lack of sauce means that every bite of this dish packs a flavourful punch.
If you can’t handle the spice... try hongshao rou (红烧 肉). Fatty, fabulous cubes of pork belly are braised in a sticky-sweet sauce of light and dark soy sauce, chillies, spices, sugar and rice wine. The meat is so thoroughly cooked that the cubes just about melt in your mouth – an almost creamy antidote to the rest of your doubtlessly fiery meal. Cut out the soy sauce and you have Mao shi hongshao rou (毛式红烧肉), the same dish but served just how Chairman Mao liked it.
Get it at Nice Rice – the ingredients are reliably fresh, the price reasonable, the vibes relaxed.

The underdog in the Chinese spice contest, the ethnically diverse province of Guizhou has a range of minority cuisines that are all dedicated to the burn. There’s a saying that Sichuanese people bu pa la – they’re not afraid of spice – but that the Guizhou people pa bu la – they’re afraid of the dish not being spicy enough. The heat here typically is puckeringly sour, which softens the blow – handy when breakfast through dinner is one big spice-fest. 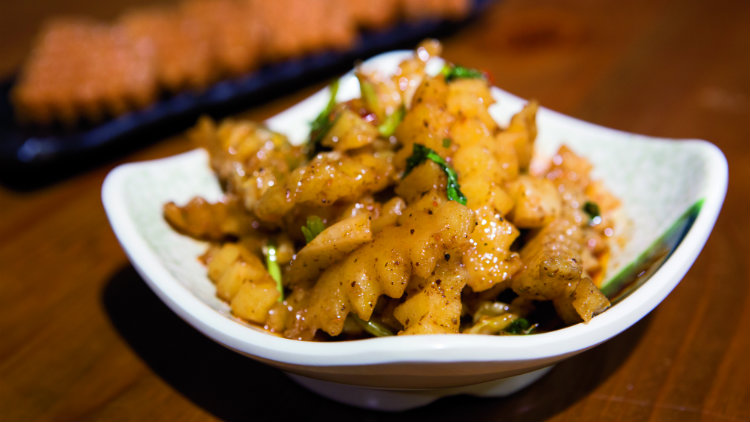 This 'pineapple potato' dish is actually fruit-free – the pineapple moniker refers to the crinkle-cut slicing of the potatoes. This unassuming appetiser is more fiery than it looks – the veg swim in a pool of suanlaoil that will make you feel the burn. 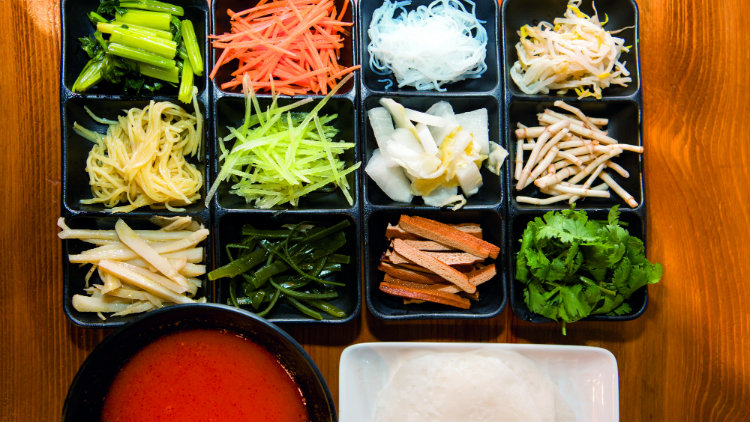 A dish that combines two Guizhou stables: sour soup and siwawa, 'silk babies', DIY parcels in which shredded vegetables are wrapped up in glutinous rice flour pancakes. Silk babies aren’t in themselves spicy, but when dipped in the bright-red sour chilli tomato soup, they pick up the heat.
If you can’t handle the spice... try huanggao ba (黄糕粑), a traditional Guizhou sweet snack – warm baked cakes of sticky rice and sugar syrup. The thick, creamy texture is sure to mollify any scorched tongues.
Get it at Beimen Zhangjia, a cheap and very cheerful Guizhou joint on the east side of Jingshan Park. 2 Daqudeng Hutong.