The Chinese war epic, "The Eight Hundred," is slated for release on Aug. 21, and its advanced screenings last Friday gave confidence to the market and the film industry.

The 147-minute film depicts the so-called "800" Chinese soldiers' defense of a warehouse against the invading Japanese army during the Battle of Shanghai in 1937 when the actual number of soldiers was just more than 400. It stars Wang Qianyuan, Zhang Yi, Jiang Wu, Li Chen, and Oho Ou, and is directed by Guan Hu, whose best-known works include the 2015 film "Mr. Six." 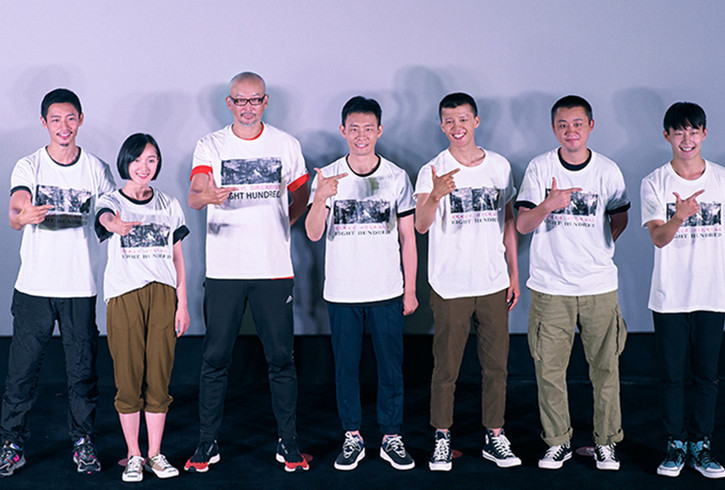 Director Guan Hu and his crew pose for a photo at a premiere event of "The Eight Hundred" held in Dandong, Liaoning province, Aug. 14, 2020. (Photo courtesy of Bravo Entertainment)

"The COVID-19 pandemic has had such a great impact on the Chinese movie industry. Under this premise, we tell stories of these grassroots soldiers in a desperate situation. May what they did in the film inspire everyone beyond the film," Guan said in Dandong, Liaoning province, where he was shooting another war film about the Korean War.

Huayi Brothers Media, Alibaba Pictures, Tencent Pictures, and many more invested in "The Eight Hundred." It will be the first major Chinese production to hit movie theaters since the COVID-19 outbreak. The film is also the first blockbuster shot entirely with IMAX cameras in Asia and the third in the world only behind "Avengers: Infinity War" and "Avengers: Endgame."

The film took Guan a decade to make. According to the film's producer, Liang Jing, also an actress and wife of Guan, the first screenplay draft was created in 2011, and the film received funding from Huayi Brothers Media in 2015. The film started filming in September 2017, and now it can eventually be released to theaters.

"I think this is a historic moment," Liang said, "this film represents a leap in the Chinese film industry in terms of industrialization."

After the advanced screenings in five cities, many were in tears and applauded the "The Eight Hundred" crew's efforts. "I cried several times," actor-and-director Wu Jing said, "this film took China's war film genre to another level."

Director Feng Xiaogang was also in attendance. He said he was touched by it. "Since cinemas reopened in China, the trailblazer for the Chinese film industry is 'The Eight Hundred,' and it can take the responsibility to revive the market."

"The Eight Hundred" took in 14.38 million yuan for its premiere and advanced screenings on Aug. 14, an impressive achievement considering limited screening schedules and COVID-19 prevention and restriction measures. From Aug. 17 to 20, it will have advanced screenings every night to build up enthusiasm before its official wide release on Aug. 21.