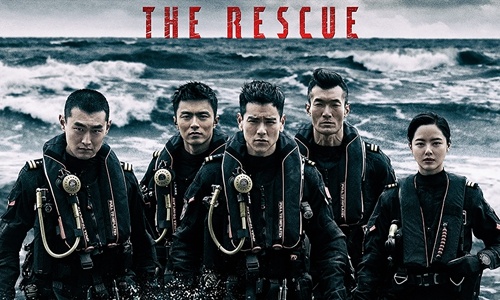 Promotional material for The Rescue.(Photo: Maoyan)

China's first maritime rescue film The Rescue held its premiere at the Emperor Motion Pictures cinema in Beijing on Wednesday.

The film is set to release on Saturday not only in China but also in many other countries including US, the UK, Canada, Ireland and Australia, becoming the first Chinese film to hold such a large-scale simultaneous release, according to the film's studio CMC Pictures.

The film will be released simultaneously in over 200 cities, 18 major theaters and 400 cinemas  overseas to allow Chinese audiences living abroad to feel and enjoy the atmosphere of the Spring Festival, the studio said. This breaks from the norm in which Chinese films usually only focus on first- and second-tier cities overseas.

In order to help Chinese films go abroad, the film has been dubbed in English, which will be released alongside the Chinese version. Meanwhile, the film company will launch a public benefit activity themed "Rescuing without borders" in 20 cities overseas such as London, New York, Seattle and Melbourne with the aim to help audiences understand the hardship of being a maritime rescuer.