While talking about the nature of sci-fi and its potential at the recently ended Beijing International Book Fair, celebrated Chinese science fiction author Liu Cixin touched on the future of his globally popular sci-fi trilogy The Three-Body Problem, revealing that a video game adaptation is currently in the works and most likely will release sometime after the film version hits big screens in China. 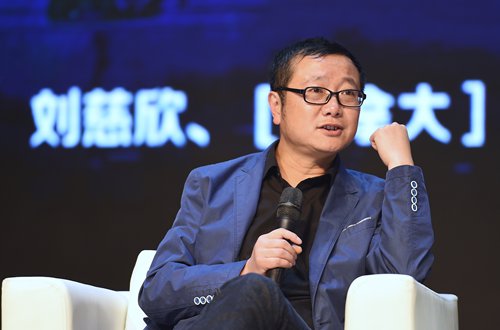 "Who are more imaginative, scientists or sci-fi novelists? I would definitely go with the former," Liu said at a forum at the fair on Wednesday.

A former engineer who worked in a factory in Shanxi Province for three decades, Liu said he defines himself as "someone who truly loves science" and that writing comes second. According to him, sci-fi is, by nature, an imaginative exploration based on real scientific facts. Liu noted that when it comes to "soft" sci-fi that focuses more on human stories than scientific theories and principles and "hard" sci-fi that puts on more weight on the beauty of scientific development itself, he prefers the latter.

"The imagination of actual scientists can be much more shocking and revolutionary than that of novelists, especially pioneering sciences such as quantum mechanics and Big Bang theory," Liu said, noting that his new work Fields of Gold, published in the short sci-fi collection book Twelve Tomorrows, is a direct reflection of this preference.

Set in 2043, the new story follows an outer-space rescue mission that lasts 19 years. Cutting-edge technology such as virtual reality, 'human hibernation' drugs, nuclear fusion spaceships, all make an appearance in the story.

Originally launched in 2011 by the celebrated MIT Technology Review, the Twelve Tomorrows series explores the future implications of emerging technologies and features a variety of stories set in real-world science, thus pursuing and advancing the tradition of "hard" sci-fi. Apart from Liu, a number of big name writers are also contributing to the latest anthology, such as Chinese-American writer Ken Liu and Clifford V. Johnson. A wide range of topics such as artificial intelligence and virtual currency are covered as well in order to explore the relationship between humanity and technology.

Strongly recommending the book to sci-fi fans at the event, Liu commented that "it concerns the most cutting-edge and discussed technologies and their impact on our future." The English version first hit bookstores in the US in late May, while the Chinese version was released in the Chinese mainland earlier this month.

However, "hard" sci-fi does not mean that storytelling is ignored. Liu stressed that the story itself is still the core of any work no matter if it's sci-fi or some other genre. Reviews of the new story seem to reflect this, as literary critics say that in the work Liu puts on more weight on story coherence than in his previous works.

Adaptations of The Three-Body Problem trilogy have long been a hot topic of discussion in China. According to reports earlier this year, Amazon was in talks with Liu with the intention to adapt The Three-Body Problem franchise into a TV series. Confirming that a movie adaptation is still in production, Liu told the Global Times that a video game adaptation is also "already in the works" and that the game is likely to see a release after the film hits cinemas sometime in 2019.

As a video game fan, Liu said he strongly believes that games are the perfect platform for sci-fi stories and that it will eventually become a new mainstream art form in China, just like poetry, music and novels.

"Nowadays each online game is a little virtual world and as the games keep developing those worlds turn into considerably massive worlds with everything we have in reality and huge numbers of people," Liu said, who went on to say that one day massive virtual universes will become "no different than the real world."

Different from traditional art forms, Liu noted that game culture is created by game developers and players together and therefore the special feature of this new art form is that each game can become a unique cultural product and story for each individual.

"We just need some key pioneers in the game industry to make it happen, just like how animation culture developed. Video games are highly likely to become a mainstream cultural art form."