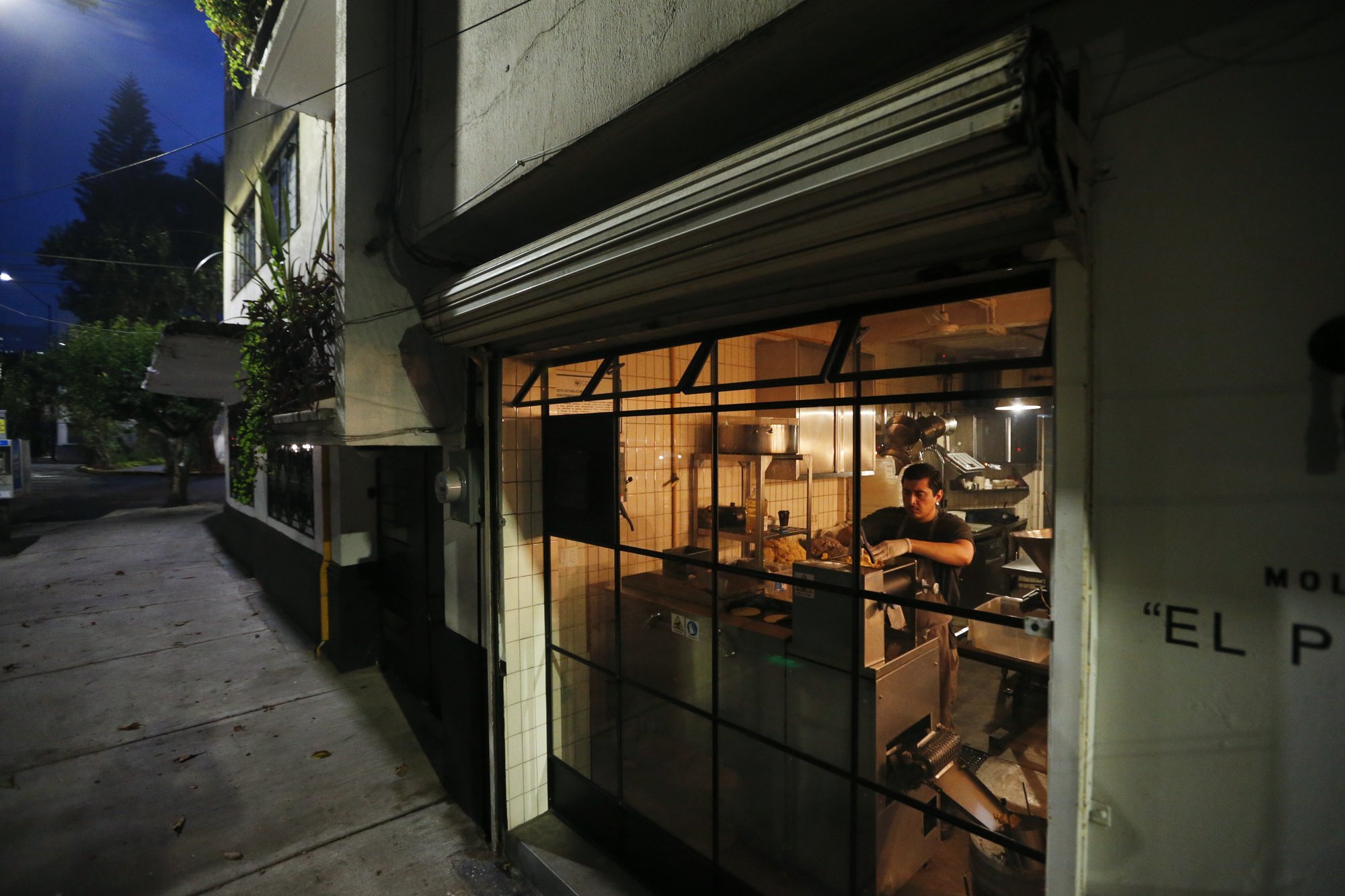 Chef Jesus Saldivar feeds ground corn through the tortilla making machine at El Pujol Mill in the Condesa neighborhood of Mexico City, April 9, 2019. The shop is part of a new tortilla movement launched by a handful of chefs, restaurants and organizations to restore and popularize authentic tortillas, made of only corn, water and lime or calcium carbonate. (Photo: AP)

As Mexico City’s 9 million residents sleep in the pre-dawn darkness, busy hands are already preparing the day’s corn tortillas in the small kitchen of Molino El Pujol, a tortilla shop that is part of a famed chef’s bid to help recover Mexico’s iconic food.

As the old tortilla machine roars to life at 5 a.m., a steaming hot mass of lime-treated corn mash is loaded into one end, where it is divided into small portions, flattened and baked. Fresh tortillas come out the other end, letting customers taste a bit of Mexican history that chefs say is being eroded by modern production techniques and modern corns.

If the “Pujol” in the shop’s name sounds familiar, it’s because its creator is chef Enrique Olvera, whose Mexico City restaurant Pujol is rated among the world’s best restaurants.

Why would the star of Mexico’s culinary world open a simple tortilla shop, or tortilleria, which conjures up images here of working class homemakers lining up for their tortillas with cloths that save them a peso on paper wrapping?

For the 43-year-old Olvera, it was a logical step, given that he had already started supporting the local farmers who supply his restaurants. His shop is part of a new tortilla movement launched by a handful of chefs, restaurants and organizations to restore and popularize authentic tortillas.

And Amado Ramírez, an agronomist who helped Olvera select the native corn varieties in the southern state of Oaxaca, often viewed as Mexico’s culinary cradle, said starting a tortilleria was also an act of nostalgia.

“For him, a tortilla shop is about recovering his past,” said Ramírez. “It was stepping back into the time when he would be sent to the street to get tortillas and bring them home for supper.”

That memory is part of the childhood of millions of Mexicans. Children would go hand-in-hand with their grandmothers to wait at the local tortilleria for the steaming hot discs of corn. Such scenes are still common in Mexico, but the practice has been eroded by the spread of pre-packaged tortillas, and many chefs say the raw materials are no longer the same.

Corn was domesticated — hybridized from the tiny ears of wild teozintle — in Mexico thousands of years ago.

Like the French baguette, the list of ingredients for a true tortilla is short: corn, water and lime or calcium carbonate. The corn is slowly cooked or soaked in the lime in process called “nixtamalization.”

Many experts say the quality of modern tortillas suffers from excessive processing and industrialization. The culprits include techniques that bypass the nixtamal process, GMO corn and the addition of preservatives.

In big cities many Mexicans have lost sight — or memory — of the taste of authentic tortillas, or the differences between the vast varieties of native corn, which vary in color, consistency and taste.

“Mexico took its corn for granted,” says Rafael Mier, director of the Tortilla Foundation, which focuses its efforts on promoting quality tortilla production and informing people of its benefits.

Historically, tortillas have been Mexico’s greatest source of energy, though wheat bread has made inroads.

Other Mexico City “authentic tortilla” shops like Maizajo and Cal y Maíz (Lime and Corn) can appear to be specialty stores catering to Mexico’s upper classes, in part because their distribution is limited to a few shops and restaurants. And they are a drop in the bucket compared to the mass production of giants like Maseca, which uses a dry corn flour tortilla recipe that differs from nixtamal.

But tortilla advocates aren’t deterred, even though the costs — and prices — are higher than Maseca, bakery giant Bimbo, or grocery chains that sell packaged tortillas as “loss leaders” to get people inside their stores.

The Alliance for Our Tortilla has published a list of 10 commandments for good tortillas, including that they be made by the nixtamal process because cooking with lime breaks down the indigestible outer layer of a corn kernel and releases nutrients.

Another factor is the use of locally sourced corn varieties: blue, red or white. Yellow corn in Mexico is generally used for animal feed.

Still, many Mexicans find the prices at places like Molino El Pujol prohibitive.

Concepción Reyes, 84, buys her tortillas at a local shop in Mexico City’s San Rafael neighborhood, and says she would never pay the 60 pesos ($3) per kilogram charged at Molino El Pujol.

Reyes says she pays 13 pesos per kilogram at her shop, and won’t pay more.

Still some people are willing to pay the higher prices — often foreigners who want to taste an “authentic” Mexican tortilla.

Molino El Pujol, where the air is scented with the doughy aroma of corn, was opened a year ago in Mexico City’s trendy Condesa district. Customers can order at a wooden counter or sit at benches.

The shop offers more than just tortillas, though everything is corn-based. There is a blackboard menu listing a dozen items, including a sweet, thick, corn-dough drink known as atole. Customers can also try the cooked corn tamales with local herbs and beans.

But, true to tradition, sometimes the tortillas are just so good that locals will shun the fancy dishes, grab the salt shaker always present at the counter of tortillerias and have a “taco de sal” — a hot tortilla with a dash of salt.