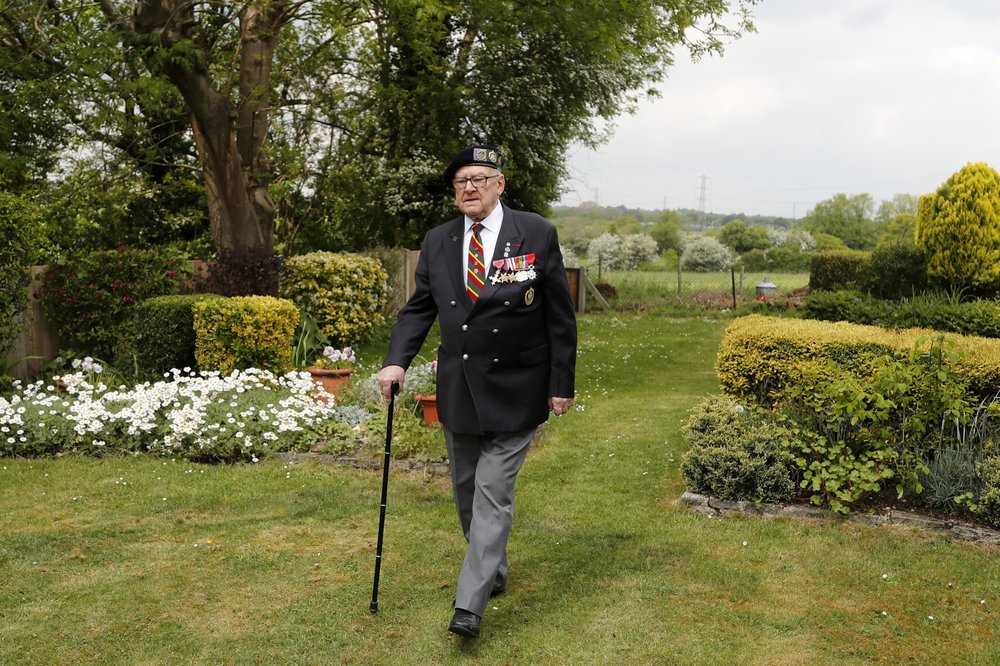 World War II veteran Ken Hay walks in his garden in London, Monday, May 4, 2020. VE-Day was the end of four days of celebration for Ken Hay. It began when the former prisoner of war got his first sight of home in almost a year from a Lancaster bomber he flew back in. (Photo: AP)

Seventy-five years after World War II ended in Europe, The Associated Press spoke to veterans who endured mortal danger, oppression and fear. As they mark Victory in Europe Day on Friday, they also are dealing with loneliness brought on by the coronavirus pandemic. Here is some of their testimony.

SURVIVING NORMANDY AND COVID-19 Tony Vaccaro is one of the few people alive who can claim to have survived the Battle of Normandy and COVID-19.

He was dealt a bad hand early, as his mother died during childbirth a few years before tuberculosis claimed his father. By age 5, he was an orphan in Italy, enduring beatings from an uncle. By World War II he was an American G.I.

Now, at age 97, he is recovering from COVID-19. He attributes his longevity to “blind luck, red wine” and determination.

“To me, the greatest thing that you can do is challenge the world,” he said. “And most of these challenges I win. That’s what keeps me going.”

Vaccaro’s grit carried him into a lifetime of photography that began as a combat infantryman when he stowed a camera and captured close to 8,000 photographs.

One of his famous images, “Kiss of Liberation,” showed a U.S. sergeant kissing a French girl at the end of Nazi occupation.

Vaccaro documented the reconstruction of Europe and returned to the U.S. where he worked for magazines such as Look and Life and has fond memories of photographing celebrities including Sophia Loren, John. F. Kennedy, Georgia O’Keefe and Pablo Picasso.

Vaccaro lives in Queens, the New York City borough ravaged by the coronavirus, and next to his family.

He might have caught the virus in April from his son or in their neighborhood, his daughter-in-law Maria said. He was in the hospital two days and spent another week recovering.

“That was it,” she said. “He’s walking around like nothing happened.”

REMEMBERING THE JOY OF HOMECOMING VE-Day was the end of four days of celebration for Ken Hay.

It began when the former prisoner of war got his first sight of home in almost a year from a Lancaster bomber he flew back in.

“I went back to get a glimpse of England and was at first disappointed to see only water, but quickly realized that I was looking backwards ... And then, rather like a medal ribbon, there was the edge of the water, a grayish-blue, the white breakers, a white cliff edge and then green grass -- there’s no color like English green,” he said.

The past 11 months had been grim. Serving in the 4th Dorset Battalion of the 43rd Wessex Division, he was separated from his brother, Bill, and captured by Germans during the invasion of Normandy. He was forced to work in a coal mine until the Nazi war machine began to unravel, and he was liberated in Germany by American troops.

After returning home to London, Hay learned Bill was stationed nearby.

On VE Day, Hay and his family listened to Winston Churchill’s broadcast, then attended a special service at church.

“We were walking back home … when I heard footsteps,” Hay said. “I turned around and there was my brother running down the road to get home, and he’d spotted us. We just threw our arms around each other. The last time I’d seen him was out in the field in Normandy.″

Both went into town in their uniforms. There were crowds everywhere, and some girls called for a kiss.

MISSING THE BIG PARTY — TWICE Mervyn Kersh likes to joke that he was probably the last British soldier to learn the Nazis had surrendered.

Pvt. Kersh, who was with forces that liberated the Bergen-Belsen concentration camp, was ordered to return to England for deployment to Japan so he was on a blacked-out train crossing Europe when the celebrations began. By the time he got to London, the party was over.

The cancellation of festivities marking the 75th anniversary of VE-Day offered fresh disappointment.

“There’s nothing going on, which is a great shame because this is the last chance those who took part in the war will have,” he said. “If you wait for another five years -- 80 years -- I don’t think many of us will be here. Not many of us are here now.”

It is also a time to remember — not just the war but its aftermath. Kersh is proud that Europe has remained largely peaceful since then, and for his role in defeating the Nazis.

‘SOMETHING HAD TO BE DONE’ Forgive British veteran Bob Sullivan for being unfussed about VE-Day.

After all, on May 8, 1945, he was lying in Cossham Hospital, having been wounded in the closing days of the fight to defeat the Nazis. As he couldn’t move because of a plaster cast on his leg, he wasn’t even able to attend a celebratory supper.

But more than that. Sullivan points out that the war wasn’t really over.

“The war in the Far East was still going on,” he said. “I had visions of fighting it out with the Japanese.’’

Sullivan is 97 now, and while proud of his service, he points out that it wasn’t just the soldiers who won the war. Everyone was involved in the defeat of Adolf Hitler.

“We just did our bit,” he said. “Everyone was in the same boat. Something had to be done.’’

Now a pensioner at the Royal Hospital Chelsea, a home for Army veterans, Sullivan has taken a philosophical view to lockdown and the downsizing of the anniversary celebrations. His movements are restricted, so something simple — like a walk in the sunshine — is more meaningful than a parade these days.

“We have a beautiful park here,” he said. “It is, to my mind, quite attractive.″