ZHENGZHOU, Jan. 4 (Xinhua) -- Archaeologists have discovered a 1,400-year-old tomb containing a white marble bed in central China's Henan Province, where elements of both Buddhism and a Persian religion have been found. 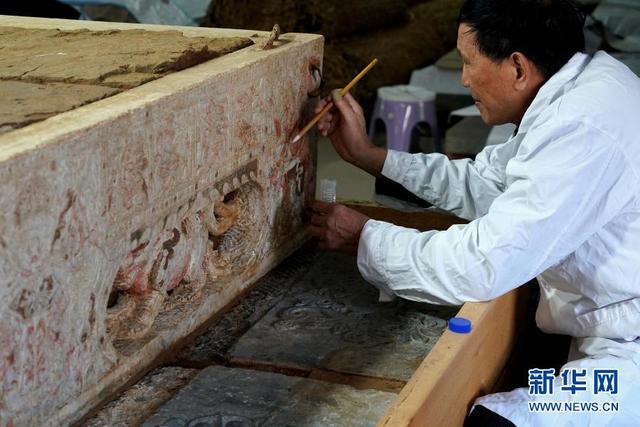 The brick tomb dating back to the Sui Dynasty (581-618) was found in Long'an District in the city of Anyang, said Jiao Peng, director of the excavation department under the city's research institute of cultural relics and archaeology.

Images of the daily lives of the tomb owners and religious stories are carved into the bed, with a religious figure on each end in the style of Zoroastrianism, an ancient Persian religion. Lotus images in the Buddhist style are also among the carvings. The bed provides material information for the study of carving techniques in the Sui Dynasty, and is of great significance to the study of the development, the shape evolution and the hierarchical use of stone beds inside tombs in China, said Jiao.

Kong Deming, head of the institute, said that a man named Qu Qing lay in the bed together with his wife.

The epitaphs reveal the couple's identity and details of their lives. The inscriptions have provided new evidence for the study of the development of Chinese characters as well as calligraphy in the Sui Dynasty, said Kong.

According to Kong, the Qu family lived in the Longxi region of what is now Gansu Province. The region was an important section of the ancient Silk Road, and was thus influenced by the cultures of Europe, western and central Asia.

"The bed and dozens of images related to Buddhism and Zoroastrianism are evidence of the exchanges between the eastern and western civilizations, which is significant for the study of ethnic and religious blending," he said.

The institute began excavating the tomb in April 2020, and more than 120 items including stoneware and earthenware have been uncovered.