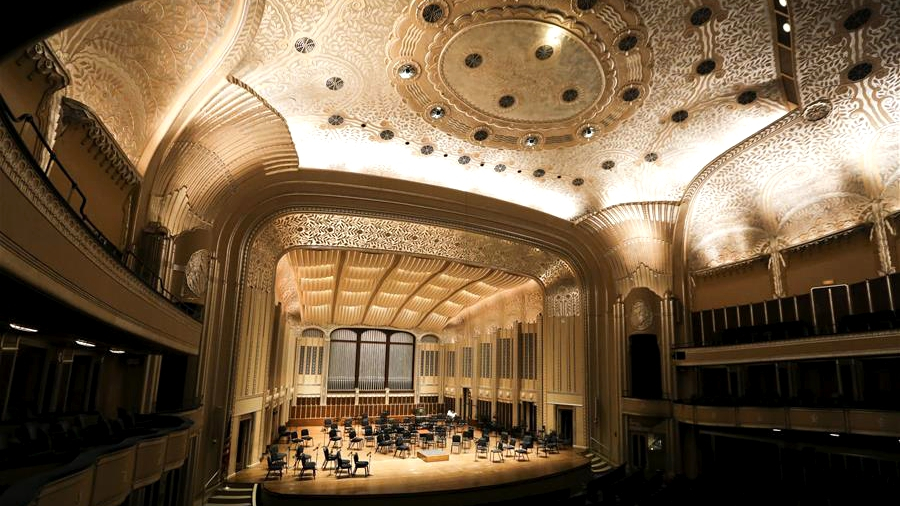 Stepping into Severance Hall, which stands at the heart of Cleveland, Ohio, one could easily be enchanted by its glittering splendor and sculptural delicacy. Hailed as one of the world's most beautiful concert halls, it is home to a matching ensemble - the Cleveland Orchestra.

Founded in 1918, the Orchestra has grown into one of the world's finest, as music critics in mainstream media, such as the New York Times and the Wall Street Journal, have declared. After concluding the 2017-18 centennial season of concerts, the Orchestra will embark on a tour to China in 2019 marking the beginning of its Second Century, 21 years after its last visit to the Asian country.

"It's been too long," said Andre Gremillet, Executive Director of the Cleveland Orchestra during an interview with Xinhua, stressing that the Orchestra will offer "a really wonderful classical, romantic repertoire for the Chinese audience."

"It's hard to be objected, right? I would say it's the best." Gremillet laughed when asked to comment on his 100-year-old team. Besides its "unparalleled virtuosity," what makes the Orchestra special is "a chamber music-like quality of the music-making. The way the (musicians of the) Orchestra listen to one another on the stage."

Though all the musicians are wonderful soloists, they understand the importance of collaboration as a team. "In this orchestra, no one is more important than the whole," he noted.

Flexibility is another quality that keeps the Orchestra vibrant and attractive to the young audience. "It can play opera as well as symphonic music. It can play Mozart as well as contemporary music," the executive director explained.

The Orchestra is also lucky to have Franz Welser-Most, a world-renowned Austrian conductor as its music director, a partnership that is entering the 17th year in the Orchestra's 101st season.

"The relationship between Welser-Most with the Orchestra is very unique, it's like a big family," said Gremillet. "They have been working together for 16 years, so they have evolved together artistically."

The "evolution" has brought the Cleveland Orchestra unprecedented residencies both at home and around the world, including a recurring biennial residency at the Musikverein concert hall in Vienna, the first of its kind by an American Orchestra. The Orchestra has also been the regular guest at the Salzburg and Lucerne Festivals, both represent the world's highest level of musicianship and artistic excellence.

Located inside Cleveland's University Circle, the Orchestra also spares no effort in its mission of classical music education and promotion. It offers Students Advantage programs which reduce the price of a regular concert ticket to as low as 15 US dollars. It also seeks Student Ambassadors annually to promote student attendance at the concerts.

The Cleveland Orchestra traveled to China for the first time in 1978 with Lorin Maazel, an American conductor famous for his intense and enigmatic style. Twenty years later, the Orchestra made its second China tour with German conductor Christoph von Dohnanyi before President Bill Clinton's official visit to China.

During the past decades, the Orchestra has collaborated with a number of Chinese musicians, such as pianist Lang Lang, who performed with the Orchestra in 2000 at the Blossom Music Festival in Cleveland and at Severance Hall in 2002. On Sept. 29, he will join the Orchestra again to perform on the Orchestra's 100th Anniversary Gala concert, which features Mozart's Piano Concerto No. 24, works by Richard and Johann Strauss, and Ravel's La Valse.

The Orchestra also currently has three Chinese-born staff musicians, who "are very excited to go back" during the Orchestra's 2019 China tour, said Gremillet.

The executive director himself is also looking forward to the tour, which will stop in Beijing, Shanghai, Shenzhen, and some other destinations to be confirmed. "I expect the Chinese audience to re-discover the Cleveland orchestra," he said. "Many people remember when the orchestra was there 21 years ago, or even remember some older recordings of the orchestra. I am not sure as many people know what the Orchestra is today. It remains remarkable, but it has evolved."

Gremillet noted that China has a growing young audience in classical music, partly owing to the trend of musical education and instrument training among Chinese kids.

"We want our music to touch as many people in the world as possible, and a lot of these people are in China, so we look forward to playing for them," he said.

"Music is the most universal language. Even though we may have different cultures and different environments, we all share this common language," he said. "Music has a way to bring everyone to get together. I think it is very important. And we view the role of the Orchestra as bring people together."