A 2-meter-long painting of a kangaroo in Western Australia's Kimberley region has been recognized as Australia's oldest intact rock painting, dating back 17,300 years. 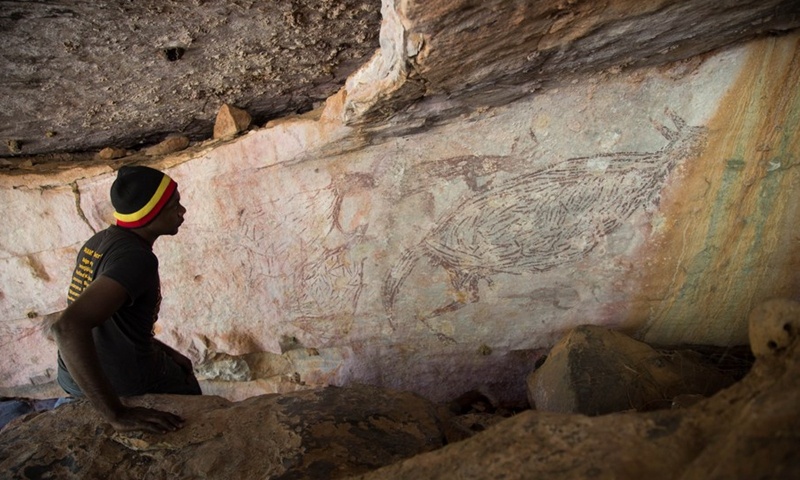 File photo taken on July 15, 2016 shows an aborigine looking at a rock painting of kangaroo in Kimberley region, Australia.(Photo: Xinhua)

Naturalistic depictions of animals are a common subject for the world's oldest dated rock art. In a paper published in Nature Human Behavior on Tuesday, a research team led by the University of Melbourne used the radiocarbon dating of 27 mud wasp nests from 16 similar paintings in Kimberley to identify the one that features kangaroo as the oldest dated in-situ rock painting so far.

First author, Damien Finch from the University of Melbourne, said it was rare to find mud wasp nests overlying and underlying a single painting, which helps to establish the minimum and maximum age for the artwork.

"We radiocarbon dated three wasp nests underlying the painting and three nests built over it to determine, confidently, that the painting is between 17,500 and 17,100 years old, most likely 17,300 years old," said Finch.

Finch said this is a significant find which provides insights into the world these ancient artists lived in, "the Naturalistic period extended back into the Last Ice Age, so the environment was cooler and drier than today."

Sven Ouzman from the University of Western Australia said the rock painting would unlock further understanding of Indigenous cultural history.

"This iconic kangaroo image is visually similar to rock paintings from islands in South East Asia dated to more than 40,000 years ago, suggesting a cultural link - and hinting at still older rock art in Australia," Ouzman said.

In the future, the researcher team plans to date further wasp nests to develop a time scale for Aboriginal rock art in the Kimberley.