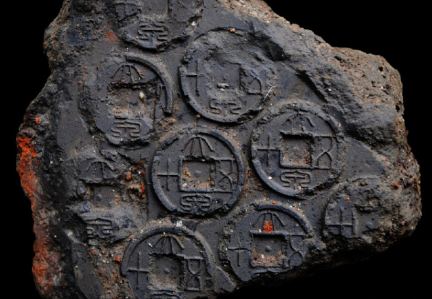 Relics of an ancient coin factory dating back over 2,000 years [Photo: Weibo account of Henan Provincial Institute of Cultural Heritage and Archaeology]

Chinese archaeologists have discovered the relics of an ancient coin factory after a heavy bout of rain caused an area of ground to collapse.

The large national mint, dating back over 2,000 years, was found at the end of 2017 in the city of Nanyang, central China's Henan Province, experts said earlier this week.

The workshop produced coin moulds as well as two kinds of coins, and could prove valuable in the study of coin-making and the economic system of the period, said Bai Yunxiang, a researcher with the Chinese Academy of Social Sciences.

"The ruins were uncovered by pouring rain," said He Yujian, head of Nanyang cultural relics bureau.

Archaeologists found fragments of pottery set as a coin mould and started the excavation accordingly.

According to Yang Jun, a research fellow with China Numismatic Society, that two inscriptions on the moulds suggest they were used during the reign of Wang Mang, who established the short-lived Xin Dynasty (45 B.C.-A.D. 23).

Wang was a powerful official in the Western Han Dynasty (202 B.C.-A.D. 8) who launched a currency reform after seizing the throne.

Detection indicates the ruins cover 100,000 square meters, while only 75 square meters have been excavated. Experts believe the excavation area should be expanded.