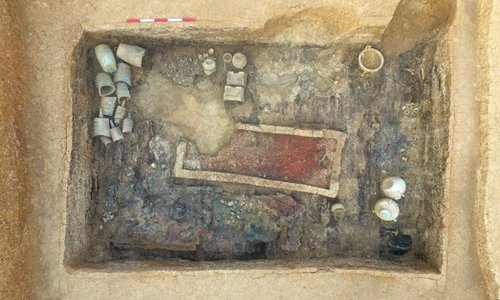 One of two unearthed ancient couple graves belonged to the nobility of the Zeng State in central China's Hubei Province. (Photo: Xinhua)

The provincial archaeology institute said the two graves were located in the Zaoshulin Graveyard in the city of Suizhou, dating back to the middle of the Spring and Autumn Period (770 B.C.-476 B.C.)

So far, a total of 54 graves and three horse pits have been unearthed since the excavation launched in October last year.

More than 1,000 bronze ware, many of which had inscriptions, have been discovered in the graveyard, said Guo Changjiang, an associate researcher of the institute.

Archaeologists found that the two couple graves had been raided before, but bronze rituals and musical instruments have been excavated from the graves.

"A set of chimes were found in a grave which belonged to a female owner. It is the only finding of this kind in Hubei. The instruments showed the high social class of the grave owner, and inscriptions noted that the female was from the Chu State," said Guo.

Fang Qin, director of the institute, said the new findings are important to study the history of the Zeng State.

So far, 13 people belonged to the high social class, and 21 emperors of the Zeng State have been confirmed through recent archaeological activities in Hubei.