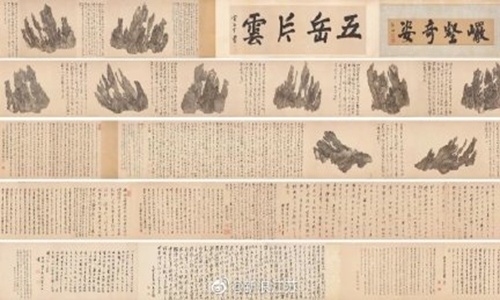 A 27-meter-long painting from China’s Ming Dynasty (1368-1644) sold at Poly Auction in Beijing on Sunday for 512.9 million yuan ($76 million), becoming the most expensive Chinese artwork sold in 2020 and the most expensive ancient painting or calligraphy work to be sold at an auction in the world.

The painting Ten Views of a Lingbi Stone was painted by Wu Bin, a painter who served at the Palace Painting Academy during the Ming Dynasty, and mainly depicted various odd-shaped stones known as lingbi. The beauty of these strange stones conveyed considerable social status during the dynasty, China’s News site The Paper reported on Monday. 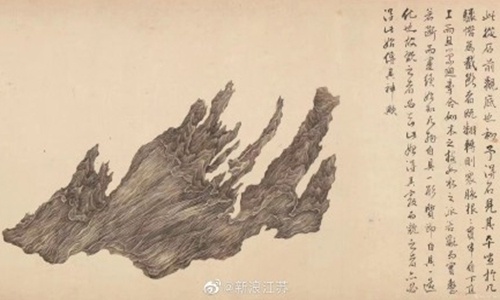 According to historical records, a well-known figure in the Ming Dynasty received a strange stone that he liked so much that he invited Wu to paint it. Wu depicted the stone from 10 different views and the figure invited a group of friends to write  prefaces and postscripts on the painting, which became known as Ten Views of a Lingbi Stone.

On Sunday night, auctioning began with 10 million yuan and finally landed on a deal of 512.9 million yuan, becoming the most expensive ancient Chinese painting in the world, The Paper reported.

Due to the outbreak of COVID-19, most global auctions have moved online. For example, Sotheby’s auctions in London and New York have all been held online, according to the official website of Sotheby’s.

However, auctions in China have not been as impacted by the outbreak, and many Chinese artworks have sold for high prices at offline auctions.

On Friday, a set of 18 manuscripts of the diary of Hu Shih, one of the leaders of China's New Culture Movement, about his life while studying abroad fetched nearly 140 million yuan in Beijing, which, according to reports, makes it the most expensive diary ever sold at auction.