XI'AN, Oct. 20 (Xinhua) -- More than 30,000 runners took part in the Xi'an International Marathon on Sunday, as it becomes one of the sporting events taking root in the ancient capital city of China's Shaanxi province. 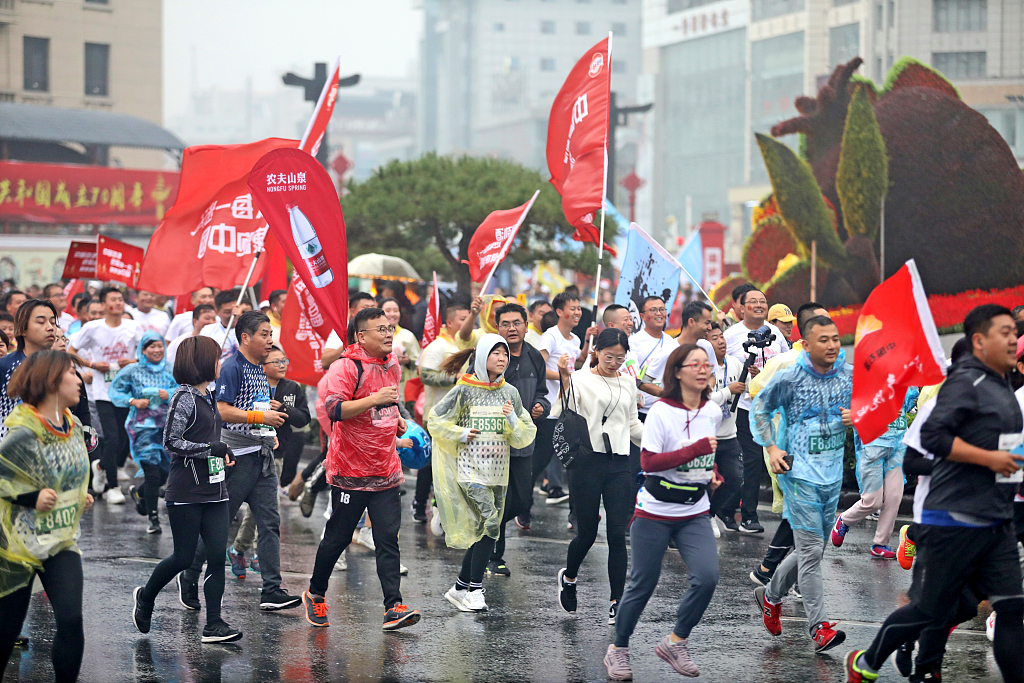 Those runners represented 30 countries and regions competing in the marathon, half marathon and a 7km race in the third edition of Xi'an International Marathon.

Including those lucky runners, a total of 122,928 people had registered on the event's official website for an annual increase of 50 percent, justifying the booming passion from the Chinese people, according to the organizers.

To be more authentic and affirmative, the Chinese Athletics Association said that a total of 1,581 marathons and races were held in the country in 2018, making an economic output of 74.6 billion Chinese yuan (about 10.86 billion U.S. dollars).

For Xi'an, home to the Terra Cotta Warriors, marathon has not only created economic values but also helped runners get to know more about the Chinese famous city.

Being the ancient Chinese capital for 13 dynasties or empires, Xi'an is rich with historic relics in and around the city, prompting the organizers to map out routes along the Bell Tower, the Tang West Market and the Big Wild Goose Pagoda, with the Daming Palace Heritage Park as the destination, which was one of the imperial palaces during the Tang dynasty (618-907 A.D).

After feasting their eyes along the route, runners can also treat themselves with local cuisine after the race. "I felt like we were on the time train travelling back to chat with our ancestors during the competition. It was a fantastic experience," said Wang Yu, a Xi'an native competitor.

"We hope more and more people will get to know our city and love our city through marathon and other races," said deputy mayor Qiang Xiaoan.

Xi'an only started to host City Wall Half Marathon since 1993, and had its inaugural international marathon in 2017 which attracted 20,000 runners from 26 countries and regions.

Since then, various marathon races become the annual activities in Xi'an. "We don't have to go to other places, we have marathons in Xi'an, such as the City Wall Marathon, International Marathon, College Town Marathon," said Sun Gang, a marathon enthusiast.

Through marathon races, the organizers have accumulated experience of holding large-scale sporting events, resulting in the upcoming hosting of the 14th Chinese National Games in Xi'an in 2021.

"More and more overseas runners get to know and love our city, and the marathons have been contributing to the development of mass sports in Xi'an," said the deputy mayor.

According to a survey conducted by the municipal government, running is one of the most popular sports in Xi'an in 2018.

"Running becomes an important life style for our Chinese people," said runner Wang. "It makes Xi'an fashionable and vigorous, and becomes another name card of the city."