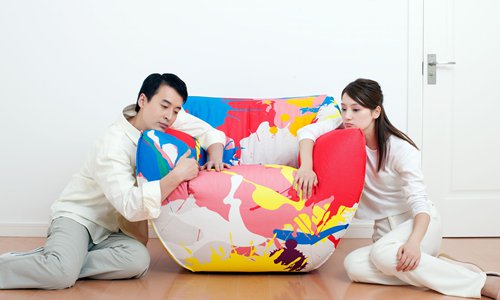 Hampered by finances, some Beijing residents are choosing to live under the same roof after divorce. (Photo: IC)

China plans to introduce a 30-day cooling-off period for couples who apply for divorce, according to a new draft of the marriage and family section of the civil code.The new draft was introduced amid soaring divorce rates in China in the past decade.  A partner could withdraw the divorce application 30 days within applying to the local civil affairs department. For couples who did not go to the civil affairs department to get their divorce certificates 30 days after they submitted the divorce application, their application shall be considered withdrawn, the draft said. The draft was submitted Tuesday to the ongoing bi-monthly session of the National People's Congress Standing Committee for a second reading. The legislative session will run from Tuesday to Saturday.Figures from the Ministry of Civil Affairs show that the number of divorces has been soaring in China in the past 16 years, from just over one million in 2002 to more than 4 million in 2017.

Qi Lianfeng, a divorce lawyer at the Beijing Minghang Law Firm, told the Global Times that a cooling-off period could to some extent reduce hasty divorce decisions and save marriages, and couples could use the 30 days to seek marriage or psychological counseling. Courts in several provinces, including Sichuan, Fujian and Shandong,   introduced a three-month cooling-off period to try to save the marriages in 2017. But Qi said a cooling-off period may not work for couples that have long been in dispute, suffering from domestic violence or other serious conflicts. There should be more specific conditions for the cooling-off period, as some people may abuse it in battling over family properties, Zhang Yuxia, a lawyer at Shanghai Shenhao Law Firm, told the chinanews.com. The draft also clarifies issues concerning a couple's joint debts and the visitation rights of grandparents.During marriage, debts jointly incurred by a husband and wife, contracted by one spouse but ratified subsequently by the other, or paid by either spouse for family necessities shall become joint debts. Debts incurred by one spouse for use beyond the scope of family necessities are not considered joint debts, unless the creditor can prove the debt was used for the family or business by the couple or incurred with mutual consent, according to the draft.Grandparents who have fulfilled their obligations to grandchildren, or if one parent of the grandchildren has died, have visitation rights, the draft explained.Qi said he has dealt with those issues mentioned in the draft. He said many grandparents want to visit their grandchildren after a divorce, but their visitation rights would not be considered in the current practice. In China, many children are raised by their grandparents as their parents focus on their careers. About 60 to 70 percent of the children under 2-and-a-half years old are raised by grandparents, according to data provided by the China Research Center on Ageing.