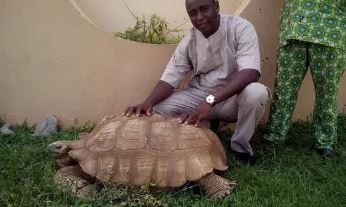 ABUJA, Oct. 5 (Xinhua) -- "Our Elder has gone to rest. We shall miss Alagba, the elder, who showed us the way for centuries and guided us all the way," wrote Ademola Ayandunni, in a eulogy written Friday on Facebook.

"Thank you for showing us the path to follow, for welcoming us home always, and for never misleading our forebears. Adieu!" Ayandunni wrote in conclusion.

And many more eulogies like this have been written since the passing of a 344-year-old tortoise, arguably the oldest in Africa, on Thursday.

In Nigeria, tourism had never been complete in the southwestern state of Oyo without a visit to the palace of Soun, the traditional ruler of Ogbomoso, an ancient town in the state. Upon arrival at the palace, an ancient male land tortoise was always on hand to receive tourists or visitors.

It was a sacrilege to call this particular reptile a mere tortoise in Ogbomoso, as the locals and tourists had superstitiously thought it was older than everyone in the town. Every dweller and visitors or tourists alike called it 'Alagba', loosely translated as "the Elder" in the local Yoruba language commonly spoken in Nigeria's southwest region.

Usually seen lumbering about in the palace, the guesstimate about its true age relied heavily on oral history. Its age as of the time of its death after a brief illness on Thursday was arrived at by situating it with the period of the traditional ruler of the Ogbomoso town, who reigned then.

The news of the death of the 344-year-old tortoise, which permanently resided in the traditional ruler of Ogbomoso's palace, had broken the heart of many who encountered it while alive. The death was widely reported by local media, most of them giving it a cover-page prominence and television reports at primetime news hours.

The tortoise attracted several visitors both from Nigeria and abroad to the palace. It was highly revered and loved by many.

"Alagba was everyone's friend," said Ayandunni who had many memorable encounters with the dead tortoise. "It had a special liking for every indigene of the Ogbomoso town. Once Alagba sighted you, it used body language, scent, and sound to show the indigenes of Ogbomoso some sort of love and affection."

The tortoise was absurdly given the treatment of a very likable creature. It had two staff members of the palace, dedicated to it. They provided food, healthcare support, and other logistics, so as to make sure it got the best treatment.

"Alagba was more like an oracle in the palace; it was believed to have divine powers for which the locals consulted it. Alagba's story was legendary," said Olufemi Ayanbowale, a tourist who saw the tortoise five times before its death. "My experiences with Alagba were very interesting."

Toyin Ajamu, the private secretary of the Ogbomoso palace, while breaking the news of the tortoise, said it will be sorely missed.

"Alagba lived in the palace for centuries. It was the oldest tortoise in Africa. The tortoise played host to many monarchs in Ogbomoso in the past.

"Alagba became popular because Oba Oladunni Oyewumi, the current Soun of Ogbomosoland, used his personal resources to cater for its well-being," Ajamu said.

According to him, oftentimes, the Kabiyesi (king of Ogbomoso) shared great moments with Alagba.

"On a daily basis, Alagba, had tourists visiting it from different parts of the world," the palace's scribe further noted.

The local Nigerian town said it plans to preserve the body of Alagba, the tortoise, for historical records.

"And many generations shall hear and know about the tortoise which gave directions to humans," added Olabimpe Akintola, who said she had very fond memories of Alagba.