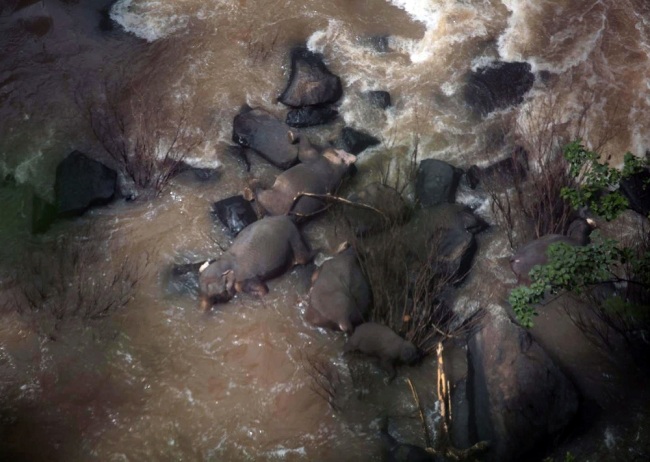 A handout photo made available on October 05, 2019 by the Department of National Parks, Wildlife and Plant Conservation (DNP) shows some of the elephants that died in Haew Narok Waterfall in Khao Yai National Park, Prachin Buri Province, Thailand, October 05, 2019. (Photo: IC)

The Thai Department of National Parks, Wildlife and Plant Conservation announced on Tuesday that park officials found another five dead elephants, bringing the number of elephant deaths to 11.

The five dead elephants were spotted by drones deployed by park officials to track the animals.

"Like the six elephants which slipped and fell into the Haew Narok waterfall ravine last weekend, the five elephants found dead today also apparently died after falling from the steep waterfall," said Sompote Maneerat, spokesman for the Department of National Parks, Wildlife and Plant Conservation. "The dead elephants were found scattered in the ravine, just one kilometer from where the six elephants killed in the accident."

Sompote said that park officials believe all the dead pachyderms were from the same herd.

A group of park officials will be using strong nets on Tuesday to prevent the dead elephants from being washed downstream by strong currents.

The nets must be strong enough to withstand weight of up to 40 tons, which is the average weight of an adult elephant, said Sompote.

The Haew Narok waterfall has been closed to visitors indefinitely as officials are trying to repair damaged barricades to prevent elephants from venturing too close to the steep and slippery cliff.