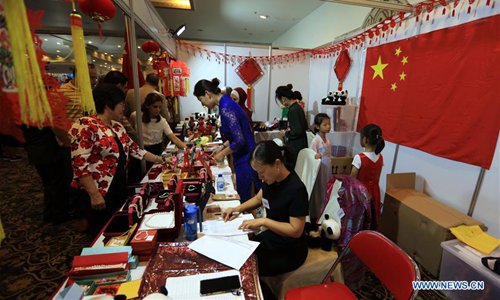 Various products are on display at the China pavilion during the 55th Diplomatic Bazaar in Amman, Jordan, October 5, 2019. Dozens of embassies participated in the event Saturday, celebrating cultural diversity and supporting Mabarrat Um Al Hussein, a shelter for orphaned and underprivileged boys. (Photo: Xinhua)

Scores of embassies in Jordan took part Saturday in the 55th Annual International Diplomatic Bazaar, which was inaugurated by Princess Basma at Al-Hussein Youth City in Amman.

The proceedings of the bazaar, which is held annually where embassies gather to sell products that reflect their culture and local cuisines, go to benefit the children of Mabarrat Um Al Hussein, which provides education and shelter for Jordanian boys coming from troubled homes.

In a speech at the opening of the bazaar, the Princess said holding the even for the 55th time highlights the genuine willingness to support the youth of Mabarrat Um Al Hussein.

Commodities including several products, handicrafts and food from more than 50 countries, were on display during the activity.

At the Chinese booth, several items including Chinese tea and panda toys, were on display.

Mabarrat Um Al Hussein is a home for young boys aged from 6 to 18, who come from challenging backgrounds, according to a statement from Princess Basma's office.

The Mabarrat strives to be a centre of excellence for youth and a model institution for children in care, in the local community, the statement said.