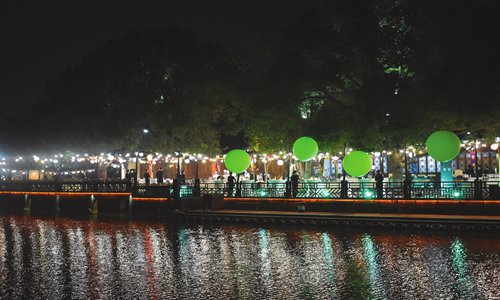 Dramas, art exhibitions, poems, delicious food, many of the pleasant enjoyments in life, were enjoyed by visitors during the 7th Wuzhen Theater Festival in East China's Zhejiang Province, which ran from October 25 to Sunday.

The festival used its own unique style and rich content to attract hundreds of thousands of visitors and performers to the charming water town.

The theme of the festival this year was "emerge," representing an outburst of creativity and expression. Additionally, the theme was also meant to set the stage for the Emerging Theatre Artists Competition (ETAC), a competition among young students from all over the world and a new highlight of the festival.

For the competition, participators needed to give a short performance using three key words: "invisible person, key, and the plane ticket." After nearly a month of intense review, the jury finally selected 18 groups of finalists, who went on to perform 60 times during the 10-day-long festival. In the end, the drama Rabbits and Chickens, whose two actors are postgraduate students at China's Central Academy of Drama, earned the award for best drama.

"We festival founders decided to invite some drama groups from different schools and universities both in China and abroad to perform at the festival because we think education and young people are very important," Stan Lai, one of the founders of Wuzhen Theater Festival and an award-winning playwright and theater director, said during a Q&A session with media on Sunday. He noted that the festival provides an opportunity for students majoring in art to learn from and communicate with each other so they may derive some inspiration through cultural exchange.

"I now feel that the younger generation of artists is emerging. They will be a shining star in the hearts of people in the next era," actor Huang Lei, another of the festival's founders, said in an interview with the Global Times.

Looking back at the 10-day drama feast, 28 unique plays from all over the world were performed a total of 141 times.

Highlights from the overseas performances include two Greek plays that took place on an outdoor stage surrounded by water - a first for the festival. The water added to the beauty of the performances, with the classical tragedy of The Trojan Womentaking place under the afterglow of the sunset and the dreamlike The Fairy Queen taking place during a dark autumn night that presented the beauty of nature to the audience.

Another unique offering was the Chinese drama From Morn to Midnight, which was performed from 1:30 am to 6:20 am. The show was tailor-made for the festival by Chinese director Chen Minghao. Gathering together to enjoy the beauty of art, the performers and audience wait for the first rays of sunshine in the morning.

Chinese drama Where Do We Come From, What Are We, Where Are We Going 2.0 subverted the traditional drama experience by turning it into audio instead of a visual experience as only the actors' voices could be heard coming from the stage. Another interesting twist is that the performance only accommodated four audience members at a time.

Lai noted that the organizers did not set a specific ratio for the number of Chinese and foreign dramas at the festival. Instead, they saw themselves more as chefs who pay more attention to matching different dishes together to make an incredible meal.

"At the Wuzhen Theater Festival, you can just daydream along the river and enjoy whatever lifestyle you want," said Lai.

Looking back on the past, the Wuzhen festival has been growing at a rapid speed. According to Lai, their original idea was a pure and simple dream, making good plays.

"It was very tough at the beginning because the foreign drama troupes did not know where Wuzhen was and construction on our theaters hadn't finished yet. We have all been very surprised by the rapid growth of the festival. Many drama groups now show interest in performing in Wuzhen and they are all very excellent troupes."

Despite this success, the Wuzhen Theater Festival seems to also be facing a seven-year itch.

"Seven is a very lucky number and I take it as a preparation period because we still have a lot of things that we need to try and improve," the Beijing Youth Daily quoted Meng Jinghui, another festival founder, as saying.

"Although tickets sold out at a shocking speed this year, reflecting the popularity of the festival, I am not happy with that because the ideal situation for me is that everyone can get a ticket at a reasonable price and be able to watch the shows they love," Lai said.

Lai noted that the festival has been working hard to increase capacity, pointing out that the theater where the Danish drama The Tree was performed originally could only hold 40 people, but was later enlarged to 100. But even then, there were still those who were not able to get a ticket.

Lai also pointed out that while any scenic spot can host a festival, how to keep pace with the times, how to attract more people and theater companies to Wuzhen is something they need to consider.

"The Wuzhen Theater Festival has opened a window between China and the world. Both sides can learn and communicate through this window. We hope intercultural communication in the field of stage plays can be increased and more original domestic stage place can be produced and performed at our festival," Lai said.