Universal Beijing Resort celebrated its first anniversary since its Grand Opening on Sept. 20, while 90% of surveyed guests said they were satisfied with the resort during the past year. 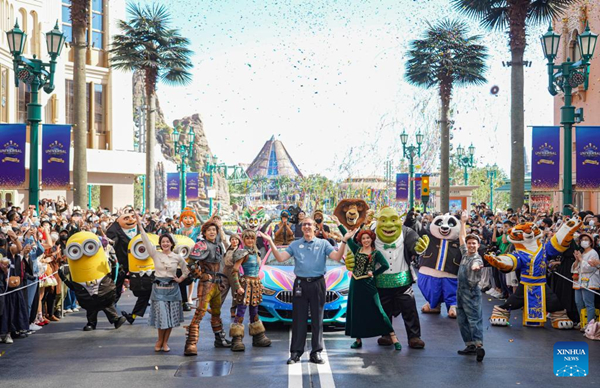 Photo taken on Sept. 20, 2022 shows the first-anniversary celebration at the Universal Beijing Resort in Beijing, the capital of China. [Photo：Xinhua]

"Over the past year, Universal Beijing Resort has created amazing stories with our guests," said Joe Hoskin, executive vice president & general manager of Universal Beijing Resort, at the one-year ceremony on the anniversary day. On Tuesday morning, the spectacular ceremony was held at the resort's Hollywood land with the theme song "This Is Universal" playing in the background. Fourteen classic movie characters and 62 dancers later put on an exciting performance. There are also other anniversary festivities, decorations and the release of a limited-edition anniversary cup to join the celebration.

Since its opening on Sept. 20, 2021, Universal Beijing Resort has been regarded as a new cultural tourism landmark of Beijing, being the place "Where Movies Come to Life." On June 25 this year, Universal Beijing Resort resumed its operations after temporary park closure for nearly two months due to the COVID-19 pandemic. The reopening was followed by its first summer peak, restoring confidence in the recovery of the cultural tourism industry. The pandemic affected the first year of the resort's operations. Sometimes, due to COVID-19 resurgences and travel restrictions, many tourists from other parts of China, especially from other countries, still have no chance to experience their long-anticipated resort. But in other words, the resort still has excellent potential.

The resort management released plenty of interesting statistics on the anniversary. During the past year, with only 10 months of operations, 90% of surveyed guests said they were "very satisfied" or "satisfied" with the resort experience. Meanwhile, the park's shows and performances, rides and attractions, environment and infrastructure, and digital products and experience received the most praise.

In the past year, Universal Beijing Resort launched various new experiences, including the Winter Holiday, Universal's Chinese New Year, Universal Studios Beijing: Honor of Kings Heroes LIVE, Jurassic World Isla Nublar Dinosaur Exhibition and the launch of Minion-themed rooms at The Universal Studios Grand Hotel. Seeing real snow on the land during winter became one of the most popular experiences in Beijing. Data showed that "Harry Potter and the Forbidden Journey," "Jurassic World Adventure," and "Despicable Me Minion Mayhem" are the most popular rides. 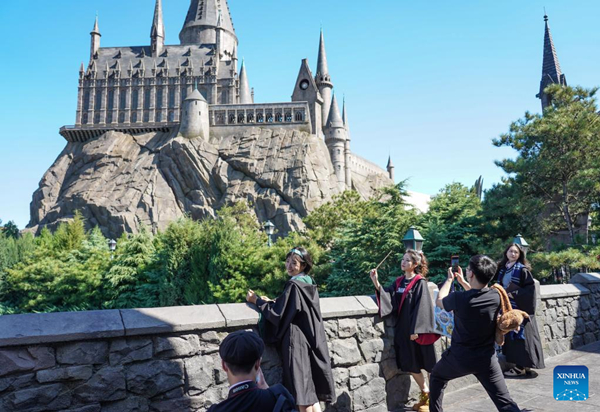 Other statistics are also stunning: 90% of guests said they would like to revisit Universal Beijing Resort, while guests with the leisure passes visited the park more than 17 times on average. Since the opening, over 13.8 million visitors in total watched more than 68,000 shows and performances, equivalent to 14,000 hours. Visitors drank over 1 million cups of Butterbeer, enjoyed 1 million Minion ice creams in Universal Studios Beijing and more than 100,000 hand-crafted milkshakes at Universal CityWalk – The Toothsome Chocolate Emporium & Savory Feast Kitchen. And the resort launched more than 3,400 merchandise items in total.

In addition, since its opening, more than 85,000 guests have celebrated their birthdays at Universal Beijing Resort. Many couples made marriage proposals at the resort. More than 80% of guests visited the resort in groups. People of all ages had fun at the resort, with the oldest guests being two 96-year-old grandmothers, according to the resort.

The resort also boasted its green development. For example, more and more guests embraced technology-empowered park experiences. Guests used "Photo Validation" more than 25 million times to access multiple in-park services, saving enough paper to plant 2,000 trees. Around half of the guests used Universal Beijing Resort's official app and mini-programs to check maps and navigation. Even during the temporary park closure due to the pandemic, guests "visited the resort online" more than 11 million times by checking the resort's official app.

Meanwhile, Universal Beijing Resort became the world's first theme park resort destination to achieve LEED Gold certification, realizing the philosophy of sustainable development. There are more than 600 species of plants and 387 species of animals living at the resort. In the past year, the resort reclaimed 2.13 million cubic meters of water, which could almost fill up the entire Kunming Lake at the Summer Palace in Beijing. The reclaimed water was used for vegetation irrigation, waterscape filling and more.

"We've seen rising demand from Chinese consumers for high-quality and immersive entertainment experiences – just like the kind we create for our guests, which greatly increased our confidence in the future of Universal Beijing Resort. We will continue to bring more high-quality themed experiences and seasonal events to our guests and create the extraordinary dream vacation destination," Hoskin said.