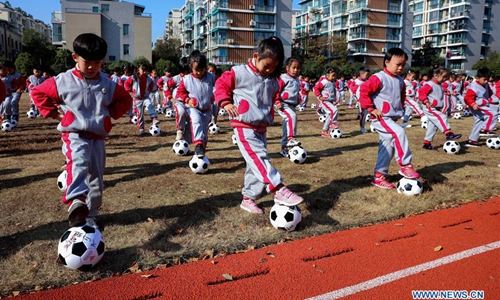 Students perform with footballs during a football themed activity at a kindergarten in Changxing County of east China's Zhejiang Province, Dec. 9, 2019. (Photo: Xinhua)

About 90 percent of the parents of primary and middle school students in China believe it is natural for teachers to punish students who have made mistakes, according to a survey released Thursday by China Youth Daily.

Over 70 percent of the 2,005 respondents, 78.1 percent of whom are parents of primary and middle school students, said if teachers do not dare to punish their students, it will not be good for the students because their misconduct will not be corrected in time.

About 72.9 percent of the parents surveyed said it is common that teachers in China do not dare to punish their students nowadays because parents tend to be protective and there are also trust issues.

The difficulty in defining appropriate punishments to prevent physical punishments is another factor that makes the whole matter complicated, said Yang Xiong, director of the youth research institute under the Shanghai Academy of Social Sciences.

About 30 percent of the respondents live in first-tier cities in China and around 40 percent live in second-tier cities, according to the report. Those living in county-level cities, towns or rural areas account for about 30 percent.

The regulation, which is still in the phase of soliciting public opinions, lists punishments available to teachers in three categories based on the level of severity of the offense, including naming and shaming, forced standing that lasts no longer than one class session, and suspension of class for no longer than one week.