CULTURE A conundrum for New Yorkers: Social distancing in the subway

A conundrum for New Yorkers: Social distancing in the subway 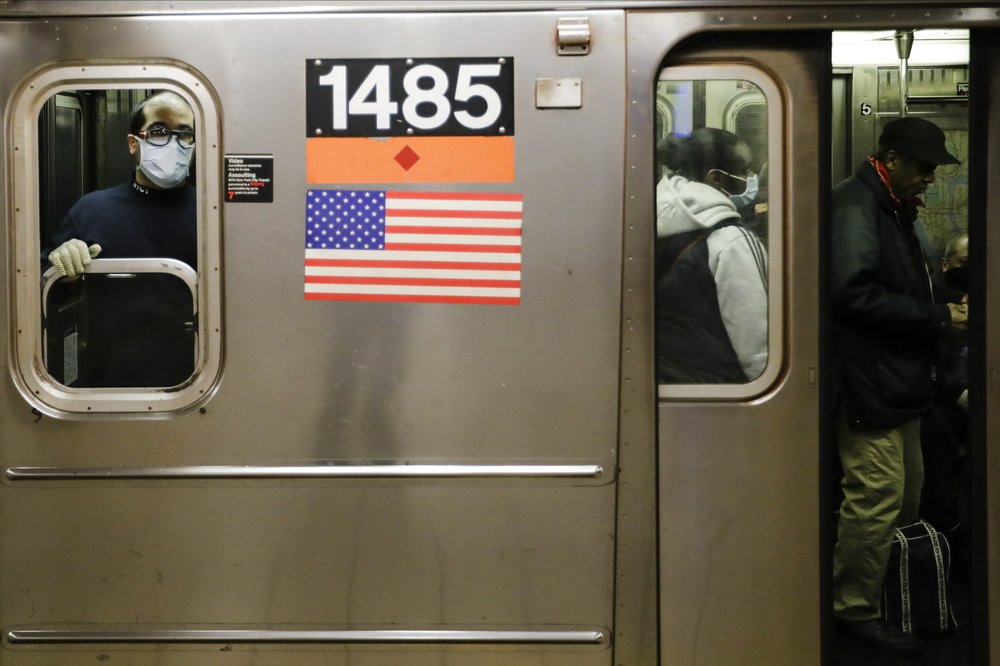 They let trains that look too crowded pass by. If they decide to board, they search for emptier cars to ride in. Then they size up fellow passengers before picking the safest spot they can find to sit or stand for commutes sometimes lasting an hour or more.

This quiet calculus is being performed daily by people who must keep working during the coronavirus pandemic and say the social distancing required is nearly impossible to practice in the enclosed spaces of New York City’s public transit system.

The Centers for Disease Control and Prevention says that people should stay 6 feet (2 meters) apart. But even though ridership has plummeted in the city, making jam-packed trains and buses the exception rather than the rule, passengers aren’t always guaranteed even 6 inches (15 centimeters).

“Everybody is very scared,” Shaderra Armstead, a health care clinic receptionist who rides the subway to work, said this week. ”They’re trying to keep their distance from each other, but it’s impossible.”

“It makes me not want to go on the train at all,” she said. “I’m nervous every day, but I still have to go.”

Riders on some trains in Brooklyn and Queens this week sat or stood in some cars within a few feet of one another, some with their faces uncovered, while keeping their distance from homeless people camped out. At the same time, there are images showing subway platforms mostly empty at times they’d typically be crowded.

Transit officials say they’re working harder than ever to protect passengers and their own workers amid a pandemic that has killed more than 7,000 New Yorkers in just a few weeks, mostly in the city and its suburbs. Several suburban counties in New Jersey and Connecticut have also registered significant numbers of deaths.

The virus has also taken the lives of 41 employees of the Metropolitan Transportation Authority, which runs the city’s buses and subway as well as many commuter trains. For most people, the new coronavirus causes mild or moderate symptoms, but, for some, especially older adults and people with existing health problems, it can cause more severe illness and lead to death.

“We want as little social density and as much social distance as we can get,” MTA Chairman Patrick Foye said in a radio interview Tuesday.

Foye, who also got the virus but is doing fine, called scenes of crowding on trains “episodic” and said safety measures are working well enough that complaints by riders about overcrowding have dried up in recent days.

Mayor Bill de Blasio said Friday on WNYC radio that he doesn’t think the issue has been resolved.

“I don’t understand how he can say that when I have, all through the week, heard these reports,” the Democrat said.

He said he will ask Foye whether trains can run more frequently or be supplemented with buses. The mayor said he has been sending police officers to particularly crowded stations to space people out and tell them not to get on crowded trains.

Foye said in an email that the MTA “is aggressively monitoring any reported crowding issues” and has deployed police officers to assist in those efforts.

The challenges aren’t unique to New York. In Philadelphia, where at least three transit workers have died from COVID-19, the Southeastern Pennsylvania Transit Authority said it will move to a “lifeline” service Thursday, closing some stations and limiting rail and bus service to core routes.

In London, where ridership is down as much as 93% from the same point last year, images posted on social media have shown some trains crowded at rush hour since fewer are running because of staff illnesses. Fourteen London transport staff have died from the virus, including eight bus drivers.

In New York, too, use of all forms of mass transit has plummeted.

Ridership on the subways Monday was down 92% compared to a normal weekday. The commuter rail lines serving Long Island had 97% fewer passengers. On Metro-North, which serves the city’s northern suburbs, including those in Connecticut, ridership was down 95%. On MTA buses, it is down more than 60%.

The agency has cut back bus service by about 25%, reduced the number of trains running on weekdays on the Long Island Rail Road from around 740 to around 500 and on Metro-North from 713 to 424.

While subways and buses are all far less crowded than normal, there are still moments that are too close for comfort in the age of coronavirus.

Waiting for a Manhattan-bound train on the Queens platform, Ebrahima Sumareh said he searches for the least crowded subway car he can find before boarding.

He’s also worried some of his fellow riders might not be following the distancing protocols in their lives, not just on the trains, he said. “New Yorkers, we don’t listen.”

To keep trains from getting too crowded, New York’s MTA says it has sought to keep up normal service on the most-used routes. There are also police directing people on subway platforms to less crowded sections of trains. Riders are urged to cover their faces and to report situations where social distancing isn’t being observed.

The agency has posted signs on some trains that read: “Essential Worker, yes, ok to ride. … No — why are you even reading this? Go home.”

The MTA has sought to help protect employees by distributing 300,000 medical grade masks, 160,000 surgical masks, and 2.5 million pairs of gloves to its employees since March 1, Foye said.

Queens subway rider Bhargav Munagala said Tuesday that during his commute to his job as a project manager for a food packing and delivery service, he tries “to give respect to the very important people” like nurses.

“Most of the people I look at now are tired,” while others act “crazy,” he added. “That’s New York.”