CULTURE A decade in the making, Louvre Abu Dhabi opens to the public

A decade in the making, Louvre Abu Dhabi opens to the public 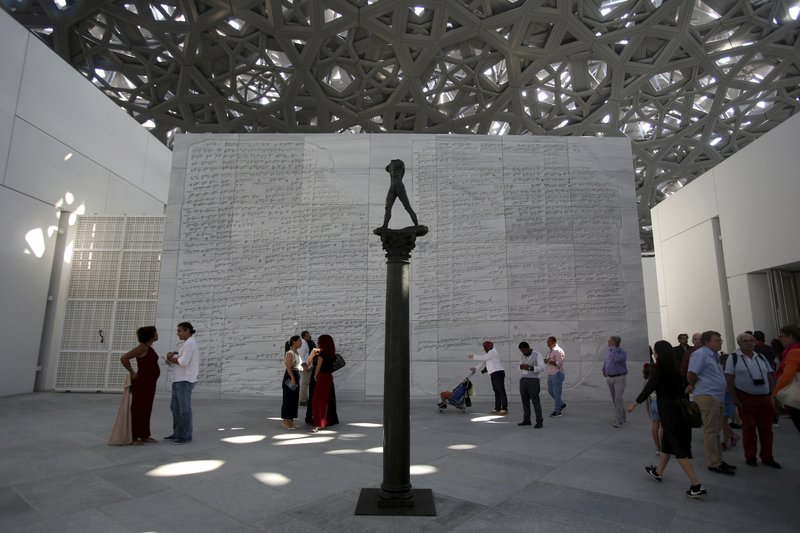 Thousands of curious onlookers walked through the galleries of the Louvre Abu Dhabi as it opened to the public for the first time Saturday, ending a decade-long wait for a project plagued by questions over laborers’ conditions.

Online tickets sold out and hundreds more stood in line Saturday morning for the chance to see the works of the likes of Pablo Picasso and Rodin.

The modernist museum, designed by French architect Jean Nouvel, sits under a honeycombed dome of eight layers of Arab-style geometric shapes. It draws the lapping waters of the Persian Gulf into its outer corridors. At night, light inside pours out of its saltshaker-like dome.

“This museum actually goes beyond expectations because the museum is an icon in itself and ... under its beautiful roof it has so many nice pieces of art which brings the whole world together,” said Michaela Stolz-Schmitz, who lives in Dubai.

“We’ve seen it on the internet so we sort of have an idea what it is, what it looks like but getting here and really being here and seeing all of this, I’m in awe,” Bayhon said. “It’s like, ‘Oh wow.’ I tried to capture it on my phone but I just couldn’t.”

“After an exciting period of preparation, the opening is a truly special moment,” Rabate said in a statement. “Today, this building becomes a museum.”

Envisioned by France’s then-President Jacques Chirac as a means to fight extremism with art after the Sept. 11 attacks, the Louvre Abu Dhabi is intended to be a bridge between East and West, with Buddhist, Christian, Islamic and Jewish artifacts.

However, the conservative mores of Abu Dhabi, the UAE capital that’s more buttoned-up than freewheeling Dubai, can be seen in the relative absence of pieces depicting nudity.

Authorities have not said how much it costs to build the museum. However, Abu Dhabi agreed to pay France $525 million for the use of the “Louvre” name for the next 30 years and six months, plus another $750 million to hire French managers to oversee the 300 loaned works of art. A center at Paris’ Louvre now bears the name of the late UAE President Sheikh Zayed bin Sultan Al Nahyan, which was also part of the deal.

During construction, the project faced intense criticism over labor conditions, as workers toiled for long hours in the brutal heat for low pay. A worker was killed in an accident in 2015, while another died of “natural causes” in 2016, according to Abu Dhabi authorities.

Hundreds working on projects on the island, including the Louvre, were deported or lost their work visas for launching strikes over their conditions, according to a 2015 Human Rights Watch report. Labor strikes are illegal in the UAE.

Today, much of Saadiyat Island, envisioned as a cultural district anchored by the museum, is still empty. A planned Middle East outpost of the Guggenheim remains unbuilt, with just a poured foundation on the salt flood plain.

On Saturday though, visitors simply appeared awed to visit.

“I wanted to experience it for real, rather than just looking in the TV or in pictures,” visitor Juliet Bayhon said.