CULTURE A delicate thread from history

A delicate thread from history 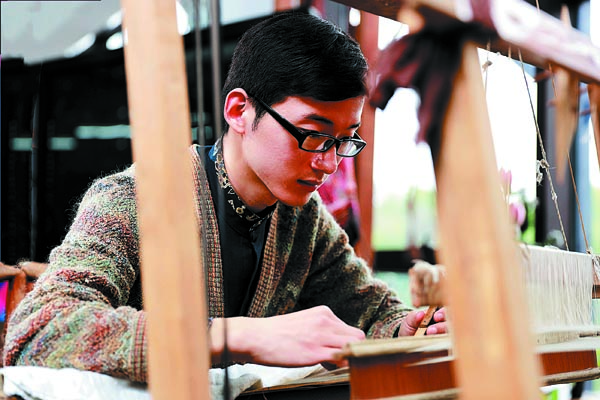 Ancient silk tapestry technique comes back to life at the hands of a determined weaver, Yang Feiyue reports.

Hao Naiqiang is living like a recluse at the foot of a mountain in the countryside near Taihu Lake, of Suzhou city, East China's Jiangsu province.

"It's away from the hustle and bustle of the outside world, better for me to concentrate the mind and explore kesi," says the 32-year-old, originally from North China's Hebei province.

Kesi is silk tapestry with pictorial designs. Its Chinese designation means "cut silk" and it derives from the visual illusion of cutting thread, even some kind of effect of engraved relief, that is created by distinct, unblended areas of color.

It is one of the very few weaving techniques that cannot be mechanized, and was added to UNESCO's list of Intangible Cultural Heritage in 2009.

Hao was drawn to kesi in his sophomore year when his professor at Soochow University arranged for his class to tour a private workshop.

He was mesmerized by how a delicate kesi product could come out of a rough "machine"－a tapestry loom that looked just like a pile of logs.

"It was exquisite, just like an engraving," Hao says. "You have to see how the shuttle constantly shifts horizontally and vertically and watch the kesi work come out of the loom to believe it."