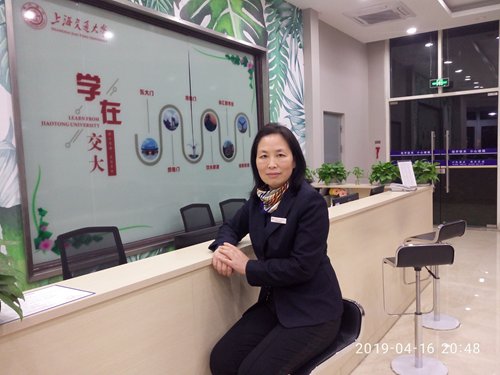 The successful story of "mother and son enter university hand in hand" attracted media all over China. The Global Times asked Yuan, "How do you feel about being an internet celebrity with so many interviews putting you in the limelight?" Without any hesitation, she replied, "I don't think of myself as a celebrity. I still live a peaceful and normal life just as before."

Born in 1970 in Central China's Henan Province, Yuan graduated from a normal school where she majored in biology in 1991. She became a biology teacher at a local middle school from 1991 to 1992.

"At that time, biology was too insignificant compared to Chinese, mathematics and English. I was unhappy to be an 'insignificant' teacher. So when I got the chance to work as a bank clerk, I chose to have the 'golden rice bowl' in 1992," Yuan told the Global Times.

Yuan told the Global Times that learning helped her a lot in her 19-year career in the banking system in Henan Province before she came to Shanghai to reunite with her husband and son in 2011.

Yuan proudly said that her family is a typical studious family. Yuan's husband started from a vocational education and then worked as an electrician in Henan. He then got his bachelor's, master's and doctorate diplomas. He graduated from Shanghai Jiao Tong University in 2008 with a doctorate degree and then settled down in Shanghai. With the city's talent introduction policy, their son was able to come to Shanghai for his middle school education and became a new Shanghainese in 2009. It's not until 2011 that Yuan came to Shanghai after her early retirement from the bank she worked for.

From 2011 to 2017, Yuan became a housewife to take care of her family. She had worked for an accounting firm in 2017 in Shanghai, but found it's not suitable for her. She has been working as a foreign students' dormitory receptionist in Shanghai Jiao Tong University since 2018. The 10 am to 10 pm schedule, working every other day made it possible for her to study in Fudan University on the other side of Shanghai. "The four-hour commute between two universities is demanding, but it is worthwhile," Yuan said.

Her family knows clearly that knowledge changes fate, so her husband and son encourage and support her in her studies.

As a mother, Yuan said that she used to have conflicts and tense relations with her teenage son. Teenagers are always tired of mothers' repetition and the habit of "keeping up with the Joneses." "I was a tiger mother once, asking my son to do this and that. We couldn't get along well with each other. But things got better when I began to study with him instead of supervising him to study. When parents act as a role model, children can behave better. Both sides benefit from it," Yuan said. She added that the earlier parents guide their children on the right track, the better off they will be.

Yuan now has quite a close relationship with her son. In one message her son sent to her, it read, "Mom, you are always doing 'silly' things in my opinion. You try to find something from nothing. You try to study English and memorize vocabulary. You travel all the way to study in Fudan University. I once thought it was just for your entertainment, but it turns out to be your dream. You are Forrest Gump, always exceeding other's expectations. Congratulations on your dreams coming true. I'm happy for you."

Yuan said that she previously targeted Shanghai Jiao Tong University for her graduate program, but she failed to meet the recruitment requirements and then got an offer from Guangxi University in South China's Guangxi Zhuang Autonomous Region. "I will go to study there, although it's far away," Yuan said.

"I have a dream of being a primary school teaching volunteer to help children lay a foundation in their Chinese studies. After that, if possible, I would like to teach foreigners Chinese, thus I can help spread our profound Chinese culture to go farther in the world." Yuan admitted that English is her hardest subject to conquer in preparing for her graduate entrance examination, but in front of the Global Times camera, she can give a fluent self-introduction in English.