CULTURE A farewell to donkeys in rural China

A farewell to donkeys in rural China 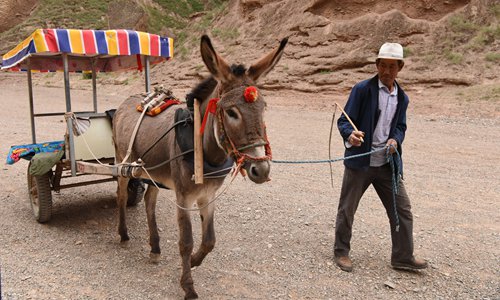 A villager leads a donkey cart at a scenic spot at Jingtai County in Baiyin City, northwest China's Gansu Province, May 29, 2019. (Photo: Xinhua)

Should he sell his donkey at a low price or bear the cost of keeping it as a "pet"? Chinese farmer Ma Hongyi is facing a dilemma.

There are fewer than 10 donkeys remaining in Dongping Village where Ma lives in north China's Shanxi Province, and all of their owners are facing the same situation.

Donkeys used to be the pillar of agricultural production in Dongping Village, home to 190-plus residents with arable land per capita of more than 30 mu (about 2 hectares).

In Ma's childhood, his family often went hungry. Yet however tight things got, they always managed to save food for their donkey; otherwise, it would have been unable to work.

"We didn't have agricultural machinery in the past. Our donkey was the backbone of our family," Ma said. "It worked all year round from plowing to carrying small loads. If it got sick, our rice yield would be reduced."

Donkeys have been gradually losing their functional appeal in modern times, especially after 2004 when the government launched an agricultural machinery purchase subsidy program to help farmers and boost the country's grain output.

Dongping is among the Chinese villages that have abandoned donkeys in agricultural production in favor of machines.

Donkey dealer Li Zhiyin said it is not easy to buy donkeys from farmers now as few still keep the animals.

China's donkey population has dropped to around 2.53 million last year from 11.8 million in 1952, official data showed.

But the number of agricultural machines and tools has increased to 200 million in 2018, while the country had fewer than 2,000 tractors in 1952.

Seven years ago, Ma purchased a tractor, a rotary cultivator and a seeding machine.

"The tractor can plow 40 mu of field each day, almost 20 times faster than a donkey," Ma said. His family also gave up using donkeys to carry things as the ubiquitous logistics service had covered Dongping Village.

"Besides the high cost of fodder and shed maintenance, the surrounding environment is not suitable to raise a donkey," Ma's wife Liang Xiurong said.

In 2016, the couple moved from a cave dwelling, or yaodong, to a new brick house. The village started developing day lily and grape growing industries in 2017. Now, it is exploring the tourism sector, investing more than 6 million yuan (around 857,000 US dollars) to improve its environment.

In Guangling County in the city of Datong, donkey raising has long been a local tradition. Now the county's donkey population has dropped to fewer than 3,000 from 17,000 at its peak.

The county government has to subsidize 500 yuan for each donkey each year, so as to encourage the breeders to expand the size of their herd.