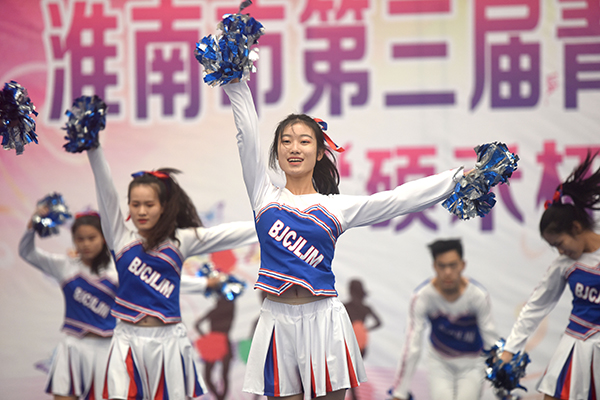 While Chinese universities are better known for their rigorous academic standards than their sporting excellence, the rising popularity of keep-fit programs is seeing increasing numbers of students take up recreational exercise.

Twenty students were selected from over 100 applicants with those who meet the course requirements receiving two extracurricular credits.

The weight-loss classes on offer included kickboxing and yoga, and the program aimed to improve several aspects of the students' fitness levels.

"I look good and hope to look much thinner," says participant Guo Kai, adding that he had lost more than 6 kilograms after enrolling on the program.

"This is the first time our university has offered such a course," says Zhang Jianbin, one of the Tianjin University program leaders.

"Losing weight is not the end, however. We hope the students can cultivate a lasting passion for sports and healthy lifestyle."

In recent years, many Chinese universities have required their students to reach a certain level of physical fitness.

Since September 2017, first-year students at Tsinghua University have to show they can swim at least 50 meters before they are eligible for graduation.

In a similar move, first-year students at Zhejiang University who wish to receive full marks in their off-class part of their compulsory PE classes are now required to run 48 times each semester, with male students obliged to run 3.5 kilometers each time, and female students 2.5 kilometers.

Measures like these are aimed at helping college students maintain and improve their physical fitness, according to Wang Zongping, a professor of physical education at Nanjing University of Science and Technology.

In an unprecedented move, Nankai University in 2017 issued certificates of physical fitness to over 1,200 graduates who exercised regularly and kept fit.

Speaking about universities' focus on fitness, Wang says: "Those prestigious institutions have realized that poor health means no future for their students."

In April 2017, China's central government released its Middle and Long-term Youth Development Plan (2016-25), vowing to improve the level of physical health among young people, and urging schools to "toughen the implementation of the National Students' Physical Health Standard and help develop the habit of lifelong exercise".

Tsinghua University, renowned for its long sports traditions, encourages its students to "Be fit and work for the motherland for 50 years".

In 2014, Tsinghua prioritized sports in their orientation course for new students, and over 3,900 enrolled for the sports course last September.

Liu Bo, Tsinghua's head of sports science and physical education, says: "Every semester, students are required to learn one sport, join one sports club, and compete in at least one sports game."

But while Tsinghua has a long history of sporting achievements and excellence to fall back on, colleges without such a heritage sometimes struggle to convince their students of the benefits of an active lifestyle.

Professor Xu Jianbo, from Shandong University's School of Physical Education, believes that colleges could use big data to better prepare students for physical exercise, in addition to greater encouragement from the teaching staff.

"Sports clubs are the heart and soul of a university's sporting activities," says Xu.

"They play a great role in encouraging students to take part in physical activities, and the sports teachers and instructors could provide more advice."