CULTURE A full-blooded passion for helping others

A full-blooded passion for helping others 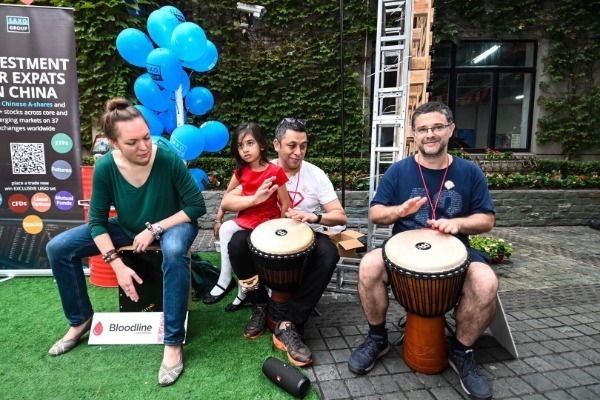 As an orthopedic surgeon, Maskay Ashish knows just how important a role blood plays in the efforts to save patients' lives.

This is why, besides regularly donating blood and blood platelets, the 48-year-old also encourages others to do the same through Bloodline, a nonprofit association which he founded in 2017.

The COVID-19 outbreak earlier this year meant that blood reserves were low as most people were stuck at home and unable to donate blood. To address this issue, Bloodline started a recruitment drive that attracted 200 donors.

For his selfless efforts throughout the years, the Nepali was conferred the Shanghai Magnolia Award in September.

According to Ashish, who has been a doctor at a United Family Healthcare hospital in Shanghai since 2007, Bloodline is aimed at creating a blood bank that can help the community as well as individuals with rare blood types who face an urgent need for blood.

"The motivation for setting up the community was to wipe away tears on the faces of mothers who have children suffering from cancers, help those fathers who have survived traffic accidents, and encourage mothers-to-be who have rare blood types," says Ashish, who first arrived in China in 2003.

This desire to help others, Ashish says, stems from his childhood when he witnessed how his father, a doctor who specialized in treating chest infections, would help the people in their hometown of Kathmandu, Nepal.

"My father only charged those who could afford the medical treatment. For those who couldn't pay, he never mentioned money and instead gave them the drugs for free," he says.

During his growing up years, Ashish was also exposed to social services, helping collect food and money for a local children's hospital.

"Philanthropy became part of my DNA starting from those years," says Ashish, who first donated blood when he was 18.

After arriving in China, Ashish learned mandarin at Fudan University in Shanghai before becoming a graduate student in general surgery at Shanghai Huashan Hospital. Here, he continued participating in blood donation drives as his way of giving back to society.

In 2011, he became a volunteer at the Shanghai Blood Center where he helped plan functions and raise public awareness about blood donations.

The idea of setting up an online community for this cause came in 2013 as he believed that there should be a group of expats who can get together voluntarily to work with patients and organize regular gatherings to raise public awareness.

In 2017, after amassing enough of a following and putting in place a management structure, this community was officially registered as Bloodline.

"Our organization currently has a presence in 14 cities, including Beijing, Suzhou, Dalian, and Guangzhou in China. It's often a small group of people in each city but they can help a great deal," says Ashish, who holds the roles of ambassador and director of the foreign volunteers group at the Shanghai Blood Center.

One of the main focuses of Bloodline this year would be to attract more Chinese members. To do so, the group's Halloween party this year will be the first to involve both expat and Chinese families.

Ashish has also placed greater emphasis on raising awareness of their causes in children, noting that people from the younger generations are more receptive to the idea of donating blood.

In late September, Bloodline held a blood donation drive at a marketplace where children were encouraged to join their parents.

"They just sat on their parents' laps during the donation drive. This was exactly what happened to me each time I donated blood. Children will learn that donating blood is something that is very common after seeing their parents and teachers do so," he says.

Ashish says Bloodline is currently planning to launch a junior club within the organization where youth will get to tour blood donation centers, witness how the blood is processed, who the end users are, and the difference that they can make to the lives of those in need of blood.

"They need to have an emotional attachment to the cause and know why they should donate blood.

Ashish dedicated his Magnolia Award to numerous people, including the 2,000 followers on the WeChat account of Bloodline who have supported his cause of raising awareness of the importance of blood donation and advocating regular blood donation.

"We come from different countries and have different skin colors but the blood streaming through our bodies is the same. When there is a need to roll up sleeves and save lives, we will step forward bravely," he says.

"Why do I do this? My job as a surgeon feeds me and my family. Bloodline, on the other hand, feeds my soul."