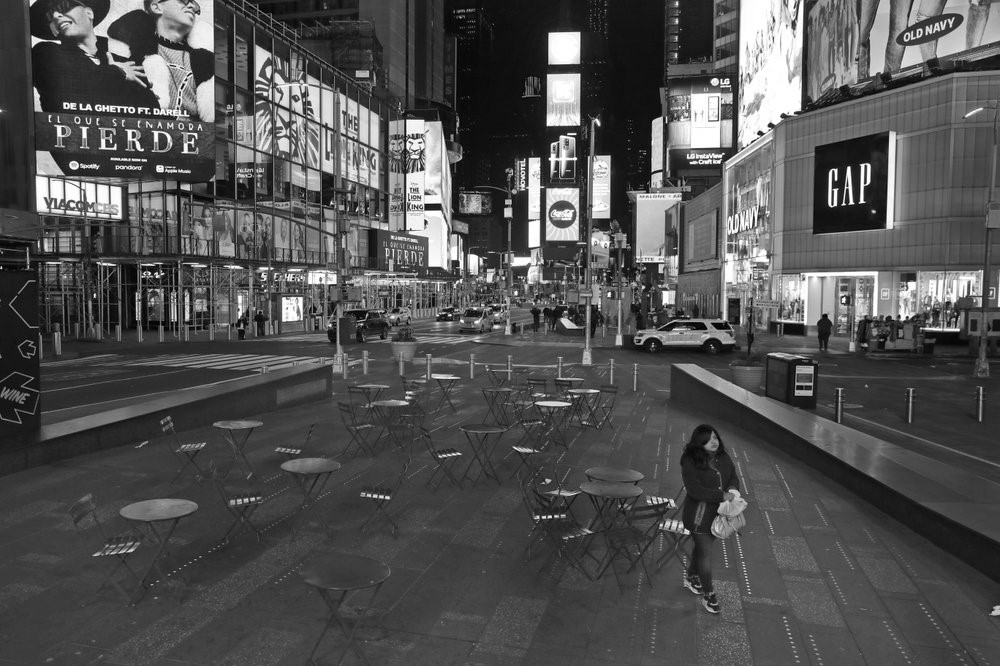 To a casting director, he might have seemed the perfect impatient New Yorker — broad, bald and with a booming voice, tattoos on his neck and hands visible under his construction jacket. Justin Hunter stood in line outside the Park Slope Food Coop, one of several dozen shoppers spaced 6 feet apart in a queue that stretched around the corner.

Hunter’s attitude, though, was all wrong for the part. No griping about store management, no shoving ahead toward the entrance — not even a hint of annoyance.

“That’s your normal, is people being on top of you,” Hunter said about New York. “Now that people are not on top of you, it’s become, ‘Well this is what we’re doing now.’”

Forget the old New Yorker’s refrain of “I’m walking here!” Big Apple citizens are taking a more tentative tack since the city became a hot zone for the novel coronavirus pandemic that has sickened at least 1.1 million people and killed more than 60,000 worldwide.

No pushing forward in lines. No irritably dodging slow-walking pedestrians. No swearing at yellow cabs for cutting into crosswalks. Moms with strollers are leaving wide berths for texting teens and slow-moving seniors. Supermarket shoppers are anxiously and awkwardly sidestepping each other, trying their best to keep six feet away.

New York City’s 8.6 million inhabitants have largely been ordered to stay home, with most of the state’s more than 113,000 cases and 3,500 deaths coming from NYC. A makeshift morgue has been set up outside Bellevue Hospital, and authorities are hunting down beds, medical equipment, doctors and nurses for fear the number of sick people will explode in the coming weeks, overwhelming hospitals the way the virus did in Italy and Spain.

While public health officials grapple with the growing emergency, most New Yorkers have been left in an uncertain limbo — unable to help in any way but to stay at home.

Exceptions have been made for essential employees — health care workers, grocery clerks, restaurant chefs preparing gourmet meals for GrubHub. But most are working from home and going out only for essentials, giving the city that never sleeps a most glum feel.

In Times Square, a custodian idled Wednesday morning with a broom and dustpan, waiting for messes unlikely to appear with no tourists wandering under the bright billboards. Playgrounds and ball fields in Central Park were left empty, as were the stairs in front of the shuttered Metropolitan Museum of Art. Shops along Fifth Avenue — from Bergdorf Goodman down to Saks and Louis Vuitton — remained locked and unvisited, and sidewalks around Manhattan were mostly uninhabited except for a few construction workers and deliverymen from local grocers.

Rush-hour subways are running with two or three riders per car, and bus riders are being kept socially distant from the driver by yellow chains draped across the front seats. Many grocers have placed tape marking six feet of space for checkout lines, and clerks are wearing gloves, masks, and riot gear-like helmets to quell the spread.

Lines at the Park Slope Coop, Hunter’s regular market, have routinely swept around the block. When first faced with the prospect of an hour-long grocery ordeal, Hunter decided to drive to New Jersey. He found the lines there shorter but the crowds unnerving.

“There was less social distancing and less safety with knowledge of like, people use gloves but then they also touch everything and touch their face,” he said. “There’s less awareness.

“New Yorkers generally have a good understanding of what’s happening in this world, rather than people who are outside.”

The coronavirus pandemic has crippled economies and forced restrictions on the movement of millions of people in an effort to stop the virus from spreading further and overwhelming health care systems.

For most people, COVID-19 causes mild or moderate symptoms, such as fever and cough that clear up in two to three weeks. For some, especially older adults and people with existing health problems, it can cause more severe illness, including pneumonia and death.

In Prospect Park a few days ago, Jayse Lee and Makiko Goldstein sat six feet apart on separate blankets with hand sanitizer at the ready. Stuck at home for the past week — Lee celebrated her 39th birthday solo last weekend in her studio apartment — they jumped at the chance to spend an hour in the sun.

“I miss hanging out,” Lee said. “Living in New York, you just don’t realize how much you go out and socialize and do things. It’s hard.”

Might even make someone miss all those crowded subways, gawking tourists and self-important businessmen.

“Yes and no,” Lee said with a laugh. Goldstein interjected.

“I miss that a lot,” she said sadly. “I really miss human contact.”