CULTURE A khan do attitude

A khan do attitude

The latest Bollywood blockbuster to hit Chinese theaters, Sultan, is an emotional tale of wrestling redemption.

From Dangal to Secret Superstar to the Baahubali series, Bollywood hits have garnered a growing number of fans in China over recent years. Moviegoers will therefore be happy to hear that a new Indian blockbuster is about to hit their local movie theaters.

Sultan, a wrestling-themed sports drama in a similar rein to Dangal, will open across the Chinese mainland on Friday, facing off against Tom Cruise's action-packed Mission: Impossible - Fallout which gets its national release the same day.

The movie marks the second appearance by Indian superstar Salman Khan on China's big screen this year, following the Indo-Pakistan drama, Bajrangi Bhaijaan, which was released in early March.

With Khan in the role of the titular character, Sultan Ali Khan, the film is a 170-minute tale of self-redemption.

Once an Olympic wrestling champion, Sultan lives alone in the small town of Haryana after the loss of his son and the breakdown of his marriage.

Indian superstar Salman Khan stars in the upcoming film Sultan, which tells the story of an underdog who fights against all odds to win back the love of his wife, portrayed by actress Anushka Sharma. (Photos provided to China Daily)

Despite his advancing years, he is persuaded to return to the ring by a private mixed martial arts club owner and fight against rivals younger and stronger than him to raise enough money to open a blood bank - a move that will remedy a past mistake and hopefully win back his love.

Khan, one of the most famous faces in India, who shot to fame in the 1989 romantic family drama, Maine Pyar Kiya, told the China Daily in an email interview that he is open to "all genres of film" and decided to shoot Sultan because the story "is very special to me".

"It is about an underdog, fighting against all odds to rise above his failures and to win his lady love back, this was the most appealing thing for me and why I wanted to be a part of the film."

The movie debuted in India in July 2016 and became the country's highest-grossing film that year. When asked about the box office triumph, Khan, who is listed by Forbes magazine as the ninth highest-paid actor in the world, believes the film's focus on family values and love "resonates with the Indian audience".

Despite Khan portraying a number of different roles, Sultan is his first time playing a wrestler. During filming, when the star was 50 years old, Khan embarked on a rigorous training schedule to build up his muscles and master the wrestling skills required for the role.

"I worked with professional wrestlers and also sparred with them. As part of prep, I had to learn wrestling moves and pulls. I had to get my diction right for the character and pick up on body language too," he explained. 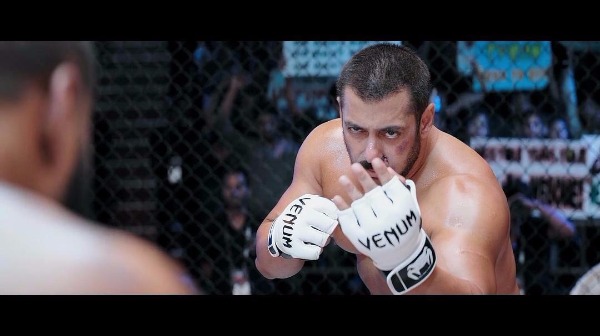 Indian superstar Salman Khan stars in the upcoming film Sultan, which tells the story of an underdog who fights against all odds to win back the love of his wife, portrayed by actress Anushka Sharma.

Although Sultan was released earlier than Dangal in India, the latter made its way to China in May last year.

Aside from enhancing Aamir Khan's popularity, already bolstered by his previous hits such as 3 Idiots and PK, Dangal soared to top the charts as the highest-grossing Indian film in China and the 23rd highest-grossing movie of all time in China.

So, is Khan concerned that Sultan, also an inspirational story about a former wrestler's dream, will be overshadowed by Dangal?

"Dangal is about a father's passion for his daughters. Sultan is, at heart, a love story. It is also about one man's quest to rise above his failures," replied Khan.

Recalling his favorite moment in Sultan, he points to a sequence featuring the protagonist standing next to a mirror to look at his out-of-shape body after being snubbed by a mixed martial arts coach.

"I had to have a potbelly for it," he explained. "When Sultan stares at himself in the mirror, realizing with humiliation and shame that he is in no form to go back to wrestling, I found it emotionally tough. I actually had tears in my eyes."

According to Khan, the script writer and director Ali Abbas Zafar had wanted to shoot Sultan for a long time.

"It represents rural Indian people. It has universally appealing emotions of love, victory and family values," he concluded.

Cover photo: Indian superstar Salman Khan stars in the upcoming film Sultan, which tells the story of an underdog who fights against all odds to win back the love of his wife, portrayed by actress Anushka Sharma.