CULTURE A precious gift: teaching with care and love

A precious gift: teaching with care and love

In the past 28 years, Li Xia has developed from a child-minder to a leader of teachers for 2-year-olds at Soong Ching Ling Kindergarten. Her hard work recently won her a China Welfare Institute (CWI) Preschool Education Prize. 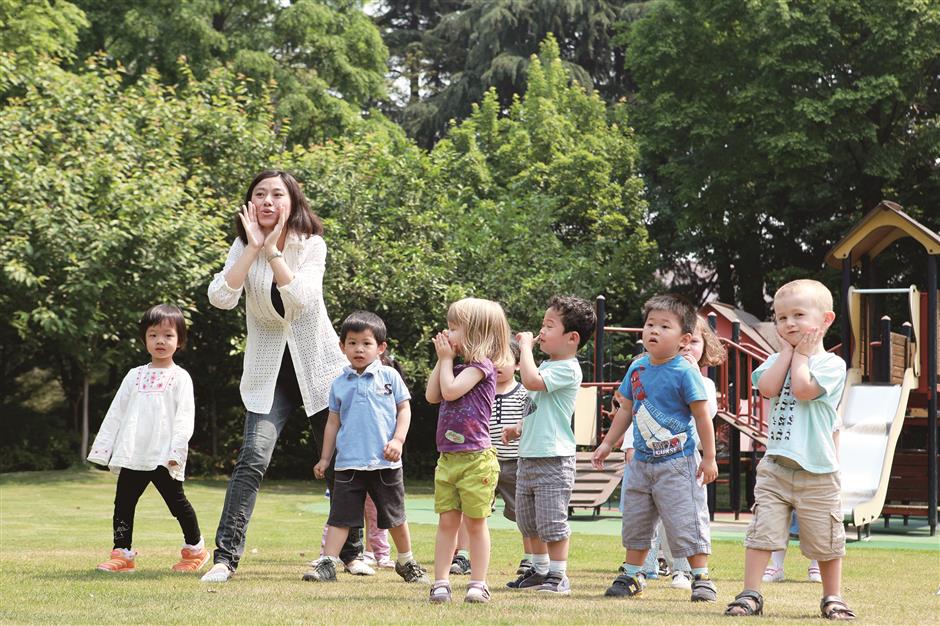 Li Xia, a leader of teachers for 2-year-olds at Soong Ching Ling Kindergarten, plays with the kids. (Photos: Shine.cn)

The secret to her success, the 36-year-old told Shanghai Daily, is the words of CWI founder Soong Ching Ling — give children the most precious. For Li, what is most precious for children is her care and love.

Li said she had been taking care of neighbors’ children since she was a child herself. 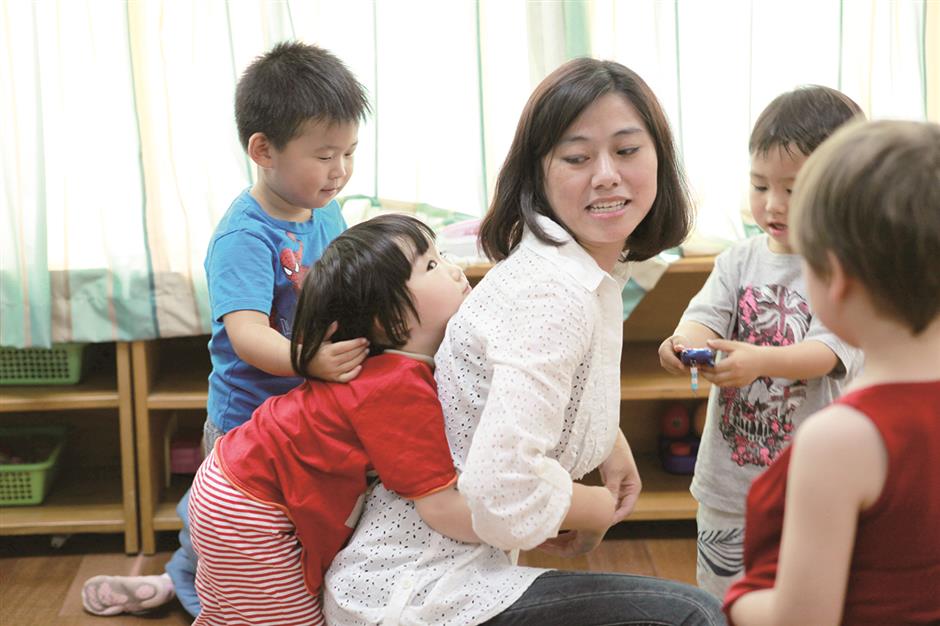 Li has won a China Welfare Institute Preschool Education Prize due to her love and care for the children in the past 28 years.

When she graduated from middle school, she applied for a class in baby-care at a vocational school in order to become a kindergarten teacher. But she was disappointed to find later that the class cultivated child-minders, rather than teachers.

After graduation in 1990, she worked at CWI Kindergarten and then the newly established Soong Ching Ling Kindergarten, a facility also under CWI.

“The kindergarten was a boarding school at that time and we had to take care of everything of the children, from dining to sleeping, and from hair washing to bathing,” said Li. “But as we were so closely cooperating with teachers, I was also able to watch how they worked and learned from them.”

She spent her spare time studying preschool education and got an associate degree at East China Normal University. 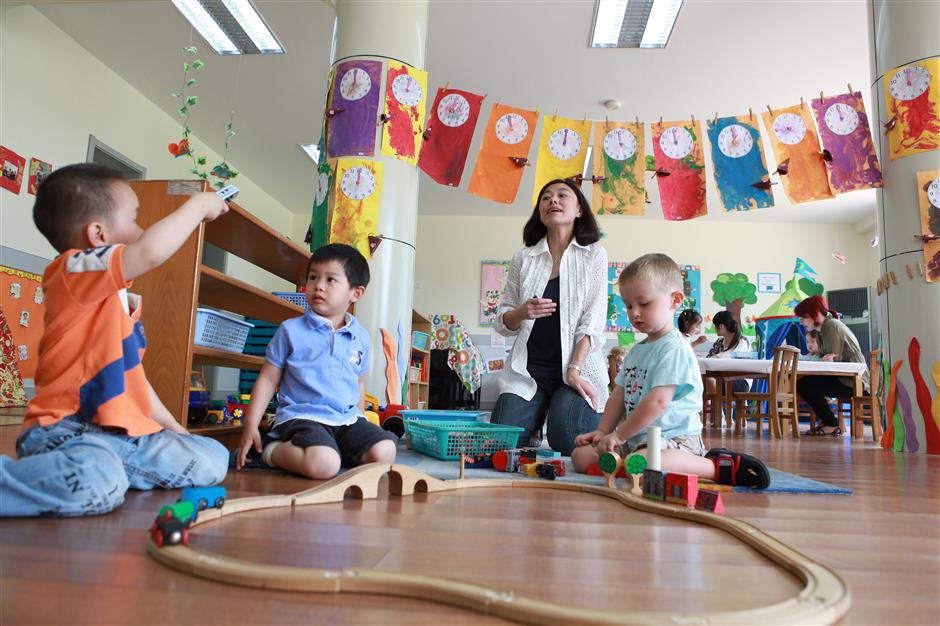 All aboard, as some of Li's children play with a train set.

When a teacher at the kindergarten’s international division fell sick suddenly, the principal asked Li to fill the vacancy in April 1999.

Her new role was to assist an Australian teacher Roseline with teaching.

Roseline told Li she had great potential to be a good teacher and that she would like to teach her related skills.

“She said she had observed me for a long time and found me eager to learn and always be fair and friendly to kids,” Li recalled.

The first thing Roseline taught Li was English. She began to speak only English to Li to help her learn English and improve her capability in bilingual teaching. Li had only learned some English at college and was not confident at all, but Roseline kept speaking English to her and would tell long stories to help her understand new words. 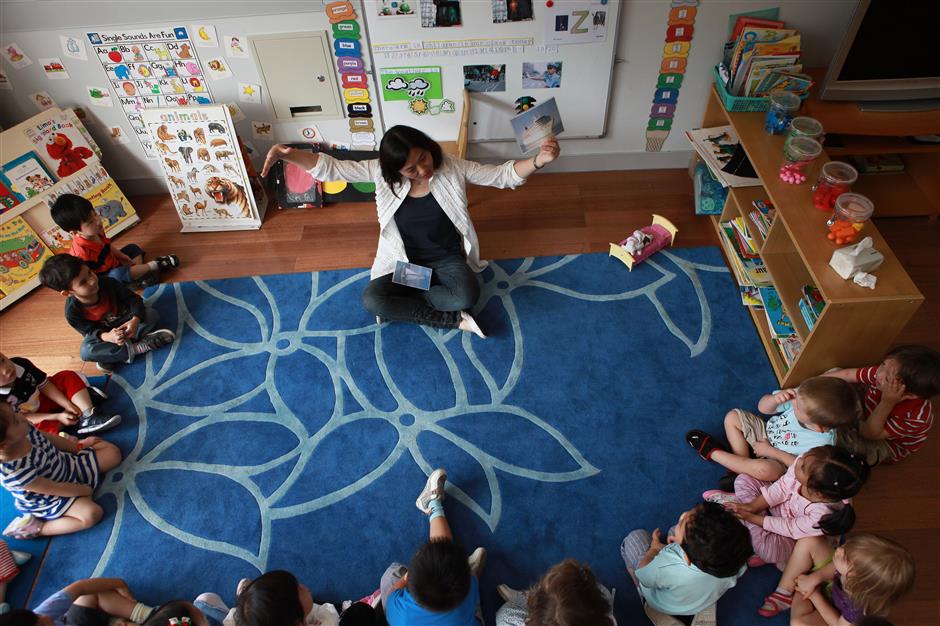 Time for a story as the children listen to Li

“It’s very important because I used to take care of kids older than 3, who are able to express themselves and find things they want,” she said. “But with the new job, I was looking after kids under 3, who could not take care of themselves. It was a challenge for me.”

One day when rearranging the classroom, Li put all the toys on a shelf. The room looked neat and tidy but Roseline explained that it was not a room for 2-year-olds because they would not take the toys out by themselves.

Li took out some toys and put them where children could see them easily. She watched from aside and found that the children played the toys she put out but never touched those on the shelf.

“As Roseline had said, putting toys in the open space is more suitable for 2-year-olds as most of them haven’t developed the consciousness to get toys from the shelves,” said Li. “From then on, I became more attentive to children’s behavior and learn to see education from children’s perspective.”

She also learned from Roseline to use everything as teaching materials. In their classroom, there are buttons, shells, boxes and even brooms on tables, rugs and everywhere, rather than traditional toys.

“Children aged 2 to 3 like imitating adult behavior,” said Li. “In comparison to beautiful toys, they are more interested in things they can see in daily life at home, such as the buttons and brooms. Actually, these things are also helpful. For example, when kids grasp the buttons, they are also exercising their tiny muscles and developing the skills to grasp things accurately.”

With help from Roseline, Li progressed rapidly and became a formal teacher in 2002. She was the first child-minder in the kindergarten and all CWI facilities to turn a teacher.

In December 2004, a 25-month-old British boy, Tommy, entered Li’s class and Li soon found he was quite unique.

“He often reveled in his own world, laughing for unknown reasons, showing no response to sound, indifferent to the environment and never having eye contact with others,” said Li. “The word autism came into my mind.”

She began to record his behavior and also searched for information about autism, comparing it with Tommy’s behavior.

After a month, she brought the records to Tommy’s parents to arouse their attention to his problem.

Li also trained Tommy by repeatedly calling his name, attracting his eyesight and finding more teachers to play with him in the hope of getting a response.

With her care and effort, Tommy began to imitate her movements, use gestures to ask her for help and interact with others.

Li believed that Tommy was not autistic but she found he had difficulty in speaking.

She told her new findings to the parents, who took him to doctors and had comprehensive examinations, including a CT scan. Li’s records were also taken as references.

Finally, doctors found he had language dysfunction as his nerves could not control his facial muscles to express himself.

Tommy’s mother invited a professional from an international hospital to provide language training twice a week for the boy. Li also learned from the trainer to improve dexterity of his tongue and helped with the training.

Tommy gradually began to hug and play with other kids and became healthy and confident. He graduated from the kindergarten with excellent merit.

From then on, Li began to keep records and study on their special behavior or emotions to improve her teaching. She has written more than 100,000 words to record children’s growth and published 18 articles in a preschool education journal.

“Children at this age are too young to learn academic knowledge and teachers should pay more attention to their physical and emotional growth and development of independence and social communication skills. Therefore, they need to observe their emotions and behavior carefully,” she said.

She said many children would cry when they began to attend the kindergarten, but they cry differently. Some would cry hysterically, while some just sob quietly. Li tries to identify their personalities according to the way they cry and communicate with them accordingly.

She said teachers need to love children by nature and those who keep a distance from children could not be good teachers.

“I believe that academic knowledge is not the most important thing for teachers. Instead, what makes teachers professional are love and tolerance,” said Li. “We need to be more caring and tolerant than parents and have more methods to solve their emotional and behavioral problems.”