CULTURE A rose for a rose

A rose for a rose 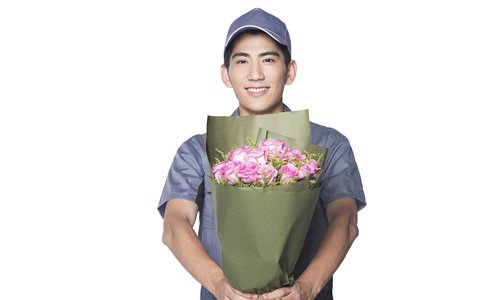 Behind each flower delivery is a fleet of hardworking vendors and deliverymen. (Photos: VCG)

Once a traditional Chinese festival during which young women pray for wisdom and good weaving and embroidery skills, Qixi has become another version of Valentine's Day, filled with gifts and flowers, especially roses. It is a day when young Chinese work up enough courage to express their affection for each other.

The couriers of romantic gestures, Qixi's deliverymen and flower vendors sometimes do not have time to celebrate the day themselves.

With flowers being a mainstay of the celebration, Qixi has also become one of the busiest days for flower deliverymen and vendors.

Thirty-five-year-old Liu (pseudonym) from Gansu Province belongs to the millions of deliveymen in China. Although he has only been with his current company for two months, he is already very proficient and understands the whole process, from taking pictures of the flowers and uploading them online for the customers to see to carefully wrapping the flowers before putting them in a big box on the back of his motorcycle for delivery. Liu told Metropolitan that he has seen a rise in the number of flower purchases in recent weeks.

"My wife and daughter are in my hometown. I know that [my wife] also loves flowers, but it is not convenient for me to send any for her," Liu said, wishing all couples a happy Qixi festival.

Gao from the Inner Mongolia Autonomous Region has lived in Beijing for over a year. Different from most deliverymen, Gao dresses as a clown and does magic tricks when he delivers flowers.

"When I first started the job a month ago, I felt embarrassed riding around on the street. But I feel more comfortable now," said Gao who is single and confessed to envying the happy couples he comes across on the job.

The idea to dress up as a clown to deliver flowers came from his boss, Zhao Feifan, who owns several flower shops in Beijing.

"In 2006, when I was sitting on a bench in Wangfujin for a rest, I saw a little girl approach a man and ask if he would like to buy some flowers for his partner, but the man just shook his head," Zhao said. "Then I thought if I were the girl how I would promote the flowers, and the idea of a clown came to mind." 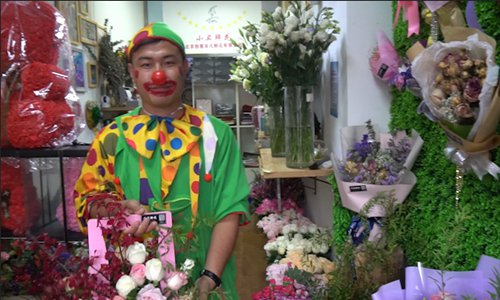 Mou,25, from Gansu Province and Wang from Hubei Province are flower vendors at a wholesale market in suburban Beijing. At 4 am, when it is still dark outside, Mou and Wang are already busy packing and arranging flowers for their customers, most of whom are flower shop owners.

Liu picks up a bouquet of flowers at a wholesale market.

Wang said the demand for roses has surged recently. "During the off-season, one box of roses could take three days to sell. Now, I sell three boxes a day, which is more than 4,000 roses," Wang told Metropolitan.

"I get up at 3:30 am, and the day's work often finishes at 10 pm," Mou said. "I have not thought about whether my husband will give me a present on Qixi. I just wish I could finish work earlier and get some rest."