CULTURE A slam dunk for NBA stars in China

A slam dunk for NBA stars in China 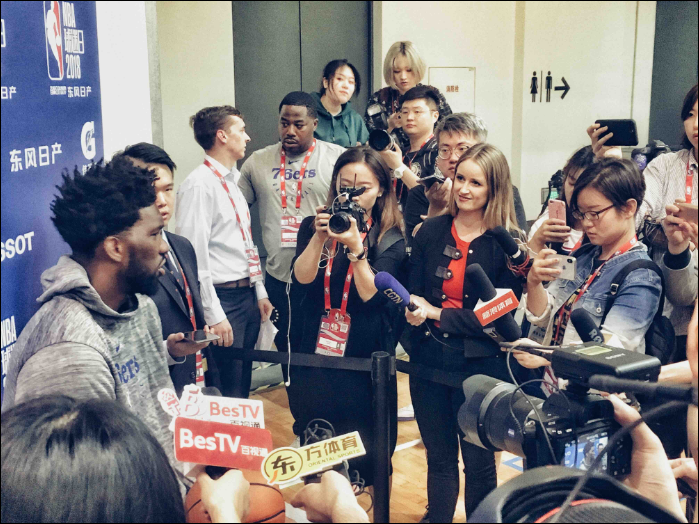 Whether it's teams arriving for pre-season games or individual players promoting shoe deals, the influx of NBA stars visiting China has only accelerated the sport's growth.

And this year's no different with the Dallas Mavericks and the Philadelphia 76ers, the latest teams to play in the country. The first of two pre-season games took place on Friday in Shanghai, with Shenzhen set for Monday.

"I just want to have fun," Sixers forward Joel Embiid admitted. "It's my first time here. You know. I have learned a lot. I learned about my nicknames here."

"For a long time, I've been excited to come, and I am finally here. I want to enjoy it. Get to know another culture and just enjoy it."

It's the players themselves who are reaping a lot of the rewards with the likes of Golden State Warriors All-Star Klay Thompson, now nicknamed China Klay after his recent visit, becoming one of only a handful of NBA players to wear shoes by longtime Chinese athletic brand Anta.

And the trend seems to be spreading with new NBA faces in China also wanting a piece of the action.

"NBA basketball is so popular here in this end of the world. The Chinese fans are unbelievable," 76ers forward Dario Saric said. "They were waiting for us in front of the hotel. In the hotel they tried to take some pictures with us, some signatures."

"It was just amazing to be part of that," the Croatian added. "That's the future of the basketball. Most people in the East have started to follow basketball. I think that's only a good thing for the NBA."

For the Sixers and the Mavs, they head to China at a time when the NBA is at an all-time high both in the US and outside.

"We love our relationship that we have with Beijing, Shanghai, Shenzhen, Hong Kong, all these places. It's very important to us as a league."

This year's pre-season marks the NBA's 25th and 26th games in China and neither team are taking anything for granted.

"Their interests, their infrastructure, their passion is elite. It's world recognized," 76ers head coach Brett Brown said. "What that produces in relation to players coming through and playing in the NBA I don't know."

"We have a lot of respect for what's going on in China as it relates to basketball currently," he added.

Today, in China, the NBA lead the way in terms of live streaming, digital viewers and even online followers on Chinese social media site Weibo. It's no surprise that the NBA Global Games has been played in the country since 2004.

Both players and teams alike will be hoping this trend continues, and with the NBA experiencing record growth in the country, particularly in comparison to leagues such as MLB and NFL, it's not looking likely to stop anytime soon.