CULTURE A toast to the goji

A toast to the goji

Popular chefs and food professionals get together to honor the regional specialty in an event to celebrate its diversity. 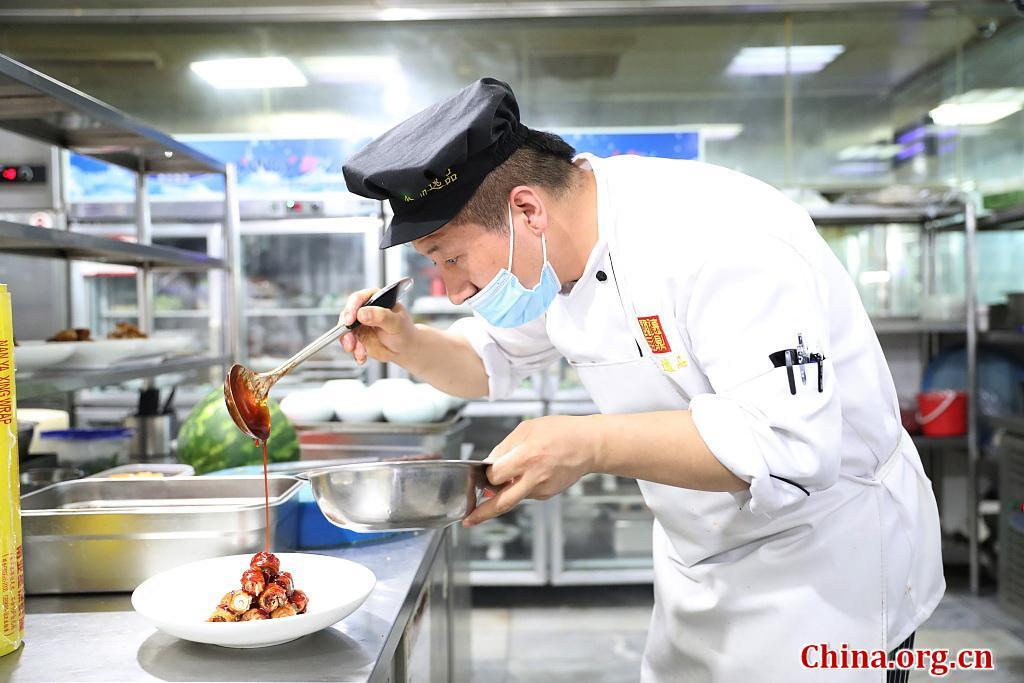 Sauce from the fruit is delicately poured on a dish. (Photos: VCG)

Fancy a goji berry themed feast? How about crispy goji berry lamb, stewed fish head with goji berries, marinated asparagus and shrimp in goji berry sauce, and chicken roll with egg yolk and goji berry filling? All these dishes were on the menu at a tasting event, which was also broadcast on several online platforms, in Yinchuan, the Ningxia Hui autonomous region, on March 6.

Also known as gouqi or the Chinese wolfberry, the berry is a specialty of Ningxia. It is said that goji berries have been planted in the region for more than 500 years. According to a 2019 report on Ningxia's goji berries, there were about 67,000 hectares of goji berry fields in Ningxia in 2019, occupying one-third of the total goji berry cultivation area in China.

In October, a research and development group was formed to develop the goji berry tasting event, gathering popular chefs and service professionals in Yinchuan.

The group then visited Jiangsu province's Yangzhou and Guizhou province's Zunyi to learn how to create a themed feast. Yangzhou is famous for its traditional Huaiyang cuisine and Zunyi's bamboo feast is also quite popular.

They talked to experts in both cities on various aspects of a themed feast including the naming of dishes, plating and serving. It took them three months to create the goji berry tasting event.

Chen Hao, head of the research and development group, says that the goji berries in all 28 dishes are not only used in a fresh fruit form, but parts of the plant are also used. The berries are also added to the dishes roasted or as a sauce.

"The root, stem, leaf and sprouts of the Chinese wolfberry are all used as ingredients in the dishes," he says.

"It's the first time in Ningxia that a feast is created focused on goji berries. We hope that through our goji berry feast, we can present Ningxia goji berries to the world."

Apart from goji berries being the mainstay on the table, Ningxia's other signature ingredients also featured in the feast including lamb and fish from Sand Lake wetland in Ningxia's Shizuishan, as well as local chicken and beef.

Just like how Peking duck is eaten, the crispy lamb is served with goji berry powder, various sauces and thin pancakes. A slice of crispy lamb skin and a piece of meat are placed onto the pancake, along with a dollop of sauce and powder, and then rolled up and eaten. The sweet and sour flavor of the goji berry powder pairs well with the crispiness of the lamb. 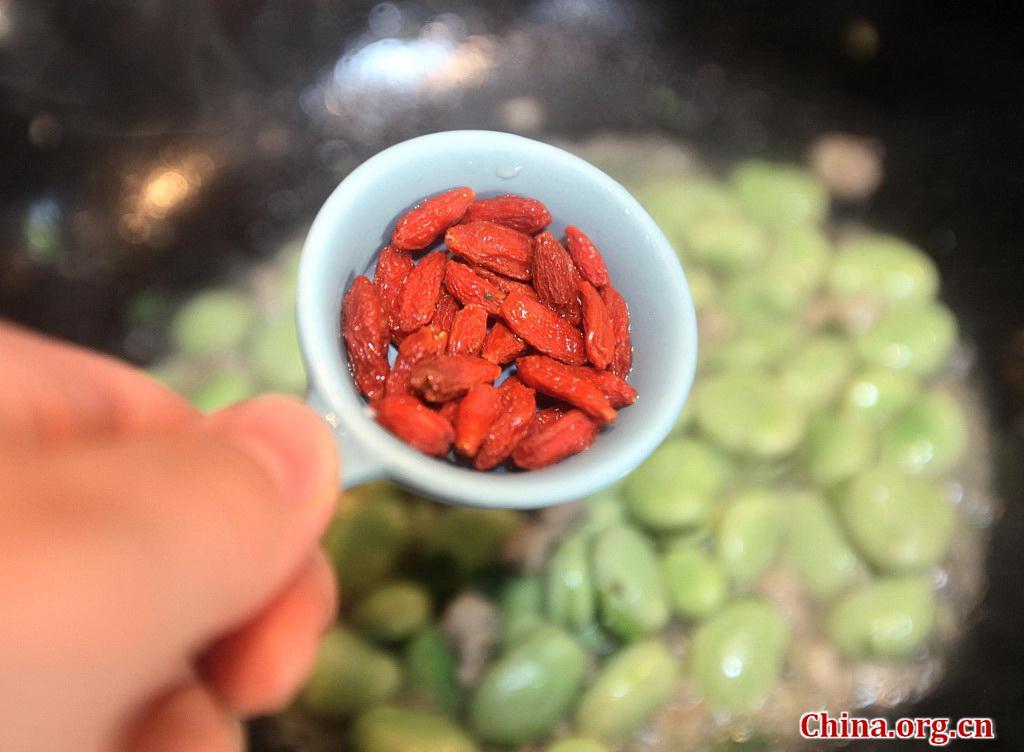 In the stewed fish head dish, the fish skin is made into a jelly together with the goji berry leaves. Even the fish scales are boiled into jelly which is used to encase goji berries, making it a pretty snack.

Local food critic Zhang Lei's first impression of the feast is that it is healthy and fashionable.

"I'm impressed by the fish head soup as the freshness of the soup pairs perfectly well with the sweetness of the goji berries," Zhang says.

Other than the food, the logo, menu, plating and service process of the goji berry tasting event are all elaborately designed by the team.

Qiao Wenwei, who is responsible for researching the cultural significance and historical knowledge of the food, says they have also designed special tableware for the event.

Liu Zhiyong, deputy director of Yinchuan's commerce bureau, says the entire feast is like a presentation of Ningxia's delicacies.

"It's not only a full table of delicacies, but also guides and encourages the catering industry in Ningxia. We hope the goji berry feast can take the lead in the new healthy eating trend and make a name for itself in Ningxia's catering and tourism," Liu says.

"This is one step in cultivating a complex consumption chain which combines shopping, catering and tourism toward our goal of promoting consumption upgrade."

Liu says the feast is not only a combination of goji berries and food, but also links local culture and history together. The development of the feast is the result of a modern, high quality and healthy food study.

Not only are the authentic flavors of local cuisine retained, but Liu also believes the team considered the preferences of tourists and the food wastage problem. Some dishes are suitable for home cooking, as the recipes can be adjusted to make smaller portions. The team says the recipes will be published for the general public.

Chen Zhiwei, deputy head of Ningxia's regional commerce department, says the cultivation area of goji berries in Ningxia is large, and the region is in the lead for the cultivation of new varieties and planting technology in China.

"Goji berries from Ningxia can be made into multiple products including juice, powder, candy and tea, which have been sold across China and the world," he says.