To celebrate the most magnificent of all traditional Chinese holidays, the Palace Museum presents “Celebrating the Spring Festival in the Forbidden City” from January 6 through April 7, 2019 in the galleries atop the Meridian Gate, also known as Wu men in Chinese. A record number of 885 antiques are on display and 145 time-honored Chinese brands have brought their special products to this gallery. The displays include works from the Palace Museum, the First Historical Archives, Shenyang Palace Museum, Capital Museum and the Temple of Heaven Park. 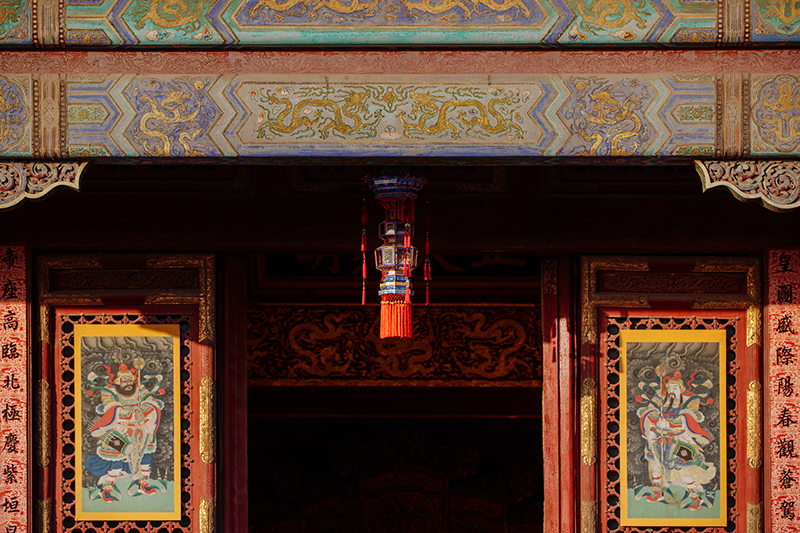 Visiting areas of the Forbidden City with Spring Festival decorations. (File photos: screenshots from the official webiste of the Palace Museum)

Meanwhile, the visiting areas of the Forbidden City are transformed into a Spring Festival cultural experience with auspicious poetic couplets, duilian or chunlian, and images of guardian gods, or menshen, which literally means “gate god”, on the doors of the palace halls, lanterns placed throughout porticos, and heavenly lanterns, tiandeng, and longevity lanterns, wanshou deng, at the Palace of Heavenly Purity, Qianqing gong, and the Hall of Imperial Supremacy, Huangji dian.

The exhibition is presented in three main sections to help introduce the historical celebrations. Journalists from People’s Daily app took a tour of the whole exhibition to see how emperors and their families celebrated the Spring Festival back in the Qing Dynasty.

The first section shows the auspicious invocation during the Spring Festival back over two centuries in China. It presents such indispensable features of the Spring Festival as “blessing” characters, fu, poetic couplets, pairs of guardian gods on doors, and other auspicious decorations intended as prayers for good fortune throughout the year. Paintings for the new year, suichao tu, heavenly lanterns, longevity lanterns, and ornamental lanterns reflect unique characteristics of the imperial court. These and other items express the traditional beliefs of driving off evil spirits, praying for blessings, and other wishes. On view are works of imperial calligraphy in the form of “blessing” characters by the Kangxi (1662–1722), Yongzheng (1723–1735), Qianlong (1736–1795), Jiaqing (1796–1820), and Daoguang (1821–1850) emperors.