CULTURE A whiff of change, of many kinds, at post-Weinstein Oscars

A whiff of change, of many kinds, at post-Weinstein Oscars 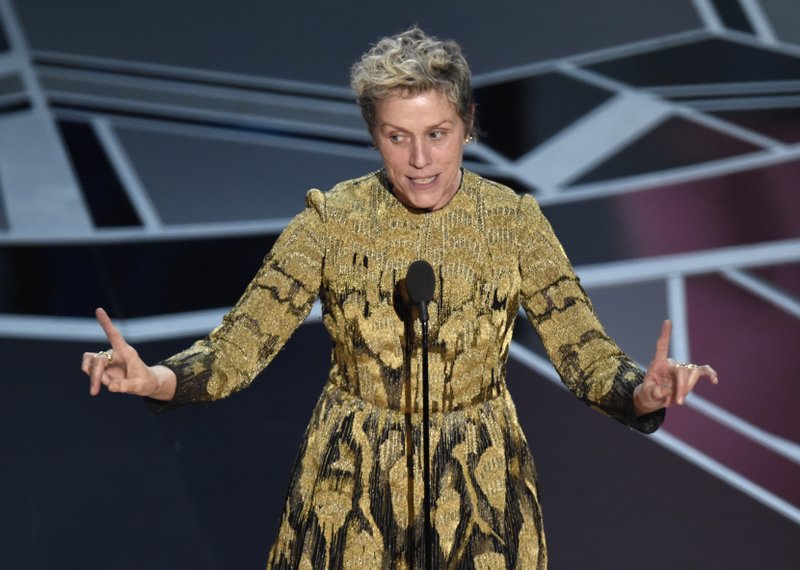 “Look around, ladies and gentlemen,” Frances McDormand said during her best actress acceptance speech. “We all have stories to tell.” She was referring to the female Oscar nominees in the Dolby Theatre, all of whom she’d asked to stand in unison. But it felt like she was also addressing the evening’s broader vibe: Change, of many kinds, at the first post-Harvey Weinstein Academy Awards.

There were, of course, plenty of #MeToo moments in Sunday night’s ceremony, including an emotional appearance by three of Weinstein’s most prominent Hollywood accusers. But there were storylines, too, about different kinds of diversity: racial, geographic, generational.

“This is a door. Kick it open and come in,” said Mexican director Guillermo del Toro in the evening’s final speech, accepting the best picture award for his warm-hearted fantasy “The Shape of Water.” His remarks, too, could be seen in a broader context: Hollywood is ready for something new. At least, that’s what this Oscar evening felt like. Here are a few notable moments, both serious and lighthearted:

KIMMEL GETS RIGHT TO IT 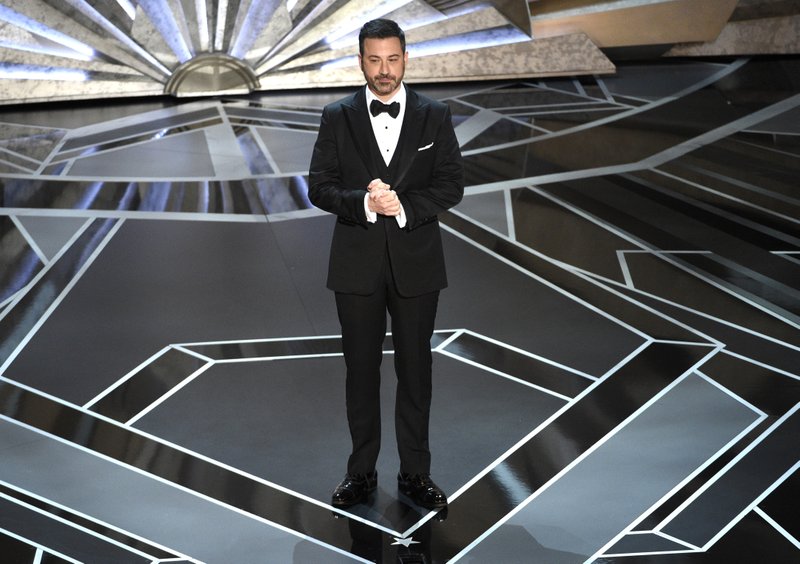 There had been some question as to whether Jimmy Kimmel would address the elephant in the room, and how soon. Well, he got right to it in his opening monologue, evoking the now-disgraced name of Weinstein, only months ago one of the Oscars’ biggest players, now banished from the academy. Kimmel also turned serious, addressing not only sexual misconduct but the gender pay gap. And he told the assembled Hollywood elite: “The world is watching us. We need to set a good example.”

At the Golden Globes, women wore black. At the Grammys, they carried white flowers. By the time Sunday’s Oscars rolled around, the dress code was finished, and talk was of moving ahead to a new phase of #MeToo and Time’s Up. “We did the dress code thing,” Tarana Burke, founder of the #MeToo movement, told The Associated Press, “and now we’re doing the work. The plan is to continue to do this work to give people resources.” She said that millions of people had used the famous hashtag, and they all had stories and needs that must be addressed.

SOMEONE REALLY GOT THE SKI

In a humorous bit that began early and wore well, Kimmel promised a jet ski to the winner with the most concise speech. He even had Helen Mirren pose with the ski, a la “Let’s Make A Deal.” Then he let the winners riff on it all night. “Obviously I’m not going to win the ski,” quipped best-actor winner Gary Oldman (“Darkest Hour”) as he dug deeper into his list of thank-yous. The winner: “Phantom Thread” costume designer Mark Bridges, who rode onstage triumphantly in the vehicle at the end of the show — accompanied by Mirren, of course. 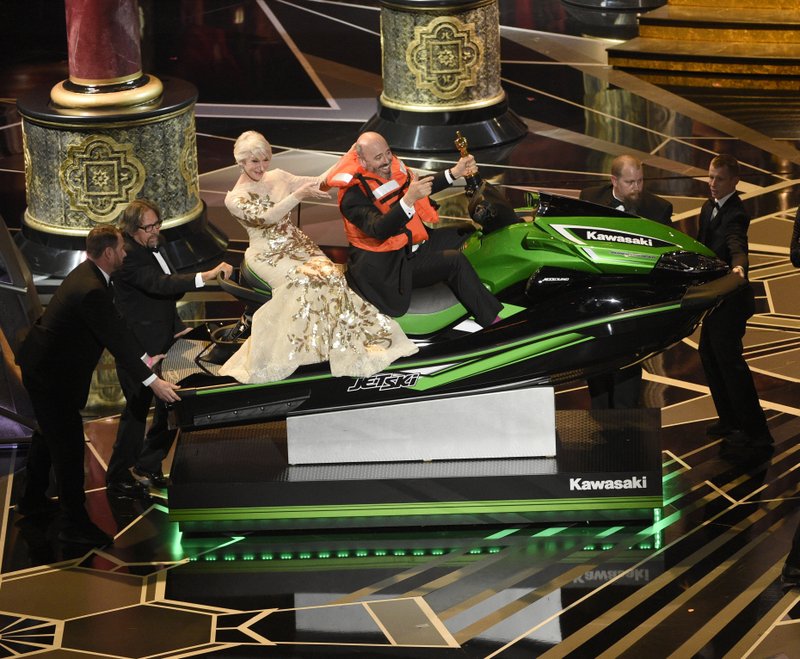 HERE’S TO THE ONES THAT DREAM

Although President Donald Trump was barely mentioned during the evening, his policies were referred to in various ways. Presenting an award, Pakistani-born comedian Kumail Nanjiani and Kenyan-born Lupita Nyong’o saluted the so-called Dreamers — immigrants brought to the U.S. illegally as children and here without permanent protection from deportation. “Like everyone in this room and everyone watching at home, we are dreamers,” Nyong’o said. “We grew up dreaming of one day working in the movies. Dreams are the foundation of Hollywood and dreams are the foundation of America.” Nanjiani added: “And, so, to all the Dreamers out there, we stand with you.”

WEINSTEIN ACCUSERS HAVE THEIR MOMENT

It was the most emotional #MeToo moment of the evening: Three actresses who were instrumental in the breaking and unfolding of the Weinstein story, emerging to push for diversity of all kinds in filmmaking.

Ashley Judd, whose accusations appeared in the first New York Times article breaking the story last October, spoke of “the powerful sound of new voices, of different voices, of OUR voices, joining together in a mighty chorus that is finally saying, ‘Time’s Up!’” Annabella Sciorra, who told The New Yorker magazine in a searing interview that Weinstein had raped her, noted that “the journey ahead is long. But slowly a new path has emerged.” And Hayek, who wrote a first-person piece calling Weinstein “my monster too,” saluted “those unstoppable spirits who kicked ass and broke through the ... biased perceptions against their gender, race and ethnicity to tell their stories.”

Though women were a prime focus of the evening, a few potential milestones were missed. Greta Gerwig, the “Lady Bird” director seeking to become only the second woman to win the category, was passed over for del Toro — as expected. And Rachel Morrison (“Mudbound”), the first woman nominated in cinematography, lost to Roger Deakins (“Blade Runner 2049”), winning on his 14th try. The official winner’s list showed only six female winners in 24 categories, compared to 33 men. 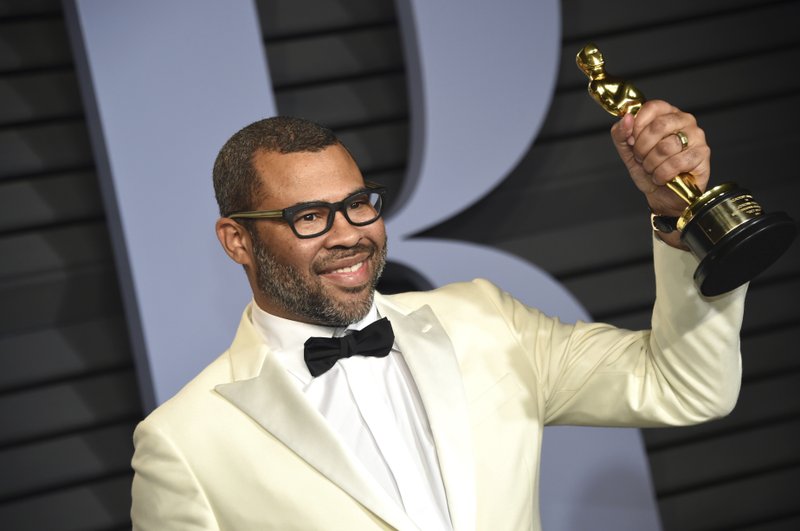 If you ever wanted inspiration to keep plugging away at something, listen to Jordan Peele, who made history as the first African-American to win best original screenplay, for his groundbreaking horror film, “Get Out.” (It was also his big-screen directorial debut.) Peele told the crowd: “I stopped writing this movie about 20 times because I thought it was impossible. I thought it wasn’t going to work.” But he kept trying, he said, “because I knew if someone let me make this movie, that people would hear it and people would see it.”

Every Oscar ceremony has its poignant shoutouts to Mom. This year, Oldman saluted his almost “99-years-young” mother back at home with the words: “Put the kettle on, I’m bringing Oscar home.” And Gerwig, who created such an evocative mother-daughter relationship in “Lady Bird,” surely endeared herself even more to the world’s mothers when, asked what she would say to her 17-year-old self, she said: “Be nicer to you mother.”

MERYL IN THE MIDDLE

Meryl Streep always seems to be in the middle of the discussion at the Oscars, onstage or not. The actress, nominated yet again for “The Post,” didn’t win, but people referred to her constantly. Kimmel quipped that she didn’t get nominated for a stretch in the ’90s, but “that’s only because she was in prison.” Tiffany Haddish curtsied to Streep on the carpet, then gushed about her onstage. And Jodie Foster and Jennifer Lawrence did a comedy routine about the venerated actress. Foster explained that she was on crutches because Streep “I, Tonya’d me.” Lawrence commiserated that Streep had tripped her once.

McDORMAND HAS SOMETHING TO SAY

She said she had something to say, and she did: McDormand enthusiastically exhorted all the women nominees in the room (especially Streep!) to stand up with her, “the actors, the filmmakers, the producers, the director, the writers, the cinematographer, the composers, the songwriters, the designers....” After urging Hollywood to tell their stories, she ended with a two-word message to fellow women in Hollywood: “Inclusion Rider” — referring to a star’s ability to demand in their contract a level of diversity in the staffing of a film, both in front of and behind the camera. 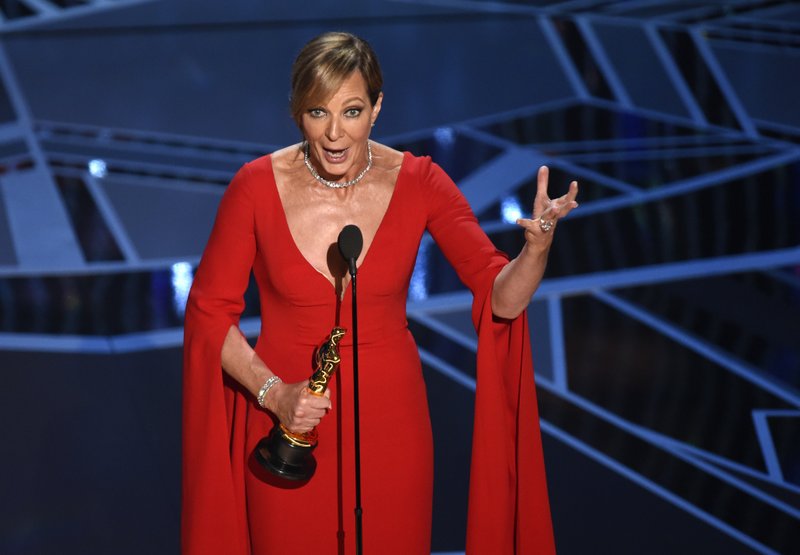 Some Oscar winners can’t help it: They thank everyone in the phone book. Allison Janney took a different tack. The supporting actress winner (“I, Tonya”) took the stage and declared: “I did it all by myself.” After a sweet smile, she explained that “nothing is farther from the truth” — and gave her thank-yous.