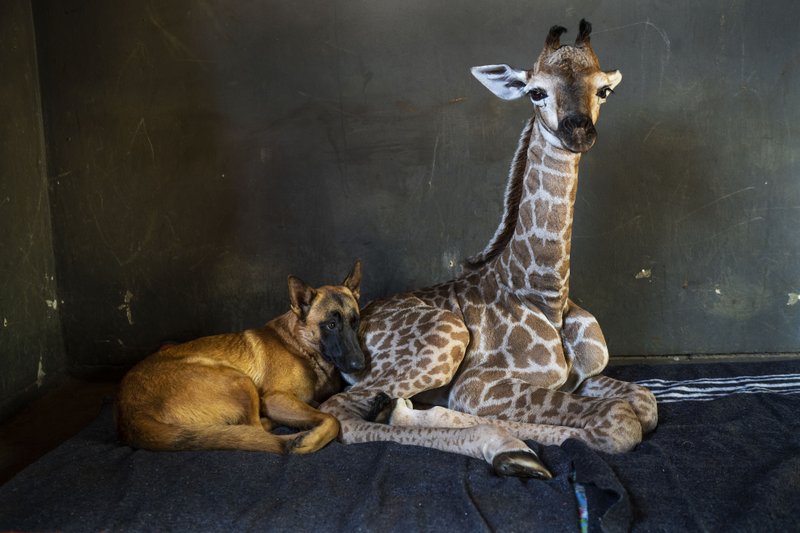 In this Friday Nov 22, 2019 file photo, Hunter, a young Belgian Malinois, keeps an eye on Jazz, a nine-day-old giraffe at the Rhino orphanage in the Limpopo province of South Africa. Jazz, who was brought in after being abandoned by her mother at birth, died of brain hemorrhaging and hyphema it was announced Friday, Dec. 6, 2019. (Photo: AP)

A baby giraffe that was befriended by a dog after it was abandoned in the wild has died, a South African animal orphanage said Friday. “Our team is heartbroken,” the orphanage said.

Jazz the giraffe collapsed after hemorrhaging in the brain, The Rhino Orphanage said in a Facebook post. “The last two days before we lost him, Jazz started looking unstable on his legs and very dull, almost like he wasn’t registering everything,” it said. “He suddenly collapsed and we could see blood starting to pool back into his eyes.”

Resident watchdog Hunter seemed to realize something was wrong and didn’t leave the baby giraffe’s side, and was there when it died, the orphanage said. The dog then sat in front of the empty room for hours before going to its carers “for comfort.”

People had expected this to happen, assuming that the mother giraffe had abandoned the baby for a reason, Arrie van Deventer, the orphanage’s founder, told The Associated Press.

“So we finally know that Jazz didn’t have a bad giraffe mother that left him,” the orphanage’s statement said. “She just knew. ... But we still have to try every single time (to help) no matter how hard it is.”

The baby giraffe had arrived a few weeks ago, just days after birth. A farmer found him in the wild, weak and dehydrated, and called the center for help.

In its farewell to the giraffe, the orphanage said that “You have taught us so much in the last three weeks and we will remember you fondly.”″

The giraffe was buried close to the orphanage, van Deventer said.