CULTURE Abercrombie & Fitch puts Its clothes back on

Abercrombie & Fitch puts Its clothes back on 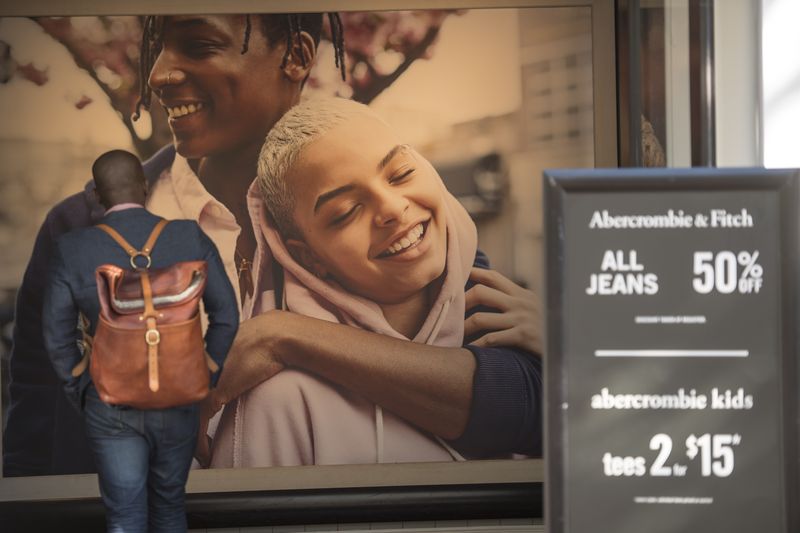 Abercrombie & Fitch’s new television commercial—its first in more than a decade—lacks the bare skin and chiseled torsos that once defined the label. Instead, a man in a rugged coat gamely stands in the snow, a bicycle atop his car. Twenty-somethings shoot pumpkins with a slingshot on a farm. Two women kiss at a club.

After years of declining sales, Abercrombie & Fitch Co. is reinventing its namesake brand and shunning the exclusionary preppy stereotypes that made it a powerhouse of teen clothing. Its new merchandise and the accompanying campaign portray a more mature version of Abercrombie, pushing adventure and playfulness over exclusivity and sex appeal. They hark back to the original brand motif, an outfitter that catered to adults going fly fishing or mountain climbing, not high school kids amped-up on pheromones. The new spot even uses the old A&F logo, a relic of the company’s early days.

All that history allows the label to be “very genuine, very realistic,” said Fran Horowitz, chief executive officer at Abercrombie & Fitch. “It’s a chance to move off some of the misnomers of the brand.”

Abercrombie has been undergoing a years-long transformation since former CEO and lightning rod Mike Jeffries stepped down in 2014. Some of the changes have been Retail 101: adding window displays, dialing back the music and turning up the lights. The store also put the kibosh on pumping cologne into its stores. Others changes were aimed at building a new following: In July, Abercrombie launched on Tmall, China’s largest consumer platform.

Some remain skeptical that the brand can regain its status. Abercrombie abandoned talks with potential suitors in July to pursue its own turnaround plan. The company pledged to generate better returns for shareholders, though so far, success has been hard to come by. The chain has posted falling comparable sales for five straight years. While sister brand Hollister made a comeback by dropping logos and repositioning itself as a more carefree chain, Abercrombie has been unable to stop its overall decline.

“It’s definitely not the traditional Abercrombie,” Simeon Siegel, an analyst at Instinet LLC said of Abercrombie’s new look. The ad, he said, tells a good story, but he’s unsure it will win over shoppers. “The question is, does it resonate?”

In the early 1900s, Abercrombie’s store on New York’s Madison Avenue was a 12-story outdoorsman’s wonderland full of gear and clothing. It sold surf boards and skis for sports lovers. Hunters bought guns and military jackets; fishermen perused rods and reels; and shoppers took golf classes or practiced shooting at a range down in the basement. There was even a summer shop in Cape Cod, Massachusetts, for the yachting crowd. Over the years, it boasted such legendary adventurers as customers as President Theodore Roosevelt and polar explorer Roald Amundsen.

Back then, Abercrombie’s fashion aesthetic represented utilitarian pragmatism. Those were hardy goods for pioneers and pathfinders. These days, that vintage outdoor style has seeped into trendy urban closets. Rustic brands are often seen on city sidewalks and inside office towers. L.L. Bean Inc. duck boots are worn by sorority girls, and Carhartt Inc. jackets can be seen hanging from cubicle chairs. The patch of Canada Goose Inc., which makes parkas built to withstand the most extreme environments, appears on every Manhattan block come winter.

The new merchandise at Abercrombie reflects that trend. Sure, it still sells a collection of moose logo polo shirts and hoodies with the brand name flashed across the chest, but much of the offering is now made up of more vintage looks. There are field jackets and sweaters with chunky knits, flannel shirt dresses and jumpsuits that look like overalls. The plaid wool duffel coats look straight out of Abercrombie’s 1949 catalog.

In 2017, the legacy brand may not be outfitting East African safaris and polar expeditions, but it’s leaning on that history. Horowitz hopes the adventurous image will endure as part of a consumer’s everyday routine, such as a hike away from the city with friends or a spontaneous night out after work.

“It’s a modern adventure,” said Horowitz. “It’s what made us great in the past.”