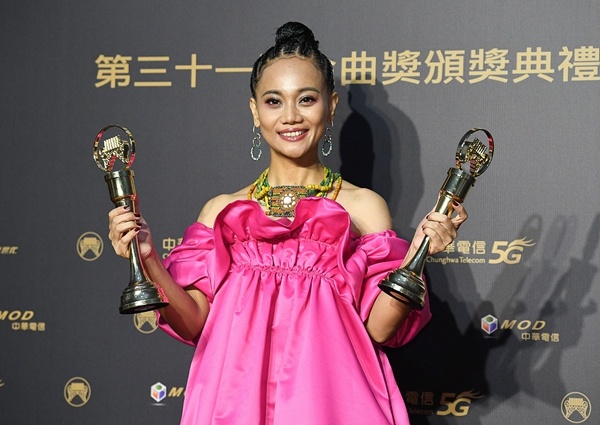 Abao, a local aboriginal singer in Taiwan, became the biggest winner - Album of the Year and Best Aboriginal Album for "Kinakaian (Mother Tongue)" and Song of the Year for "Thank You."

As the most influential annual musical celebration in the Chinese music world, the Golden Melody Awards feature fierce competitions. Abao, whose full name is Aljenljeng Tjaluvie, led the way by receiving eight nominations.

She started her career as a member of a female duo Abao & Brandy in 2003. But she left the scene for a decade after the duo disbanded, only returning to the music scene a solo indigenous singer. In 2017, Abao won the Best Indigenous Album at the 28th Golden Melody Awards with "Vavayan," her second solo album.

"Thank all of you who had listened to, played and shared my album," she said at the awards ceremony. "Thank you for trying to listen to something you don't understand, as this is really not easy. Through this album, I hope you can understand more about the life of a minority. It's not only about indigenous people, but also about many other 'minorities'. In music, we can have dialogues. I hope to foster more understanding and less misunderstanding."

The album can be heard on China's popular streaming platforms such as QQ Music.

Her three victories also made Universal Music Greater China the biggest winner of the night, which was also successful with Wu Qing-feng, crowned the Best Male Mandarin Singer for his debut solo album "Spaceman". By winning this award, he has become the first male musician in the history of Golden Melody Awards to collect all five top awards of Best Lyrics, Best Composition, Best Music Arrangement, Best Band and Best Male Mandarin Singer, though in different years.