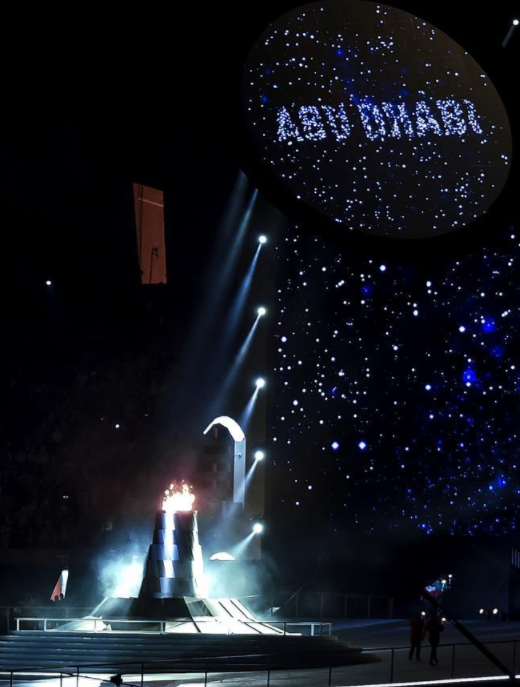 The cauldron is lit during the opening ceremony of the 2019 Abu Dhabi Special Olympics World Games in Abu Dhabi, the United Arab Emirates, on March 14, 2019. (Photo: Xinhua)

After the countdown in the Zayed Sports City with capacity of 55,000 audiences, a children's choir started the opening ceremony.

With great joy and pride, thousands of athletes stepped on the stage, danced and waved to the cheering audiences.

"You have won the most important race already, you have already changed the time of history, and the face of the sport," said Timothy Shriver, Chairman of the Special Olympics.

An artificial sun rose from the top of the stadium, carrying the flame of hope on it. Athletes from seven continents circled the stadium with the torches holding in their hands. After the Games were officially announced to have started, the athletes gathered around a cauldron and lit the Special Olympics flame.

Several new records have already been set in Abu Dhabi according to the organizing committee. For the first time there are 200 delegations taking part with 195 of them competing while five observing.

Held in the UAE's Year of Tolerance, the World Games attach great importance to the values of inclusivity, unity and respect. Over 2,500 female athletes, the largest number ever, will step on the court. Saudi Arabia will send female athletes for the first time in history.

Over 20,000 registered to assist people in need, making it the largest volunteer program ever in the Middle East and North Africa. 500,000 audience members will cheer for the athletes in nine world-class venues in Abu Dhabi and Dubai.

First held in 1968 in Chicago, the World Games is now held every two years, alternating between summer and winter Games. Approximately 7,500 athletes, over 3,000 coaches and 1,500 referees will be in 24 sports of the first Special Olympic World Games to be held in the Middle East.

This is the ninth time for China to send a delegation to summer Special Olympic World Games. 104 athletes will take part in 10 sports including athletics, swimming and football.

The 2019 edition will also feature a range of non-sports initiatives such as Healthy Athletes, an Inclusive Art Exhibition, Play & Live Unified activities, the Stand Up for Inclusion concert, and the Global Youth Leadership Summit.