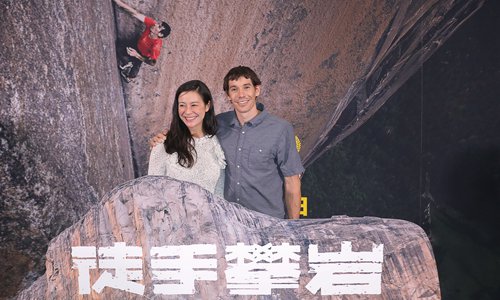 Wearing a light gray shirt, khaki pants and a pair of climbing shoes, Alex Honnold, the hero in the Oscar-winning documentary Free Solo, looked more like a thoughtful scholar than a rock climbing athlete.

His great accomplishment of free soloing the 914-meter sheer granite rock formation known as El Capitan didn't seem to leave a single sign of pride in him. Located in the US' scenic Yosemite National Park, the steep El Capitan is an absolute challenge to most professional rock climbers even when using equipment. Honnold, however, successfully reached the top in just four hours without the use of any safety equipment.

Free Solo, directed by Elizabeth Chai Vasarhelyi and her husband and directing partner Jimmy Chin, is set to bring Honnold's exciting journey up the imposing cliff face to Chinese mainland theaters on Sunday.

Honnold and Vasarhelyi attended the premiere and other promotional events in Beijing on Friday and Saturday.

At the premiere, Vasarhelyi, who is Chinese-American, told media that watching the Chinese audiences' reaction to the documentary was a wonderful feeling.

Before becoming the first person to free solo El Capitan in 2017, Honnold also set other records such as ascending the Half Dome in Yosemite Valley in 2012 and El Sendero Lumioso in Mexico in 2014.

Also a professional climber, Chin has been friends with Honnold for many years. Vasarhelyi told the Global Times that she heard stories from her husband that Honnold feared almost everything when he was a kid, never hugging anybody, seldom talking to anyone and even being afraid of vegetables, a sharp contrast to his current profession which requires a huge amount of courage.

During his first year studying civil engineering at Berkeley, he dropped out and set foot on a journey to become a professional rock climber. For about a decade, he lived in a Ford van and lived a nomadic life.

In order to prepare for his final climb, Honnold spent over two years practicing climbing the pitches of the freerider route on El Capitan. At the event, he noted that he woke up early most days and trained a lot.

Vasarhelyi said she hopes the audience can understand "it's okay to be scared. But it's also okay to be who you are and try to expand and move through fear." As shown in the documentary, Honnold failed many times in his climbing career, but he has continued going on because of his passion for the sport.

According to Vasarhelyi, the film poses a question to the audience, asking them if the life they are living is what they really want and what it takes to live their dreams.

Due to its high level of difficulty, El Capitan holds a very important position in rock climbing culture and history. Although there are more than 100 routes on this holy rock, no single one can be conquered easily. On the route Honnold chose, the handholds and footholds are only as wide as a young girl's little finger. There are also cracks and crevices that require climbers stick their hands and feet in as firm as possible to cling to the rock and move upward.

The most difficult part is a spot they call the Boulder Problem, a small turning curve of the granite wall. Honnold planned two ways to get through - either jumping over it with hands and feet leaving the rock at the same time or kicking his left leg straight and putting his weight on it while moving cautiously to the side.

To minimize distractions, the crew decided shoot from a remote location while Honnold climbed through this section.

The challenge of the climb wasn't Honnold's alone, but also the whole film crew.

"What Alex did was what everyone else did," said Vasarhelyi.

The crew needed to carry all the film equipment and ropes to El Capitan during the shoot. All the cameramen were leading professional climbers who knew exactly what Honnold was doing and therefore were more able to avoid distracting him.

"Even more scary than that was the ethical issues surrounding the shoot. The kind of fundamental question is that is Alex more likely to fall if we're filming him, and can we live with that," Vasarhelyi noted.

This is a daunting question that hung over the crew's head throughout the shoot.

Vasarhelyi noted that their respect for Honnold and his abilities was what allowed them to continue. Respect is the doctrine for filming any subject. They trusted he had a full estimation of the risks and knew how to use strategies to minimize those risks. All they could do was to take a neutral stance when it came to Honnold's decisions.

The crew knew there were many different kinds of films they could make about Honnold's climb, such as something very sensationalistic, but they chose to do a documentary to record Honnold's real life and pay him respect.

The documentary doesn't just record the climb itself but also Honnold's intimate relationship with his girlfriend and his climbing friends' opinions of him.

Vasarhelyi said the most meaningful thing for them was the fact that Honnold survived the climb and successfully free soloed El Capitan. The awards and even the audiences' appreciation of the film were just bonuses.