Action stepped up to curb improper pursuit of pop stars 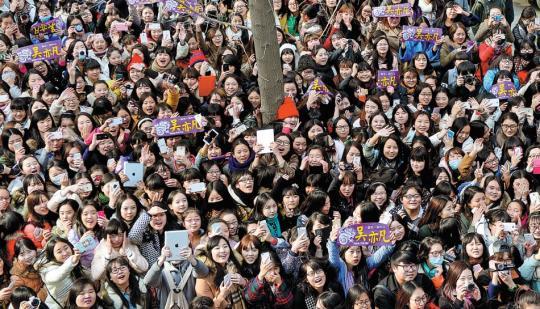 Fans gather for an appearance by pop star Kris Wu at a promotion event in Chengdu, Sichuan Province, in December 2014. (Photos: China Daily)

Lin Jia lost count of how many bottles of yogurt she bought to support talent show contestant Xia Zhiguang two years ago.

Viewers of the online program Chuang 2019, produced by Tencent, one of China's largest internet enterprises, voted for their favorite contestants by buying yogurt and scanning QR codes on the bottle.

The more votes a competitor received, the bigger chance he had of winning the show and becoming a member of a boyband.

Lin, 23, using an assumed name to protect her privacy, said: "I didn't want Xia to lose. I was willing to help him make his dream come true, so I used my pocket money to buy the yogurt."

The dormitory Lin used at her college was filled with boxes of yogurt, "as I thought my idol needed me and that I could help him improve", she said.

Lin followed the show from April to June 2019, continually voting for the good-looking Xia and either consuming the yogurt on her own or with her roommates. She was excited when Xia stood out among the 101 competitors and debuted as a member of the 11-strong pop band R1SE at the end of the program.

However, she said she quickly became disappointed with the 21-year-old star, who has more than 10 million followers on Sina Weibo.

"I found he had been seen hanging out with a rumored girlfriend after he joined the group, instead of paying more attention to his singing, dancing and acting career. This was different from the hardworking image he portrayed to audiences during the show," she said.

"I felt sad－it was like being cheated. My efforts in helping him promote his career seemed to have been in vain, so I stopped following him," she said.

Recalling the time she spent pursuing Xia and buying the yogurt to help him, she added: "I was irrational. It wasn't worth it."

Lin's behavior is typical in fan quan, or "fan circles", which are highly organized groups of passionate, loyal supporters who share information about their idols and voluntarily use their time, money and expertise to make these performers－usually budding pop singers or actors－as popular and influential as possible.

Fan circle members are mostly girls and young women born after 1995, and their numbers have grown in recent years.

According to a report issued by the China Internet Network Information Center last month, about 8 percent of the country's 183 million netizens under age 18 pursue celebrities, and most of them are middle school students.

Supporters' activities and the rise of fan circles have played a key role in driving the entertainment industry, but they have also triggered controversy.

A teacher from a Beijing high school, who wanted to be named only as Sun, said, "The phenomenon of supporting idols is understandable because it meets teenagers' psychological needs for socializing and self-realization.

"There is nothing wrong with young people chasing stars, but some irrational behavior, which is sometimes incited by adults or internet platforms, should be halted," she said.

For example, some obsessive fans reportedly stole their parents' credit cards to buy products endorsed by their idols, or raised money to pay to vote to increase the stars' popularity. 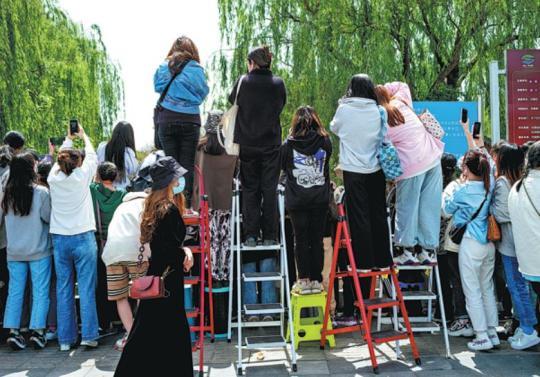 Some fans use stepladders to photograph a celebrity in Jinan, Shandong Province, in April.

The irrational pursuit of stars attracted government attention after a particular incident shocked the nation.

During the five-day May Day holiday this year, video footage showing a group of young people pouring milk down drains to support their idols in a talent show went viral on Chinese social media platforms.

The fans merely wanted the bottle caps that had a QR code printed on the inside.

By scanning the code, which represented a ballot, they could vote for contestants on Youth With You Season 3, one of the country's most-viewed reality shows, to help competitors be standout performers and form a pop band.

Some young followers who bought more milk than they could drink just scanned the codes before dumping the bottles.

Footage of the "milk incident "enraged the public and sparked action by the authorities.

On May 10, the Beijing Municipal Radio and Television Bureau said it was strengthening the regulation and supervision of online reality shows. It said talent programs should be prohibited from obtaining votes through improper means, including raising money and group funding.

The Cyberspace Administration of China, the country's top internet watchdog, also pledged to make greater efforts to combat those who lure young people to follow stars irrationally, and to harshly punish online platforms that allow such behavior.

As the "milk incident" made headlines, iQiyi, the internet platform on which the show appeared, and Mengniu, the dairy company involved in the promotion, apologized to the public. The program was also canceled.

Zhao Zhanling, a legal adviser for the Internet Society of China, said the incident was closely linked to the show's financing. He added that the problem of irrationally supporting pop idols has arisen frequently because some online platforms or entertainment agents benefit from such improper activities.

He said talent shows appeared to give fans the power to decide contest winners, "but in essence, it was about the program producer, the platform and the sponsors making money". Zhao added that this was why teenagers, without a strong ability to identify promotional activities, were easily manipulated in such circumstances.

"As a result, the targets of our efforts should be the marketing or promotional web accounts that encourage fans to slander or support stars by posting or deleting online comments, and also organizers who lure or manipulate fans to take part in irrational activities to increase online views and make profits."

In addition, internet platforms that allow such irregularities should be punished, Zhao said.

After the "milk incident", the China Association of Performing Arts issued a notice warning players in the industry against raising money from fans for commercial purposes.

While intensifying efforts to inspect online platforms and combat those who lure young people into irrationally supporting idols, the authorities said the entertainment industry must also be urgently regulated following the detention of pop star Kris Wu on suspicion of rape at the end of last month.

On July 31, police in Beijing's Chaoyang district said in a statement on Sina Weibo that they had placed a 30-year-old Canadian man surnamed Wu under investigation after he was accused of tricking young women into having sex.

Many Chinese media outlets confirmed that the man was Wu, one of China's most high-profile celebrities who had more than 50 million followers on Sina Weibo.

As numerous people followed the ongoing investigation into Wu, screenshots of the star's fans' groups made headlines. In online chats, some of Wu's followers discussed whether to raise money to save him, or if they could visit him in detention.

This irrational talk caused widespread shock and also accelerated steps by the authorities to regulate celebrities and the entertainment industry.

Last week, associations in the television, film and music industries published notifications, clarifying that celebrities must abide by laws and ethical standards and devote more energy to their work.

The associations called for those working in the entertainment business to be much stricter with themselves as public figures and to set a good example for young people. The China TV Artist Association also said, "No one has the privilege to do whatever they want, no matter how much support they get from fans or how many online views they attract."

On Wednesday, the National Radio and Television Administration said it would carry out a one-month operation involving online variety shows in an attempt to curb the irrational worship of celebrities and misconduct committed while supporting stars.

It said idol-related reality shows would be its main supervision target, adding that it would strictly scrutinize the voting rules for such shows.

In June, the Cyberspace Administration of China launched a nationwide campaign against irrational or improper behavior in following celebrities and also to "purify" the online environment.

Zhang Yongjun, head of the administration's network comprehensive management, said it had made the control of star-chasing behavior online a priority this year, "as irregularities such as irrational voting rules and funding represent not only unrestrained pursuit of idols by fans, but also the connivance of internet platforms".

He said he understood why fans chased stars, but added that pursuing them without a "bottom line" is a problem.

Zhang said online platforms that indulge irrational activities and refuse to correct their behavior despite repeated criticism should be harshly punished.

On Aug 2, the administration said the ongoing campaign had made progress, with the removal of more than 150,000 items of harmful information and over 1,300 online chat groups for inciting netizens to follow stars irrationally.

More than 4,000 online accounts and 814 online topics that purportedly misled people into supporting stars improperly have also been closed, it said, adding that 39 mini programs suspected of either improperly raising funds or attracting online views had been shut down.

Since the campaign began, several internet platforms have said they support it and have started to clean up improper behavior.

For example, Sina Weibo has banned the use of words such as "gossip" or "onlooker" in users' nicknames when they register web accounts, and has also strengthened supervision of posts involving entertainment idols. The platform regularly publishes reports exposing accounts that ignore its rules, and publicly announces the measures it will take to keep order online.

In a report published last week, the platform said that since May it had cleaned up nearly 20,000 posts in which fans supported idols by arguing with each other. It deleted 2,642 web accounts, 2,503 topics and 922 chat groups due to irrational activities.

It pledged to further inspect and remove "star-chasing misconduct "and called for users to follow celebrities and take part in related online discussions in a civilized manner.

The Cyberspace Administration of China also urged internet platforms, including Sina Weibo, to upgrade their services and products to prevent those under 18 from supporting idols irrationally, adding that it is looking into setting up a long-term mechanism to regulate such online behavior.

On Friday, Sina Weibo said it had decided to remove its ranking list of celebrities before upgrading its service, as some fan groups use the platform to irrationally support idols. The ranking list was established in 2014, with the aim of showing how popular and influential a star was.

The platform said it would invite a third party to comprehensively evaluate the influence of stars in order to prevent fans irrationally chasing them by raising money or controlling online posts. It also said it would encourage stars to take part in public welfare.