Environmental campaigners have filed an unprecedented lawsuit in a bid to halt the so-called "drive hunting" of dolphins in Japan, arguing the practice is cruel and illegal. 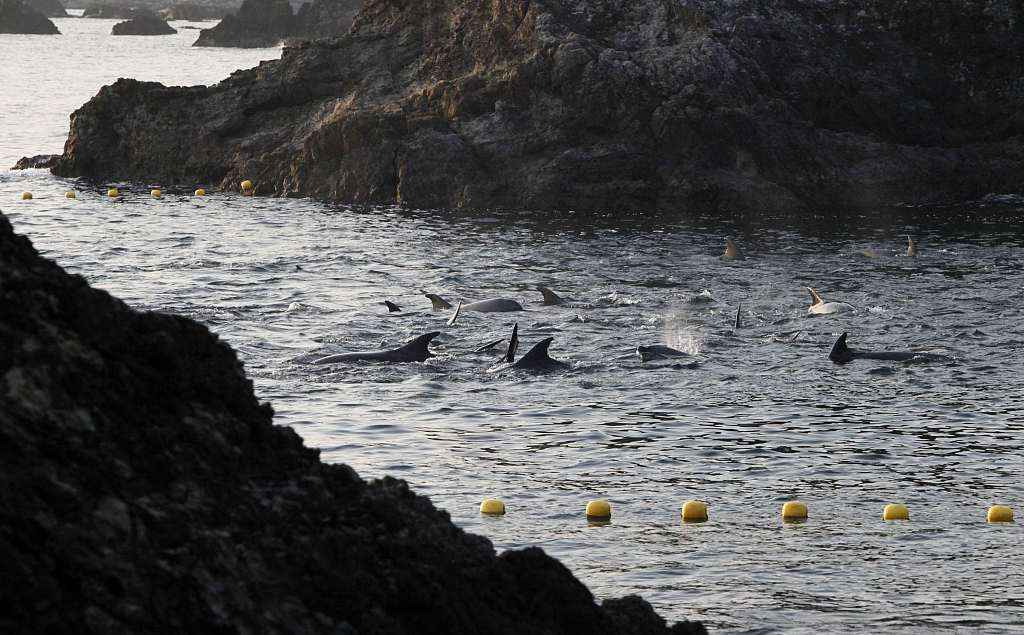 Dolphins are seen at a cove in Taiji, western Japan, January 21, 2014. Japanese fishermen drove a large group of dolphins into the shallows and killed at least 30. (File photo: VCG)

In drive hunting, fishermen force dolphins into a cove by beating on boats to disorient them. The panicked animals often get tangled in nets, suffocate and drown.

Activists say some dolphins smash into rocks and die of injuries, while others are killed by fishermen who thrust a long metal rod repeatedly into the body just behind the blowhole to damage the spinal cord.

In the suit filed last week, the plaintiffs are demanding the governor of western Wakayama prefecture revoke a three-year drive hunting permit in the port town of Taiji.

The practice was filmed in the 2009 Oscar-winning documentary "The Cove", which sparked controversy when it thrust the annual hunt into the global spotlight.

Many in Japan felt it unfairly targeted the town's fishing community, but others were horrified by the disturbing footage.

The lawsuit is the first-ever legal challenge to the hunt in Taiji, according to a lawyer involved in the filing.

It argues that the hunting method violates Japan's animal welfare act, which stipulates animals shall not be abused or killed unnecessarily and that -- when they must be killed -- their pain must be minimised.

"Many Japanese see dolphins as fish and mistakenly believe the animal welfare act does not apply to them," said Ren Yabuki, head of an environmental NGO, who brought the action along with a Taiji resident who asked for anonymity.

"I've seen many times that half-killed dolphins are taken away on small boats, thrashing about in pain," Yabuki said, adding it can take dozens of minutes for the animals to die.

The suit challenges the way the hunt is carried out, rather then all kinds of dolphin hunting.

It also claims fishermen are catching more dolphins than allowed by legal caps.

No immediate comment was available from Wakayama officials on the lawsuit.

Dolphins are traditionally caught for meat in Japan, and defenders of the hunt say it is an important part of local culture and point out that dolphins are not endangered.

Japan has strongly defended its hunting of dolphins and whales, a rare piece of provocative diplomacy for the country, which has generally pursued an uncontroversial foreign policy since its World War II defeat.

It sparked outrage in December when it decided to withdraw from the International Whaling Commission, saying it would return to commercial whaling as part of its cultural heritage.