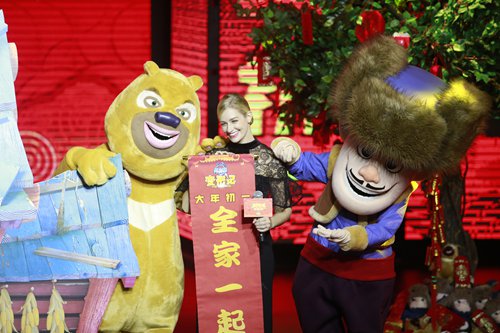 The Boonie Bears franchise is one of the biggest animated series in China. While the show got its start as a TV series in the Chinese mainland, it made the leap to film with Boonie Bears: To the Rescue, which debuted during the Spring Festival in 2014. Since then it has become somewhat of a tradition for a Boonie Bears film to come to Chinese theaters every Chinese New Year. So far the first four films have earned a total of 1.35 billion yuan ($213 million) in China.  This year, the fifth entry in the film franchise, Boonie Bears: The Big Shrink, is looking to add a little bit of international flavor with the introduction of a new character from the US: Beth. According to the animators, the new character is based on the likeness of actress Beth Behrs of 2 Broke Girls fame, which is probably why Behrs has been brought in to voice the character for the English dub of the film, in addition to being the movie's international ambassador.  Set for a nationwide release on February 16, the first day of the Chinese New Year, The Big Shrink follows the adventures of two bears - Briar and Bramble - and a logger named Vick after they are shrunk down to a mere few centimeters in height. Since the major theme of the Boonie Bears franchise has always been environmental protection, the character based on Behrs is a foreign environmentalist who is conducting research in China."It's so cool to see a character who looks like me but in animation and also believes in the same things about saving the environment, being brave, helping her friends and all those things," Behrs told the Global Times on Wednesday at a media event for the film in Beijing. "I really like the heartwarming story about that kid and his dad, and how it's all about family, what family means," she added, referring to how the film fills in Vick's family background, something which remained vague in early TV and film works. "We want to raise people's awareness that parents are an irreplaceable part of a child's growing up," Ding Liang, general director of the franchise, told the Global Times.He explained that this message was of particular importance in China today, as many busy parents leave child raising to the TV. Having already established  a reputation for the franchise in China, the producers of Boonie Bears have already started turning their attention to the overseas market, where the show possibly has a better chance of succeeding than a Chinese live action show since audiences have an easier time identifying with animated characters.   Ding explained that versions of the show are already being shown on Sony and Disney channels in English, Russian, Tamil and Hindi, while the films have hit theaters in Italy, South Korea, Russia and Turkey. "I was surprised to hear that Russian audiences are particularly fond of our Boonie Bears. Maybe it is because they are interested in anything about bears," Ding joked.