Iceland's heroes have plenty of irons in the fire

A Coca-Cola advertisement recently caused a stir on Chinese social media - but not because of its content. The reason for the ad's popularity is the surprising identity of its director - Iceland goalkeeping hero Hannes Halldorsson. 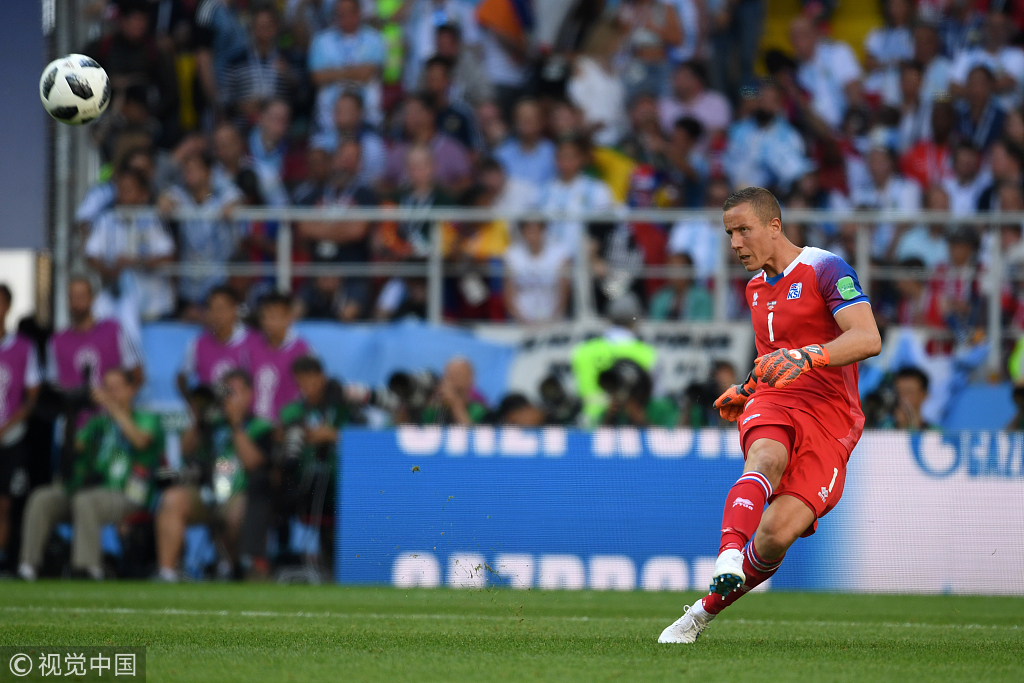 Hannes Halldorsson of Iceland in action during the 2018 FIFA World Cup Russia group D match between Argentina and Iceland at Spartak Stadium on June 16, 2018 in Moscow, Russia.  (Photo: VCG)

The 34-year-old became a household name overnight after saving a Lionel Messi penalty to help Iceland to a 1-1 draw against Argentina in its finals debut.

Before turning pro, Halldorsson worked as a filmmaker, and after the match his cola ad was reposted over 10,000 times on Weibo, with many users expressing astonishment that a shot stopper was calling the shots.

Social media was soon awash with claims that the Icelanders are part-timers, an inaccuracy Iceland Ambassador Gunnar Snorri Gunnarsson was keen to clear up.

"But they are always ready to go back to normal life. They keep open to a second career. Because the career of a football player is short, so you have to prepare for life after that."

Halldorsson, who plies his trade on the pitch for Danish top-flight side Randers, is not alone in his multi-tasking.

Albert Gudmundsson, the first ever pro from Iceland who played for the likes of Arsenal, Nice and AC Milan in the 1940s and 50s, excelled in the import/export trade and later became the country's ambassador to France.

Another example is Football Association of Iceland president Gudni Bergsson, who played for Tottenham Hotspur and Bolton Wanderers during the 1980s and '90s but still found the time to study law in England.

These multifaceted players, known as Strakamir Okkar ("our boys") in Icelandic, first came to global attention at the 2016 European Championship, the country's major-tournament debut.

Spearheaded by gifted midfielder Gylfi Sigurdsson, now with Everton, Iceland reached the knockout stage where it stunned England 2-1 before losing 5-2 to host France in the quarterfinals.

"Iceland does not have a very hospitable climate. It's very difficult to play in winter. But we have built quite a few indoor football fields so that people now can also train in the winter time," he explained.

Gunnarsson added that Iceland now has 179 full-size pitches - one for every 1,800 people or for every 128 registered players.

Importantly, most of these pitches were built near schools.

"Youth work is exactly the key and we have set up a system so that even the kids, boys or girls, who want to play football can have a professional coach to help them," he said. "At a young age, you can have professional guidance."

The products of that winning formula are now writing their own history in Russia, with expectations rising they can repeat their 2016 feat.

Knockout stage or not, the players are already national heroes.

"They are sure to get a warm welcome when they come home, no matter what happens because everyone is just so happy that we are, for the first time, in the World Cup," said Gunnarsson, who remembers the heartache of Iceland's 2014 qualification hopes being crushed by Croatia in a two-legged playoff.

"It's a long time waiting. There is a big poster at Reykjavik Airport saying: 'We have been waiting for the World Cup since 1947'."