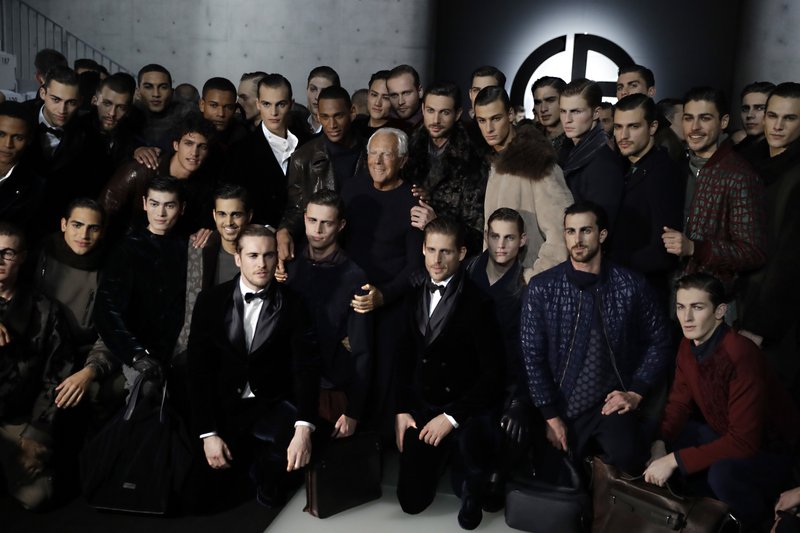 And in a flash, it was over. The Milan Fashion Week typically devoted to fall and winter menswear was abbreviated this year into a super-slim long weekend that ended Monday.

Many fashion houses opted to fold their designs for men into their womenswear shows scheduled for next month. Others decided to go with more hands-on presentations instead of all-out runway productions.

Some of the designers who participated in the condensed men’s week mixed women’s clothes in with their predominantly male displays. But the final day stuck strictly to menswear, with Armani, Fendi and No. 21 closing out the previews.

Here are some highlights:

As with his youthful Emporio Armani line shown Saturday, Armani employed velvet generously in his main line. Velvet is the textile of princes, the designer noted after the show, tracing its popularity as far back as the 15th century. Armani’s suits were both formal and casual.

Formal double-breasted looks made a comeback, in shirts and knitwear as well as suit jackets. . For Armani, “the double-breasted construction is beautiful, because it does it all,” whereas a more common single button jacket requires a vest or a fancy shirt and tie to finish the look.

“You need to compensate for the lack of buttons with other elements,” he advised.

Armani also created a new shirt with a collar that can be configured into manifold shapes courtesy of hidden metallic thread. The white shirts on the runway contrasted elegantly with darker tones and were worn either high, rolled up or scrunched down, out of sight.

Armani said he sought to make “sporty looks more sophisticated” and to add a “touch of sportiness to the evening.”

Silvia Venturini Fendi took a journey to the family fashion house’s past for next winter’s menswear and found herself at a fantastical airport carousel.

Bags of every sort and even a fur-covered baby bassinet sped by on a conveyor belt as models strode by. Fanciful accessories had a strong role to play in the collection, from fur-covered safari hats to plasticized rain hats and Fendi-branded umbrella-shaped caps.

The collection had a feel both contemporary and nostalgic. Brown and gold were the main colors, and the silhouettes veered toward relaxed, roomy cuts.

Diagonal detailing characterized the season, appearing on fur coats, down jackets, and matching silken shirt-and-tie sets. The print of the season, a collaboration with the artist-designer who goes by @hey_reilly, was a collage of plaids, architectural detailing and the double-F Fendi logo applied to some of the catchwords of the season, including “Freedom.”