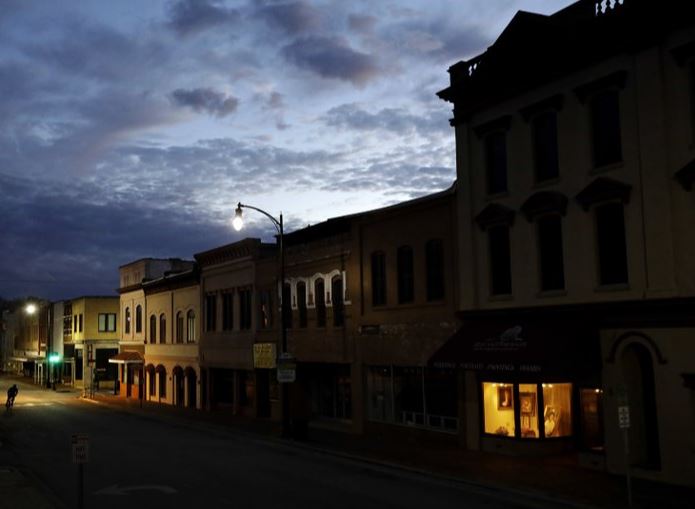 Storefront window of a portrait studio is lit up along a downtown street at dusk in Lumberton, NC. (File photo: AP)

The Trump administration is proposing changes to a decades-old law designed to keep banks from discriminating against the poor and disadvantaged, but critics argue the changes could make it easier for banks to potentially ignore under-served communities.

The Community Reinvestment Act has over the past four decades spurred hundreds of billions of dollars in lending to low- and middle-income communities. But it’s out of date and in need of an overhaul.

Some community advocates say the changes the administration is proposing will allow banks to meet the law’s criteria without making the types of loans that are most beneficial to the communities they serve. Worse, critics argue that discrimination against poor and communities of color by the banking industry could increase under the proposal.

The Community Reinvestment Act was passed in 1977, when bank branches were one of the few ways to measure a bank’s presence in a community, and last revised in the mid-1990s, when online banking barely existed. In addition, the law rewards banks that make mortgages and small business loans in their communities but is murky about what other types of loans or activities can count as “community reinvestment.” Bankers, regulators and activists alike have all called for an overhaul.

The Trump proposal aims to broaden the definition of what constitutes a bank’s community — taking into account that online banking now exists — while broadening the types of loans and services that would qualify under CRA. Under the administration’s new proposal, banks could get credit for other types of lending to low-income customers like credit cards and personal loans — a move that would greatly benefit the largest of the country’s banks because they already dominate these lines of business.

The regulations would also give banks credit, under certain circumstances, for loans they make to build or improve facilities such as sports stadiums and hospitals.

It’s the broadening of what would qualify under CRA that has community groups upset.

“We all agree there needed to be a list. The problem is what the OCC has put on that list,” said Jesse Van Tol, CEO of the National Community Reinvestment Coalition, an umbrella group for dozens of community groups who try to get banks to do more work in low-income neighborhoods.

Joseph Otting, the Comptroller of the Currency, took heat from Congressional Democrats on Wednesday during a scheduled appearance before the House Financial Services Committee. A significant number of the Democrats on the committee are black, including Chairwoman Maxine Waters, and consider CRA to be a critical tool to help black and minority communities.

“CRA was, and still is, a Civil Rights bill,” said Rep. Gregory Meeks, D-New York. “Your proposal would undermine that.”

The OCC regulates the banking industry along with the Federal Reserve and the Federal Deposit Insurance Corporation.