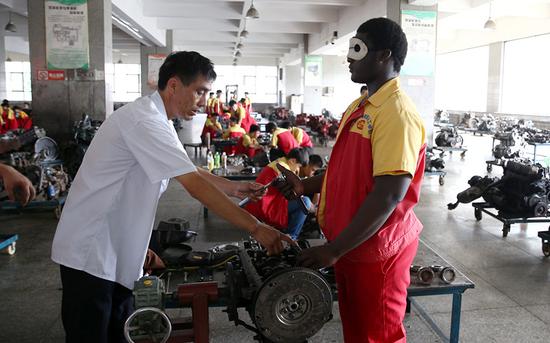 Wearing a blindfold, Liu Yang felt his way around a motor engine, searching for the heads of screws.

He asked a classmate to hand him the tools he needed and then swiftly removed the screws before dismantling the engine part by part, a task he completed in just 20 minutes.

Liu is not only skilled in this area. His language fluency could give the impression that he is a native Chinese. But he is from Africa, and is the first foreign student at Lanxiang Senior Technical School.

The Ghanaian, whose real name is Sergio Cosby Thompson, enrolled at the school on the recommendation of his architect father, who heard about the institution during a three-month visit to China in 2009.

Liu said he chose to learn motor repairs at the suggestion of his father and a Chinese friend, surnamed Ding, who helped him enroll at the school. Ding travels regularly between China and Ghana, where she runs a motorcycle business. She is also a good friend of Liu's father.

"I was in grade one in senior high school and didn't have any plans about what to learn. I like motors very much and wanted to give this a try," Liu said, adding that he now feels "good" about his major.

He did not speak a word of Chinese before arriving in the country, turning to an electronic dictionary for translations when communicating with classmates and teachers. However, after just three months he had managed to speak some Chinese.

He also bought a second hand mahjong table after learning from classmates that the tile-based game is part of Chinese culture. "I later gave it up, as I found it too complicated and also because we are busy with studies," he said.

He then tried his hand at the popular card game dou di zhu, which translates as "battling the landlords", to become further involved in the campus community. "I kind of know how to play the game now," Liu said.

The food he ate also took a little getting used to. "In China, we eat vegetables more often. In Ghana, however, we mainly eat meat," he said, adding that he had no choice initially but to eat a lot of rice and the few vegetables that he was familiar with, including broccoli and potatoes.

Now, he likes all Chinese food, and often visits restaurants with his classmates during his day off on Sundays.

Liu has not returned to his homeland since arriving in China. During holidays, he visits Ding's home in Linyi, about 250 kilometers from Jinan.

He has yet to decide whether to stay in the country or return to Ghana after graduating next year.

He may start his own auto repair shop back home, but has also been thinking about staying and working in China.

"People in my hometown are very warm-hearted. Here, people are even more warm-hearted," he said.