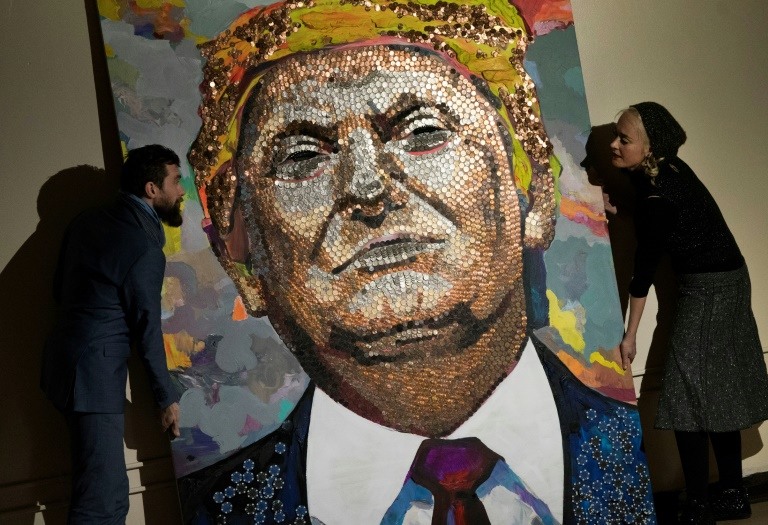 They shot to fame in 2015 with a portrait of Vladimir Putin made of bullet shells from the killing fields of eastern Ukraine. Now, the two Ukrainian artists are back with a portrait of Donald Trump made from coins and poker chips.

Threats forced Daria Marchenko, 35, and Daniel Green, 34, to leave their homeland in November 2016. They now lead an itinerant life, traveling and exhibiting their work in the United States and Latin America.

The Trump portrait, finished one month ago, is made of nearly 4,000 one cent and five-cent pieces. Poker chips are used for the US president's shoulders.

The artists are now searching for a place for a public unveiling.

As with their "Face of War" portrait of the Russian leader, the Trump version, called "Face of Money" plays in the light revealing different expressions. Marchenko's favorite? The one in which "he is very proud of himself," she tells AFP in New York. 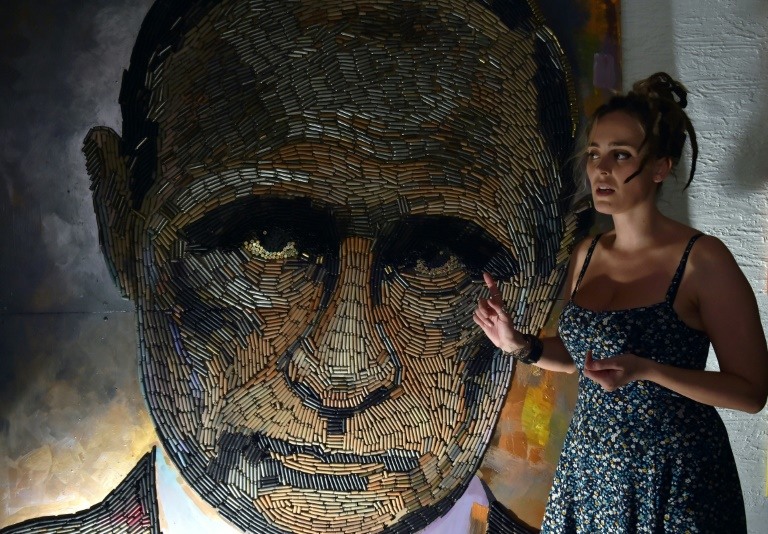 They came up with the idea of the enormous portrait -- nearly eight foot by five foot (2.4 meters by 1.7 meters) -- last summer when Putin ordered the United States to reduce its diplomatic footprint in Russia by 755 employees.

Trump responded by thanking Putin, saying it would allow the United States to cut down its payroll and "save a lot of money."

"I thought, 'oh my God, you are so cheap, how can you be American president'?" says Green. "At that moment, I thought coins is the best way to show his portrait."

The duo deliberately chose one cent and five-cent pieces, the smallest denominations of US currency, to illustrate their point, Green explains.

Coins darkened with fire are used for the pupils, eyebrows and to emphasize the chin.

The poker chips are a nod to the casinos the billionaire once ran in Atlantic City, New Jersey -- but also, in Green's words, to his brand of international diplomacy.

"He does international politics like he's playing. Sometimes he wins, sometimes he loses big," says the artist. 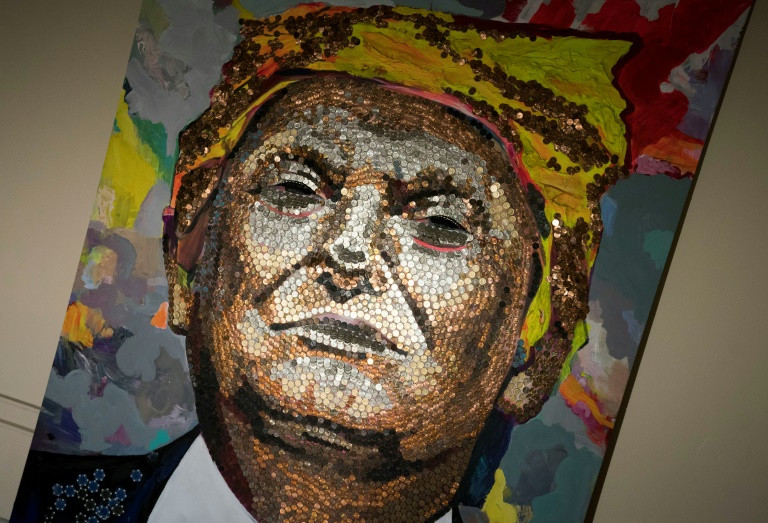 Green singles out the US president's announcement in December that he was recognizing Jerusalem as the capital of Israel, and preparing to relocate the US embassy from Tel Aviv.

"When only eight countries follow you, it shows America has lost all power," he says.

The artists left Ukraine following the backlash over their Putin portrait, and after a kidnap attempt against Marchenko.

"We had threats by email. When you are walking on the street, somebody comes to you and tells you something," says Marchenko, her dreadlocks tucked into a beanie.

"Mostly not direct threats but 'Guys, don't hurry to create... be in a hurry to leave," she carries on. "We became tired of this. Morally it was very difficult. So we left."

But the Trump portrait isn't making things easier for them.

They offered it for exhibition at New York's Ukrainian Art Institute of America, which is already exhibiting their work on Putin and the war in Ukraine.

The institute however was reluctant "to make waves," between Kiev and Washington, Green said.

The two artists now hope to show their Putin and Trump portraits together, perhaps in Las Vegas, Los Angeles or San Francisco.

"They will be face-to-face, they will have a dialogue," says Marchenko dryly.

She and Green, who both took part in the pro-European uprising of 2013-14, now consider themselves political refugees without a fixed home, traveling in the United States and Latin America at the invitation of benefactors.

Their next project is a portrait of Ukrainian President Petro Poroshenko, even if that could complicate their return one day to Ukraine, Marchenko says.

For Poroshenko's portrait the artists may use chocolate wrappers -- a reference to the chocolate company where he made his fortune.