CULTURE After the birds have flown

After the birds have flown 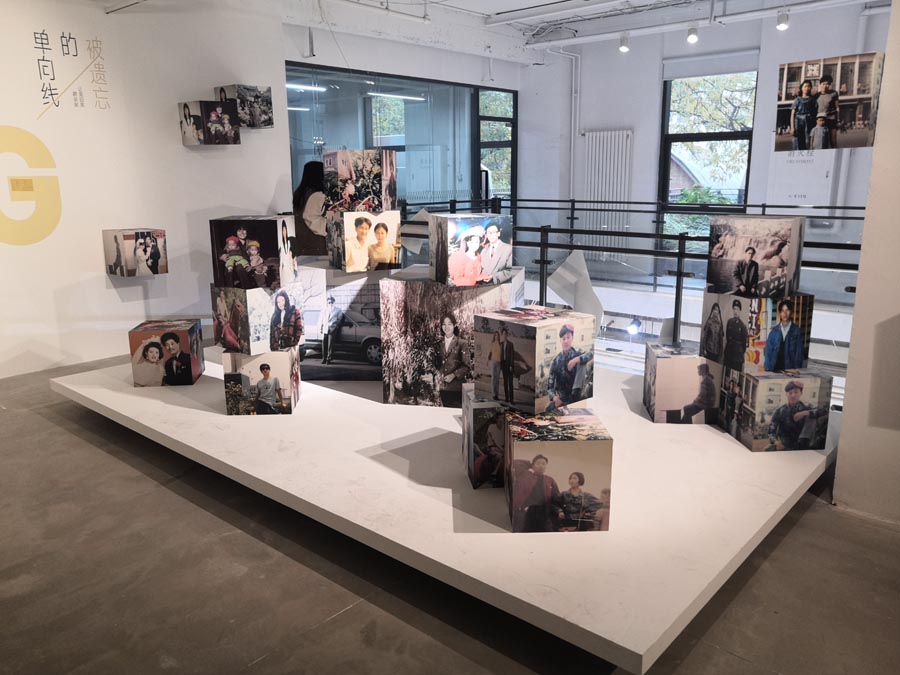 A new exhibition in Beijing examines the experience of China's millions of empty-nesters, and the sense of loss they feel when their children inevitably leave home.

On an old-fashioned desk, sits a lamp and a photo album. More photos cover the wall behind the desk, forming the shape of an inverted triangle - as if they have just flown out of the pages.

These photos document the formative years of scores of internet users' parents, and they also mark the start of an exhibition which calls on people to spare a thought for China's empty-nesters - the parents whose children have long since left home.

Held by the charitable Tomorrow Foundation and initiated by actor Huang Xiaoming at the Dachin Contemporary Art Center, the exhibition Forgotten One-way Line opened in Beijing on Nov 9, and will run until Dec 9.

Speaking about the title of the exhibition, Huang says: "From the time we are born onward, we witness our parents getting older. And the process can never be stopped or paused, since time is a one-way line. But this fact is often forgotten by many people."

According to Gao Xiaoqi, director of the Dachin Contemporary Art Center, who is also the curator of this exhibition, "Empty-nesters are a common social phenomenon. But many young people haven't realized their parents are actually empty-nesters. The exhibition doesn't show many true stories, but it focuses on the image of the whole empty-nester group.

"We don't want to place a burden on the viewers when they visit the exhibition, but we do aim to make them feel how their parents felt when their children left home," she adds.

One highlight of the exhibition is a long, narrow projection room designed by Huang. In the front of the 9.6 meter-long room, there is an old television broadcasting scenes from old family dramas. A chair has been set up at a point far from the TV so that viewers will find the images hazy and the sound unclear. Lines from famous films and dramas are projected onto the walls describing the complexity of the parent-child relationship.

"The long and narrow space, together with the changing light created by an osram lamp and the background sounds, makes people feel the loneliness of the empty-nesters. The position of the chair was carefully chosen to make the viewers feel like old people watching TV," says Gao.

The exhibition is more of an immersive experience rather than simply a gallery to view exhibits. In another area, visitors can put on earphones and listen to some impressive passages describing the parent-child relationship performed by ten stars, including Huang Bo, Guan Xiaotong, Wang Han and Zhao Wei, who are also friends of Huang.

Many visitors were touched by the line: "I only noticed I stayed at home for 15 days every year, but I didn't realize from my parents' eyes that I had been away from home for 20 years," actress Kong Wei recites.

"It was really touching, and it made me realize that I am really important to my parents. All I wanted to do after listening to it was to go back home and spend more time with them," says Sina Weibo user Zhuizhumengli, a visitor to the exhibition.

Visitors can get a sense of what it is like to grow old when they enter an eight-meter-long corridor at the exhibition. As they move forward, they have to increasingly bend and lower their heads, and will find it more and more difficult to walk because of the design of the corridor floor.

The final section has an arched wall on which viewers can see positive words like "time", "parents", "brothers", "health" and "warmth" sinking down out of sight. When people reach out and try to stop them from sinking, words like "love" will pause, but others like "time" just fade away.

"Although you cannot stop the passage of time, you can focus on many other things in life like love," says Gao.

According to the exhibition, China has over 249 million people above the age of 60, among which half are considered to be empty-nesters.

"The phenomenon of empty-nesters is quite a challenge since old people's needs are not necessarily money or other material reliefs. Although many old people have friends and hobbies, they still need their children's love and attention." says Huang.

"Yet, while it's impossible to ask young people to go back home and stay with their parents, we just wanted to raise their awareness of caring for their parents through this exhibition," says Gao.