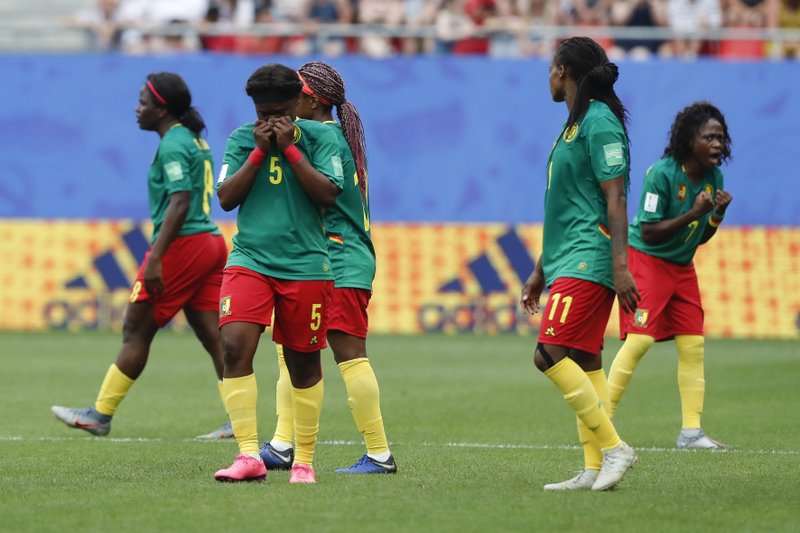 Cameroon players react after a VAR decision that ruled out Cameroon's Ajara Nchout's goal for offside during the Women's World Cup round of 16 soccer match between England and Cameroon at the Stade du Hainaut stadium in Valenciennes, France, Sunday, June 23, 2019. (Photo: AP)

After all the rage and rebellion in the stadium, England players received a far more convivial reception back at their hotel they shared with Cameroon.

It came remarkably from Cameroon supporters who were far more graceful than some of their dissenting national team players earlier on Sunday evening in the humid cauldron of Stade de Hainaut.

England players who had denied their country a place in the Women’s World Cup quarterfinals by winning 3-0 were applauded back into the Royal Hainaut Spa and Resort Hotel.

The manager had concerns the moment he was informed by the team operations manager that they were sharing with the opposition in the small city of Valenciennes.

“I thought, ‘No, that’s not right,’” Neville said. “Then we went to hotel and it’s been amazing. We saw them go out to training (on Saturday) and they had a ghetto blaster and the kit man went out singing and dancing.

“My players joined in dancing in the corridors. Our meal and meeting rooms were side by side. That’s the spirit of football.”

But what unfolded on Sunday in the last-16 game was far from the “carnival atmosphere” Neville enjoyed the previous day in the newly opened hotel on a site of a former hospital.

By revolting against VAR decisions and contemplating not resuming play, the Cameroon players left Neville “completely and utterly ashamed.”

The Cameroonians were convinced of a plot against them by the refereeing team.

In the dressing room at halftime, trailing 2-0 after Ellen White had been awarded a second goal initially scrubbed out for offside, Cameroon coach Alain Djeumfa inflamed the anger.

“The referee wants England to win today,” Djeumfa said, according to an account of midfielder Raissa Feudjio.

As Cameroon seethed and wept at times on the field, there was at least one high-profile advocate of the petulant behavior: The head of the FIFA administration.

FIFA secretary general Fatma Samoura tweeted the Cameroon players “inspired many young girls,” with “passionate and talented play on the field that made your fans proud and your country is proud of you.”

The view from the Confederation of African Football was very different.

Isha Johansen, president of CAF’s women’s committee, said the match “reflected badly not only on African women’s football but African football on the whole” and wants punishments imposed.

“It is an issue which will be addressed and dealt with at the appropriate levels of governance,” she added on Monday.

But Samoura endorsed the conduct of players who openly undermined the authority of referee Quin Liang by forcing delays to restarts as they huddled to protest against England goals.

Instead, Liang was just following the laws of the game by allowing White’s goal to stand and then denying Ajara Nchout a chance to pull it back to 2-1 for another offside call that went against Cameroon on a video review. Nchout was in tears as angry teammates delayed the restart once again.

England players seemed more clued up about the application of VAR and the laws after pre-tournament briefings before flying out.

As the opposition anger boiled over, the English just waited for it to subside.

“As soon as you get caught up in that, or get worried about it,” defender Millie Bright said, “you will lose momentum in the game. We stayed away from it.”

Unlike some Cameroon fans in the stadium, who moved into seats right behind the benches where the coaches and fourth official sit. It led to issues which FIFA tried to explain away in a contorted statement after Neville reported hearing of fighting in the stadium’s area.

“A number of Cameroon fans had moved to the seats behind the team benches during the match in order to create a ‘fan block,’” FIFA said. “This required management by stadium stewards who, in the interests of all spectators, moved other ticket holders into hospitality seating.

“Although there was some verbal exchange between Cameroon supporters and stewards, there has been no report of any physical confrontation.”

FIFA was silent on action against the team itself, or any criticism of disobedience that led to the most chaotic scenes in Women’s World Cup history.